Uncertainty Rules as DNUSD Prepares to Adopt Its 2020-21 Budget This Week; GATE Program On List of Proposed Cuts 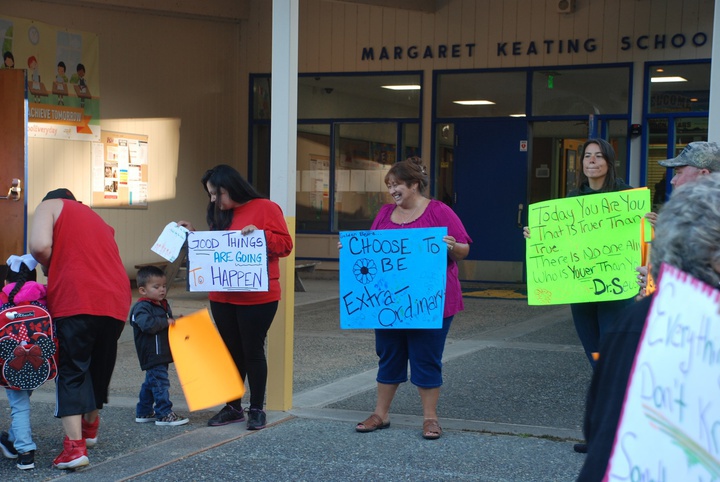 Parents, grandparents and staff welcome students back to Margaret Keating Elementary School at the start of the 2019-20 school year. Photo: Jessica Cejnar

Layoffs weren’t on the table, but representatives of Del Norte Unified School District’s teaching staff argued that many proposed cuts to the 2019-20 and 2020-21 budgets would “hurt kids.”

They especially took issue with a proposal to suspend the Gifted & Talented Education program, though it could save the district $27,862, according to a report from Assistant Superintendent of Business Jeff Napier.

“They’re all really important,” Del Norte Teachers Association president Marshall Jones said Thursday of the proposed list of reductions. “These kids are special. They need additional work. These are kids whose brains need to be expanded, and I believe that budget (item) should stay there.”

On June 4, Napier had presented the Board of Trustees with a preliminary 2020-21 budget that included a projected $1.1 million deficit. Trustees had directed staff to cut expenses as much as possible without laying off staff.

On Thursday, Napier produced a list of about $1.2 million in proposed reductions that included suspending GATE, lowering the textbook budget from $400,000 to $100,000 as well as cutting the budget to replace DNUSD’s vehicles and ChromeBooks for students.

Each individual school also took about a 10 percent reduction to its budget, Napier told trustees. These include dollars for after-school programs, attendance incentives, parent engagement and services to low-income, foster and homeless students and English language learners.

Napier also presented a list of “unfunded staff vacancies” that will be removed from the budget, saving the district about $1.1 million in salaries and benefits.

On Monday, Napier said DNUSD was able to close a $500,000 deficit for 2020-21 and its Board of Trustees will adopt a balanced budget on Thursday.

But because the district used one-time money that needed to be spent by the end of the year to balance its 2020-21 budget, DNUSD faces a cliff, Napier told the Wild Rivers Outpost. The district faces projected deficits of $2.136 million in 2020-21 and $3.33 million in 2022-23, according to his budget presentation.

“Depending on what the state budget looks like and what the economic outlook looks like, we still have to plan for more cuts,” he said. “But we don’t know how things are going to shore up for next year.”

State issues and deferrals
Though Del Norte Unified School District must adopt its 2020-21 budget by June 30, because of changes at the state level, Napier said he expects to bring revision to the Board of Trustees in August and then in December.

In his presentation Thursday, Napier included a comparison between California Governor Gavin Newsom’s revised budget proposal in May and a version the Legislature developed and submitted back to Newsom last week.

On Monday, Napier noted that both Newsom and the Legislature reached an agreement, but because their agreement is based on whether California receives about $15 billion in federal relief dollars, things are still uncertain.

“The Legislature was, ‘we’re going to assume we’re getting billions and billions, go ahead and budget that money,’” Napier said. “And the governor’s May revise said, ‘hope you get the money and if the money does come we’ll rescind those cuts.’”

On Monday, the final budget agreement proposes cutting the statewide budget by $12 billion, the Los Angeles Times reported. According to the Times, the state would tap into its cash reserves to alleviate parts of the projected deficit.

Napier, however, said there weren’t any “real details” out about the budget agreement between Newsom and the Legislature. The Legislature has to draft a new budget to submit to the governor, though now they’re both “on the same page.”

Napier said he favors the governor’s more pragmatic approach to whether or not to budget for the $15 billion in federal relief dollars through the Coronavirus Aid, Relief and Economic Security (CARES) Act. Once the year starts certificated staff can’t be let go as per their contract, he said.

Both budget versions called for deferring funds if California doesn’t receive CARES Act dollars by Oct. 1, Napier said Thursday. Newsom proposed deferring $1.9 billion for 2019-20 and $3.4 billion to 2020-21 to the following fiscal years, according to Napier’s presentation.

The Legislature proposed adding $4.6 billion in 2020-21 dollars on top of the $3.4 billion that Newsom is proposing if California doesn’t receive that federal funding, according to Napier.

“The way it’s worded in the Legislature’s budget, if on Oct. 1 we do not get federal money, we stop all state apportionments in February,” Napier told trustees on Thursday. “They took June away this year. We know we’re not getting June next year. They’re going to take February, March, April and May next year, so we’ll go five months without getting state apportionments of unrestricted funds. We’re looking at 45 percent of our unrestricted money being deferred into the following year.”

According to Napier, 45 percent of the DNUSD’s unrestricted apportionment is about $17 million in state dollars it wouldn’t receive until after June 30, 2021. However, he said, the state only apportions funding 12 times per year unless the Legislature grants schools more apportionments.

During the recession, the state deferred funding for DNUSD for about four years, Napier said. In 2013-14 and 2014-15, DNUSD received lump sums in one-time money to pay back the prior years’ deferrals, he said.

“If we start getting into a position where we’re having to borrow a lot of money for deferrals, to bridge into next year, we’re not getting any more money the next year,” Napier told trustees. “There may be additional cuts because those deferrals are then going to defer to the next year. You get into a cash crunch where you’re borrowing money to pay off money that you’ve borrowed and all of your money that you’re getting from the state is paying off what you’ve borrowed.”

DNUSD cuts
In his budget proposal Thursday, Napier produced a list of items that had already been removed from the 2020-21 budget.

This included $100,000 to replace DNUSD vehicles not counting its bus fleet. Other items removed from the 2020-21 budget included a maintenance position, which would save DNUSD about $72,000; implementing timecards, saving the district $50,000; and cutting the district’s contribution for technology replacement, saving $100,000 for 2020-21.

One of the unfunded staff vacancies include a vice principal at Del Norte High School, according to Napier.

Next year, Alison Eckart will take over Randy Fugate's position as principal, while Robert Hadfield will continue as its dean of students.

But if DNHS only sees half its normal student enrollment on campus due to ongoing restrictions from COVID-19, it may not need a second administrator, DNUSD Superintendent Jeff Harris said. He also pointed out that the district doesn’t know what athletics next year will look like.

“The (California Interscholastic Federation) is allowing for conditional and summer training, but actual play is up in the air,” Harris said, adding that some of the positions on the list have been vacant for a long time. “Let’s see what this looks like before we start hiring positions back because it’s what we’ve always done.”
Noting that many of the unfunded positions serve special needs students, Trustee Charlaine Mazzei said many of those services, especially behavioral services, may be billable to MediCal.

DNUSD is currently working on becoming a national provider identifier to be able to bill MediCal for some of the services it provides students, Harris told Mazzei. He said he’ll ask staff with the Del Norte County Office of Education to provide information about that process to the Board of Trustees at a future meeting.

During public comment, Danielle Ramsey, a school counselor at Del Norte High School, said she was informed that the high school is losing a counselor position. She said she asked a colleague who experienced cuts during the recession who indicated student contact often suffers when staff is reduced.

“Parents and students that would come in to talk to a counselor (that’s) scheduled out three or more weeks,” Ramsey said, adding that based on student enrollment at the high school counselors can expect to have a caseload of roughly 530 each. “She said that academic plans were not done for every student and that they were unable to sit with seniors to help them register for classes at college.”

Group counseling for anxiety and depression will likely be among the items cut due to a reduction in staff at the high school, Ramsey said. She asked trustees to keep another counselor at Del Norte High School and potentially have a third assigned to Sunset High School and Del Norte Community School.

“I understand that we are facing tremendous budget cuts and that sacrifices have to be made,” she said. “But I would urge the district to consider data and student need when making these decisions. Is counseling where this needs to happen?”

Sarah Mitchell, vice president of the local California School Employees Association chapter, which represents the district’s classified staff, said she was happy to hear there were no layoffs planned, but said that wasn’t what her bargaining units were told.

Paige Thompson, lead negotiator for DNTA, said after meeting with CSEA and district representatives, the union representing teachers and other certificated staff asked for cuts to be made as far away from students as possible. Though she said she appreciated the Board of Trustees needed to process Napier’s presentation, Thompson urged them to talk to CSEA and DNTA so they could get a bigger picture.

Thompson also praised Ramsey’s request for another counselor at Del Norte High School, but said many of the empty positions are vacant because the district “can’t fill them.”

“It’s because we’re not competitive enough to fill these positions,” she said. “Are we able to, literally, survive every day without them? Yes, but at what cost? Just because a job is not filled doesn’t mean it’s not needed.”

The DNUSD Board of Trustees will meet at 4:30 p.m. Thursday. The district meeting will be preceded by the County Office of Education meeting at 4 p.m. Thursday. For instructions on participating via Zoom as well as agendas, click here.