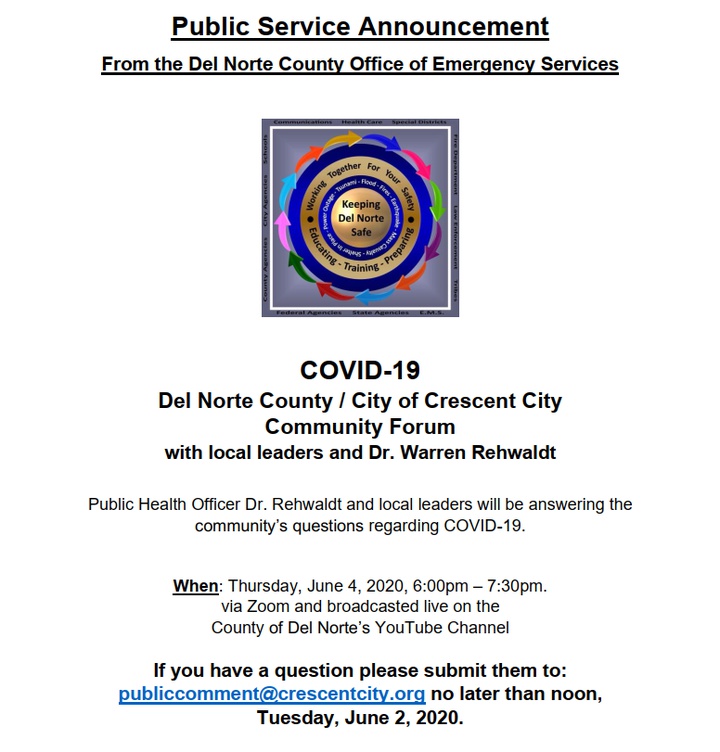 Pointing to his dual role as an elected official and religious leader, Blake Inscore says his church must be held to the highest of standards.

If this means First Baptist Church doesn’t open its doors even though California Governor Gavin Newsom has brought worship services into Stage 2 of his reopening plan during the COVID-19 pandemic, so be it, Inscore says.

Speaking to the Wild Rivers Outpost following a report from Del Norte County Public Health Officer Dr. Warren Rehwaldt to the Crescent City Council on Monday, Inscore said the church’s leaders are anticipating opening its sanctuary on June 21. But if the congregation feels it’s not ready, the church will continue to live stream its services, he said.

“Today was the first day we got confirmation that our plan was acceptable,” Inscore told the Outpost on Tuesday. “I had used a date as June 14. I don’t think we’ll be ready by June 14 at this point in time because one of the things (we) wrote into the plan is we would do a sufficient amount of education for our congregation of what expectations were before we opened.”

Rehwaldt’s presentation to the Council comes ahead of a community forum he’ll participate in via Zoom on Thursday.
He gave Councilors an update on the new community-based testing site established at Del Norte High School on Friday and reported the latest COVID-19 statistics in Del Norte County. The community has seen 47 confirmed cases, of which 26 are considered recovered as of 4:36 p.m. Tuesday, according to the Public Health Branch.

“From our perspective, they have progressed long enough in their healing from their case of COVID-19 that we don’t consider them infectious anymore,” Rehwaldt said, explaining to the Council what recovered means. “If you need to go back to work, you’re able to do that at that point as long as you’re not having any complications from anything related to COVID-19.”

He said he expects those statistics to increase as results come in from the new testing site.

Much of Rehwaldt’s message centered on Newsom’s press conference last week on the state’s four-phase Roadmap to Recovery.

Though the state as a whole is in Stage 2, for counties that were granted a variance to move through the reopening plan faster, barbershops and hair salons can serve clients — something that had been listed in Stage 3 — Rehwaldt said.

Newsom also announced that places of worship can reopen if their congregation follows social distancing guidelines and wear masks, according to Rehwaldt. Under the state’s guidelines, they’re only allowing gatherings of up to 25 percent of the capacity of a facility’s building or 100 people whichever’s lower, he said.

However, Rehwaldt said, the state is leaving it to local public health officers to decide what is reopened and how quickly. He said he expects the California Department of Public Health and the governor’s office to release guidelines on other categories of reopening.

“Some of these things that seem so innocent from our perspective, they’re kind of a high risk environment — face-to-face contact or a big group of people in a relatively small space," Rehwaldt told the City Council. “If they’re not using precautions it’s a recipe for someone to get sick and to transfer (the virus) to people all at once. We’ve had enough changes in this county we need time to measure the effect and see what happens.”

Rehwaldt said he’s spoken with several pastors who have indicated they’re not resuming in-person services until about mid-June. He noted that those who have submitted reopening plans, however, are doing a good job.

“Most of them are hitting the high points and getting the idea down pretty well,” Rehwaldt said. “Most people are going to be protected most of the time. We just don’t have a good way of knowing in advance how much ramping up activity will move the virus around in a way that’s hard for us to handle.”

First Baptist Church can handle up to 200 people during big events like funerals or weddings, but it averages roughly 50 people during Sunday worship services — or it did before the March 19 stay-at-home order, Inscore said. When he submitted the church’s reopening strategy to Rehwaldt, Inscore said he used 50 people as a target number.

Before services, church volunteers will survey attendees, asking if they or anyone they know had been sick and if they’ve had any contact with anyone potentially exposed to COVID-19, Inscore told the Outpost. They’ll also be asked to use hand sanitizer and wear masks, though if someone can’t wear a face covering for medical purposes, they’ll receive accommodations, he said.

“People from the congregation, from the community, have asked, ‘What are you going to do if somebody comes in and won’t abide by your guidelines?’” Inscore said. “My answer has always been, ‘I’m not really sure.’ That’s something that’s going to be hard for me to understand, why somebody would want to make an issue at church.”

Volunteers at First Baptist Church will also wipe down pews and other hard surfaces, including those in the bathroom, Inscore said. The church has installed touch-less paper towel and soap dispensers in the bathroom. Volunteers have also configured seating layout at the church to enable people to stay six-feet apart, Inscore said.

“Right now we’re doing (all that) via Zoom and we don’t intend to change that yet,” he said. “We need to get into a routine of cleaning and all those protocols before I have a nother service during the week and I have to have volunteers to greet people and survey people and then clean up after people.”

The COVID-19 Community Forum will be held from 6 p.m.-7:30 p.m. Thursday and will be streamed live via Zoom and the County of Del Norte’s YouTube Channel.