In A World of COVID-19, Providers Wrap Heads Around Hosting Youth Camps, Other Programs Safely 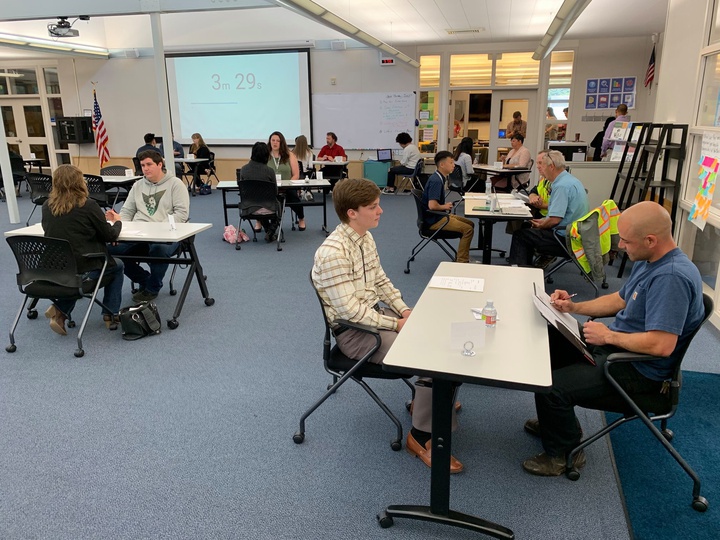 Running a youth day camp in the middle of a pandemic may sound daunting, but, Grace Hamaker said, it doesn’t have to be.

Speaking to representatives of nonprofits, church groups and others hoping to provide activities for Humboldt and Del Norte County youngsters during the summer, the executive director of Redwood Discovery Museum in Eureka said they’re likely already doing the work necessary to keep their charges, and their employees, safe from COVID-19.

“As program directors in working with youth, you have a lot of these practices already in place,” Hamaker said Thursday. “They’re just getting detailed on practices. It’s not so much revamping, it’s adding an extra layer.”

“They” is the Wild Rivers Community Foundation and the Humboldt Area Foundation, which awards grants ranging from $250 to $2,000 to organizations offering camps, theater, music, cultural and other educational opportunities to children during the summer.

Thursday’s meeting was the first of two that focused on creating safe plans during the COVID-19 pandemic, WRCF Director Gina Zottola said.

According to Scott Graves, spokesman for WRCF, people had submitted those Summer Youth Mini Grant applications months ago.

“Now with COVID-19, we want to show that we did a little due diligence in checking to make sure they have plans in place,” he said. “To make sure we’re supporting organizations that had taken the time and made the effort to ensure youth and employees and volunteers were taken into consideration.”

“They” also include the Del Norte and Humboldt County public health branches, along with the California Department of Public Health. Del Norte Public Health Officer Dr. Warren Rehwaldt, along with his counterpart in Humboldt County, Dr. Teresa Frankovich, went over CDPH guidelines, though they also urged providers to read guidance on operating daycare facilities during the pandemic.

In addition to submitting additional information to the Wild Rivers Community Foundation and Humboldt Area Foundation on the measures they’re taking to keep kids and staff safe, providers of youth activities must also submit plans to local public health professionals.

CDPH had released guidelines on day camps Friday for counties that had received a variance to move at a faster pace through California’s Roadmap to Recovery reopening plan, Rehwaldt said.

As of 8:12 a.m. Thursday, Del Norte County has one active COVID-19 case, bringing the number of total confirmed cases to 48, according to the Public Health Branch. Humboldt County reported three cases in the last week, Rehwaldt said Wednesday. And in Curry County, north of the state border, there have been a total of seven cases altogether, he said.

Though small number of local cases, compared to elsewhere in California, is encouraging, Rehwaldt said, they can also be deceiving as things can change quickly.

“Getting kids together is one of the places where virus transmission is probably going to happen quite a bit and if people keep that in mind going into this, it helps a great deal,” he said. “Day camps, from my perspective, are a trial balloon of what to expect this fall when school starts.”

Zottola also pointed people to the Del Norte Economic Resiliency Branch and its coordinator Holly Wendt, who will hold a training from 3 p.m. to 4 p.m. Tuesday to discuss what providers of youth activities need to include in their individual plans.

Wendt, Crescent City's recreation and special events director, said she’s working on a reopening plan for Shoreline RV Park. She said she’ll put together a model plan youth activity providers can work off of when submitting their individual plans to the Public Health Branch.

“Having the checklist for knowing what to talk about and what to cover is critical,” she said. “A key component is training staff and educating parents and kids. While you’re planning activities, right now is the perfect time to start wrapping your head around the space the layout, how you’re going to do it…. It will not only help you feel better, it will help you train your staff, and you can get that out to parents and youth before they ever show up.”

Both Rehwaldt and Frankovich started the discussion by addressing the overall number of people, including staff, involved in the program — 10 to 12, maybe less in a camp setting, Rehwaldt said.

They also discussed teaching frequent hand washing, coughing or sneezing into an elbow and the use of hand sanitizers in a youth activity setting. Rehwaldt said he’s also a believer in the use of face coverings or masks to prevent disease transmission. He suggested turning mask-wearing into a game or a teaching moment, but said it’s more important in indoor venues.

Rehwaldt also discussed contact with others, disinfecting surfaces such as doorknobs, tabletops and anywhere else people can put a hand on. He also touched on playground equipment and toys kids may be sharing.

“Now’s probably not time to promote that,” Rehwaldt said. “It’s better to come up with a different scheme for hard-to-disinfect things between users.”

All activity providers need to have a plan for who checks signs and symptoms of illness and how aggressive they’re going to be about that, Rehwaldt said. They should have a plan in place and be consistent about it, he said.

Rehwaldt suggested day camps and other programs have a plan for what happens when a child gets sick. This includes being able to notify the proper people in the proper order, having a place for the child to go that’s isolated from other kids, he said.

Both he and Frankovich also suggested having a liaison, a go-to person for anything related to COVID-19. Frankovich even suggested having someone screen for symptoms on arrival, though she noted that parents should also be doing that for their children.

One key point Rehwaldt mentioned immediately had to do with low-risk settings versus high-risk settings. A small group of youngsters coming from one geographical area and stay together throughout the duration of the camp could be low-risk, he said.

“Moving virus around depends on moving people around. If you’re not introducing different persons into a new mix every day, it’s going to cut down on that possibility a lot,” Rehwaldt said.

One question came from Josie Brown, executive director of Lost Coast Camp, a wilderness sleepover camp program in Petrolia. She wanted to know what questions she should be asking parents during the registration process. This includes asking if there are family members at home who are high risk, whether a child has asthma or any other health issues.

“If the answer is yes to any of these questions, should they be excluded as a camper?” Brown asked.

Though he thought it’s worth asking if someone lives with a high-risk person, especially if the youngster has a medical condition that puts them in that category, Rehwaldt said whether they should be excluded from the activity is up to the organization. However, he said, any potential risk of serious illness would be amplified in a camp setting.

Another question from Anthony Trombetti concerned whether it would be appropriate for people to sign a release of liability that specifically refers to COVID-19.

Rehwaldt suggested he discuss that question with an attorney, though he said illness from COVID-19 is definitely a factor.

Meanwhile, Wendt pointed out that in addition to keeping program participants safe, people need to ensure their staff’s safety. She referred to a workman’s compensation law regarding COVID-19.

“If an employee tests positive for COVID it is presumed they caught it from work,” Wendt said. “That’s very different than previous workman’s comp and legislation.”

Though he, too, said running a youth program during a pandemic is intimidating, Rehwaldt urged people to follow Wendt's advice.

“I think this is well worth the effort,” he said. “Our kids have been paying the price for this pandemic in a lot of ways. If we can do something to take that away (it’s) worth the effort.”