« Friends Rally Around Local Woman's Search for a New Kidney, Reach Out to Fellow Del Norters For Help 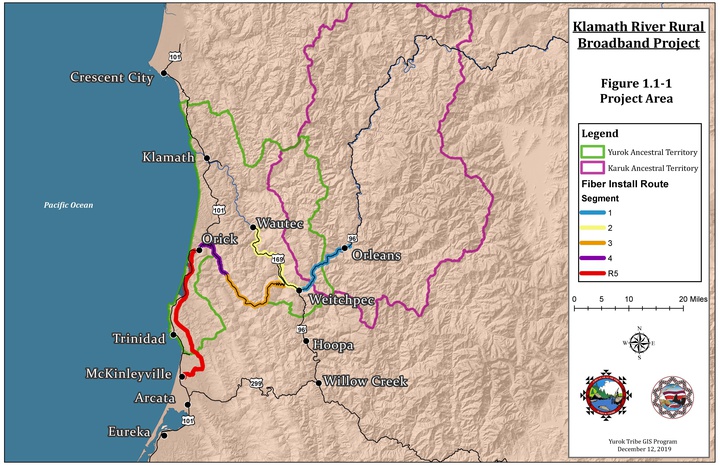 Map courtesy of the Yurok Tribe

The Karuk and Yurok Tribes’ Klamath River Rural Broadband Initiative (KRRBI) recently received an additional $10 million from the California Public Utilities Commission ’s Advanced Services Fund to install more than 100 miles of fiber optic cable in one of the most technologically and economically disadvantaged parts of the The Golden State.

“For the residents of far Northern California, t his initiative will produce more positive outcomes than almost any other public infrastructure project in the last century,” said Joseph L. James the
Chairman of the Yurok Tribe. “The installation of fiber will facilitate substantial progress in many different areas, ranging from public health to education and economic development to public safety. I would like to thank the CPUC for the funding to complete this pivotal project"

“The installation of modern internet infrastructure will level the playing field in our rural communities For the first time, young adults will have an opportunity to enroll in online learning programs, instead of making the 4 hour roundtrip to the nearest university. Native artists and traditional tradespeople will be able to engage in digital commerce.

Our most vulnerable citizens will be able to take advantage of telehealth because of this project said Russell “Buster ” Attebery, Chairman of the Karuk Tribe. The benefits are endless. We greatly appreciate the CPUC’s investment in this historic undertaking, which will benefit all of the residents in our region.

When it is complete, the Klamath River Rural Broadband Initiative will provide high-speed internet to nearly 670 tribal and non-tribal households in addition to approximately 170 non-residential entities, including multiple health care clinics, public schools and tribal offices. It will serve a wide variety of tribally owned and private businesses as well support economic growth. The fiber optic line will also improve the communications capabilities of local law enforcement and other first responders.

The approximately 104-mile-long fiber-optic line will travel from the communities of Orleans to Orick, and from Weitchpec to Wautec. In between Weitchpec and Wautec, it will branch over the Martin’s Ferry Bridge, across Bald Hills Road and south to Orick on US Highway 101.

Delivering internet speeds comparable to those found in cities, the project will create a redundant link for the Karuk Tribe’s Áan Chúuphan ISP and Yurok Tribe’s microwave network and will establish a third redundant link for Humboldt County. Redundancy, as it relates to internet equipment, is required for maintaining connectivity during a natural disaster, such as an earthquake, a flood or a forest fire, all of which frequently occur in this region.

The Klamath River Rural Broadband Initiative was established in 2013, when the Karuk Tribe secured a highly competitive, $6.6 million dollar grant from the CPUC’s California Advanced Services Fund. Shortly thereafter, the Yurok Tribe and Karuk Tribe together contributed another $8 million in matching funds toward the undertaking to fundamentally improve the lives of hundreds of families in this remote and chronically underserved area.

• The Karuk and Yurok tribes will conduct market study analysis and comprehensive business plans for
operations once KRRBI is complete.

• The Karuk and Yurok Tribes will apply for the FCC Tribal Priority Spectrum Window that opened in February 2020 and closes in August 2020 to gain licenses in the 2.5 GHz spectrum.

• An RFP will be posted seeking a contractor to obtain the easements for the KRRBI fiber route.

• A comprehensive environmental analysis is underway to meet federal and state environmental regulations. Completion of the EA is expected in mid-2021.