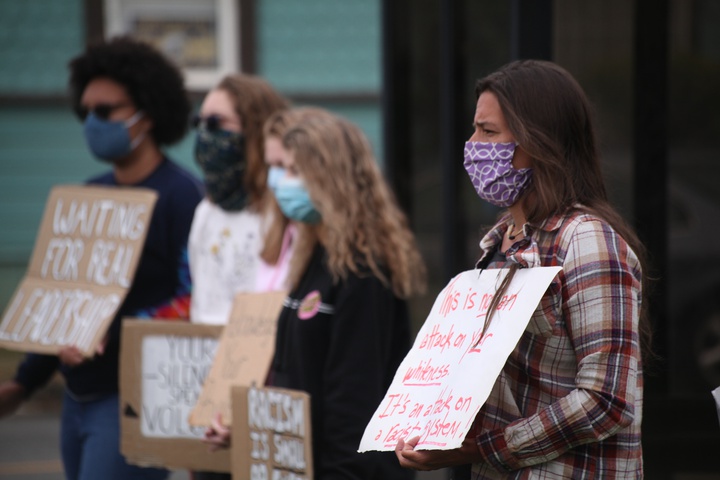 Members of the public chastised Del Norte County District 1 Supervisor Roger Gitlin, accusing him of fomenting bigotry and racism, and calling on his colleagues to censure him.

In addition to speaking at the Board of Supervisors’ meeting Tuesday, a small group of protesters gathered in front of the Flynn Center holding up signs proclaiming Black Lives Matter and urging those who condemn racism to speak out.

“He has incited violence by encouraging community members, my neighbors, to basically erase what we have done in our community, what we are doing in our community,” said Denise Doyle-Schnacker, one of the organizers of an Anti-Racism Rally in Del Norte. “I’m very concerned about the fact that the other supervisors have not said one word against the racism, the bigotry, the misogyny (and) the hate speech their colleague has decided to spew in our community.”

The concern stems from a handful of posts Gitlin made on his Facebook profile recently. On Saturday, he posted a picture of a Billboard paid for by the California Endowment depicting people of color wearing masks to combat COVID-19.

The masks carry messages advocating for universal healthcare, protection for elders and dreamers and paid leave. One person in the center of the image wears a mask with “Black Lives Matter” emblazoned on the front.

"Shame on the California Endowment!

Inserting the very serious COVID-19 pandemic dilemma into politics, the California Endowment has mixed partisan divisive opinion with public health erecting this billboard(s) entering Crescent City. Those who thought long and hard on who and what should appear on public display failed abysmally in bringing our community together. ALL LIVES MATTER should have been the message, a message of bringing our diverse groups together. Noticeably missing is any reference to European-American inclusion. The face declaring the ending of racism only underscores the racist mindset of the California Endowment. The inclusion of the clenched fist sends a terrible message to our community. Tragic!
The billboard is exclusionary and insulting to Del Norte County and changes no minds, further polarizes us and widens the Grand Canyon-esq gap between our diverse cultures. This shameful display should be taken down immediately and continued funding for the California Endowment should be re-considered.”

The California Endowment is a private health foundation created in 1996 when Blue Cross of California acquired WellPoint Health Networks. It has more than $3 billion in assets and has funded the Building Healthy Communities Initiative, which has been in Del Norte County since 2010.

In a Tuesday Facebook post, Gitlin again addressed the California Endowment billboards, stating that their messages “widen the chasm which prevents mutual respect for the various cultures which exist in Del Norte County, IT IS EXCLUSIONARY.”

Another Facebook post that drew consternation from the community stems from July 10 and contains a quote attributed to Franklin Graham lamenting the end of the American Dream following the 2012 re-election of President Barack Obama.

In his post, Gitlin says Graham delivered this speech at the Congregation of the 1st Baptist Church of Jacksonville, Florida.

“Franklin’s every word speaks for me and millions of other Americans,” Gitlin wrote.

According to Snopes, however, it’s unclear who made that speech.

On Tuesday, in addition to calling him out for his Facebook posts, Klamath resident Chrystal Helton said Gitlin disregarded the Yurok Tribe’s sovereignty by encouraging people to visit the Log Cabin Diner in May. The diner is within Yurok Reservation boundaries and due to COVID-19, the reservation was closed.

“To the people who live in Klamath, Gitlin you showed us that you have no regard for us or for the sovereignty of the Yurok Nation,” Helton said. “The Yurok Reservation has had no cases of COVID-19 and Council has kept the reservation closed because we are an high-risk community. Gitlin, your actions cause division throughout the county.”

Helton also called out District 5 Supervisor Bob Berkowitz, who represents Klamath residents, for not speaking out against Gitlin’s invitation for people to eat at the Log Cabin Diner even though the reservation was closed.

Outside the Flynn Center just before Tuesday’s meeting began, Will Meriwether, a political science professor at College of the Redwoods’ Del Norte campus, said he was demonstrating because Gitlin “basically said unless you’re a white Anglo-Saxon Protestant, you do not belong to the community.”

Meriwether, whose sign stated “Love thy Neighbor, No Exceptions,” said Gitlin’s colleagues should censure him for his words.

“Either censure him or make a public statement that they do not support Gitlin’s stance,” Meriwether said. “Their silence is acceptance. Throughout history, silence has always been known as consent.”

Supervisors Chris Howard, Lori Cowan and Gerry Hemmingsen didn’t stay quiet, though Hemmingsen said Gitlin’s words “doesn’t come to the level of talking about it, in my opinion.”

“There is no value in what he’s saying,” Hemmingsen said of Gitlin. “He’s just insighting things. That’s just my opinion, which is certainly different than his.”

Howard and Cowan said they received phone calls and email from constituents about Gitlin’s comments regarding the California Endowment billboards. Howard also brought up a statement former Del Norte County resident Julia Dorman made at the board’s July 14 meeting, saying there’s no room for “these kinds of actions or comments from a sitting supervisor.” Howard said the people he’s spoken with have said they've been retaliated against for speaking out against Gitlin.

“There is absolute fear by individuals who have called me who are actually speaking out against this particular supervisor,” Howard said. “For reasons of retaliation and responses that have been made through emails that have been shared with other people that are supportive of Supervisor Gitlin and calling out their businesses specifically or where their parents even work. That kind of retaliation strikes fear into the hearts of people in our community.”

In an interview with the Wild Rivers Outpost following the July 14 Board of Supervisors meeting, Dorman said she received a handful of emails from Gitlin’s supporters after her statement during the public comment period.

Dorman, who had sent an email to the Board of Supervisors before the July 14 meeting, said she believes Gitlin shared her message and email address with his supporters. She said he also blocked her from his Facebook profile. Though it’s his personal profile, Gitlin uses to make announcements as a county supervisor.

“It was a little surprising to me to have my email shared with people I don’t know,” Dorman told the Outpost. “I live in Seattle so I haven't been contacted in other ways, but I do know somebody shared a post with my mom that they saw about me (that) referenced my mom and her business and included that in the Del Norte Journal (Facebook page).”

In response to Howard’s comments, Gitlin again called the California Endowment billboard offensive, divisive and racist. He said he doesn’t hate anyone, but his opinion is different than Howard’s.

“We must recognize that opinions different than the ones we hold must be tolerated,” he said. “It’s a two-way street and when I see a billboard which promulgates a racial group above another that’s, in fact, racism. It’s a minority racism and it should not and cannot be tolerated.”

Gitlin also referenced Doyle-Schnacker’s comment, saying that those who took offense at his words “ought to learn how to tolerate and embrace those opinions.”