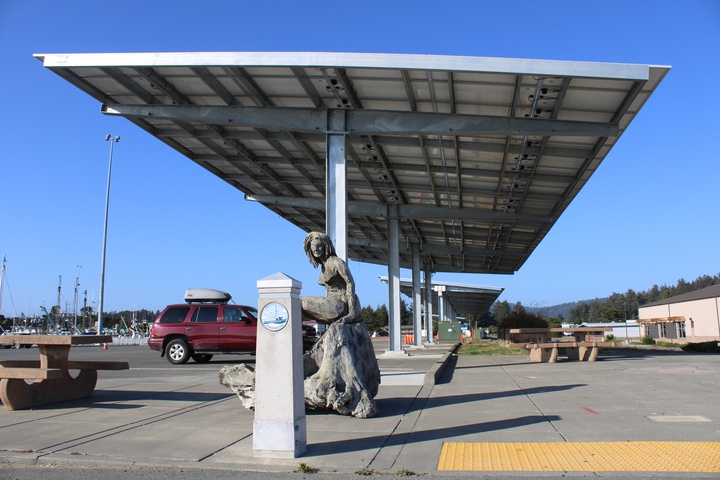 Construction on the Crescent City Harbor's new solar canopy system was finished June 22. A new service panel and transformer need to be installed before it's operational, however. Photo: Jessica Cejnar

But Pacific Power and Light must upgrade a service panel and transformer at the foot of Citizens Dock before it begins to generate electricity, said Renewable Energy Capital CEO Alex Lemus told port commissioners on Tuesday.

The 156 kilowatt rooftop solar system and the 420 kilowatt solar canopies were installed on June 22 and have passed county electrical and building inspection, Lemus said. REC is waiting on Pacific Power to receive the specifications for the equipment that will power the solar canopies, he said.

“The 156 kilowatt rooftop system on the old Albers roof and Pacific Seafood roof is ready to go,” he said.

Lemus told commissioners that he’s been communicating with the utility about the service panel and transformer. Installing the equipment will take up to three days depending on the weather, he said.

Meanwhile, REC has already begun to design Phase 2 of the harbor’s overall system, Lemus said. This will include installing panels that will generate between 1 and 1.5 megawatts of electricity, he said, anticipating that it will offset nearly 100 percent of the Harbor District’s electric load.

“I think it’ll take us, the same engineering team, 60-75 days to get it permitted because we know the exact process,” he said. “We intend to use the exact same equipment to come back and build Phase 2.”

In other matters, commissioners on Tuesday unanimously approved sending out a request for proposals to find developers for its land-based assets with the goal of generating revenue for the port, according to Harbormaster Charlie Helms.

Commissioners’ decision included approving a $5,500 agreement with Arcata-based PlanWest Partners to draft the request for proposals document and a scope of work.

Developers will be able to tell commissioners about their proposed projects, including how they will obtain the necessary permits and finance it, Blodgett said.

“It would give them an opportunity to propose something that will benefit the area,” she said. “People who bid on this could come from anywhere.”

Helms said he would work with Blodgett to prepare the draft request for proposals before bringing it back to commissioners for discussion and approval. In his staff report, Helms pointed to a $300 million plan by Dana Point to bring retailers, restaurants and lodging facilities to its harbor. Port San Luis also released a request for proposals to redevelop the Harford Pier, according to Helms’ staff report.

“Some of the goals of the Dana Point proposal were to select a proposer with sufficient experience, financial resources and personnel to enter into a public-private partnership with (Orange) County,” Helms wrote. “They wanted to maximize the harbor’s prominence and desirability in the market to provide a significant financial return to the partnership based on the profitability of the harbor.”

On Tuesday, Helms told commissioners that the Crescent City Harbor District’s request for proposals will ask developers to also discuss what the harbor’s share in revenue would be.

“I think we should keep it pretty open,” he said.