DNUSD Superintendent: 'The Board Doesn’t Feel A Strike Can Happen'; DNTA Negotiator Says Statement Is False 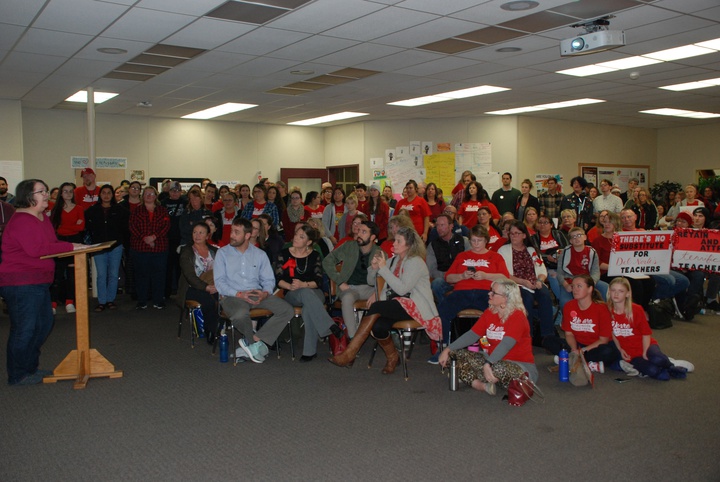 Former teacher Roberta King urged the School Board to end an impasse between the teacher's union and district over salary increases Thursday. Photo: Jessica Cejnar

School board members removed a resolution from Thursday’s agenda that would have doubled the daily pay substitute teachers get if certificated staff strike.

Speaking on behalf of the Del Norte County Unified Board of Trustees, Superintendent Jeff Harris said the resolution was stricken from the agenda because the district hasn’t imposed its “last, best and final” offer in contract negotiations with the Del Norte Teachers Association.

“Nothing has been changed on salary schedules or anything else,” Harris told the public Thursday. “At this point, the Board doesn’t feel a strike can happen.”

Red filled the school board’s chambers and flowed out the door as teachers, classified staff, parents and community members urged DNUSD to pass a 3.26 percent cost of living adjustment to its certificated staff.

During a public comment period that lasted three hours, a former DNTA representative, Mike Mealue, served recall notices to trustees and Harris. Current and former students praised their instructors for putting them on track to fulfill their career goals.

Parents of special needs students asked how a strike would affect their child’s progress if subs fill in for their regular teachers. Other parents said they would keep their students at home if teachers strike, while at least one substitute teacher indicated she would not cross a picket line.

Meanwhile, certificated staff were worried about their colleagues entering the profession.

Mary Peacock kindergarten teacher Lisa Sedgwick lambasted the board over the proposed pay increase for substitute teachers during a DNTA strike. She asked the Board of Trustees if they knew how their constituents would feel about the district spending that amount of money on subs.

Another, Amber Tiedeken-Cron, former DNTA president, channeled a mantra her students are familiar with — to be “safe, respectful and responsible.”

“It’s a power struggle at this point,” Tiedeken-Cron told the school board. “How badly do you want to be right to hurt that relationship? Think long and hard about that. How important is it to be right instead of doing the right thing?”

Luis Pelayo, a fourth-grade teacher at Smith River School, noted that though he paid $20,000 to earn a master’s degree to earn $15,000 more than a first-year teacher, he’s going to be OK. Not so first-year teachers, he said, who are having to pay $10,000 out of pocket for healthcare costs, reducing their annual salaries to about $40,000.

“I’m a lecturer in the credential program at HSU,” Pelayo said. “I want to brag about this district. Currently one of my students applied and came to Del Norte County, and I feel ashamed that she had to come to this type of environment.”

DNTA and DNUSD have been at an impasse in contract negotiations for the 2019-2020 school year since June 28. The district is currently offering certificated staff a 2 percent salary increase with 1 percent being retroactive and the other 1 percent contingent on enrollment staying static.

DNTA negotiators are pressing for a 3.5 percent salary increase and are asking for an increase in the money the district contributes to certificated staff’s health and welfare benefits, according to Thompson.

The first to speak during the public comment period, Mealue said during his 30 year tenure with DNUSD, he directed an election campaign that defeated two incumbents on the school board. As a DNTA president, Mealue said, he helped get Del Norte voters to approve a $25 million bond in 2008.

“In my opinion the current impasse has nothing to do with money,” Mealue told trustees. “It is about ego and power. I apologize to those trustees who have quietly supported employees, I just don’t know who you are.”

Mealue served trustees a notice of intention to circulate a recall position. He said this includes Harris’s position as Del Norte County Superintendent of Schools, which is an elected position.

“So far I have received no help from DNTA in this process,” Mealue said. “A successful petition drive will cost the district $60,000 in special election costs.”

DNTA and DNUSD met with a neutral arbitrator from the Public Employees Relations Board of California last month, who has issued a report. That report will be released to the public on Jan. 14, according to DNUSD’s website. The earliest DNTA can strike is Jan. 15, according to the school district.