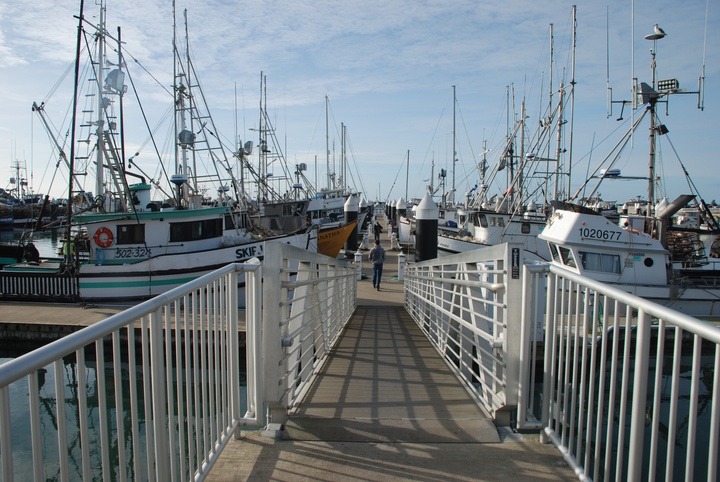 Fishermen get their gear ready for the 2019-2020 commercial Dungeness season at the Crescent City Harbor. Photo: Jessica Cejnar

Harbor and county officials are still figuring out the terms for how the port will spend funds generated by a transient occupancy tax increase voters approved in 2018.

Crescent City Harbor District commissioners on Tuesday discussed a proposed agreement with Del Norte County that grants the Board of Supervisors oversight over a facilities maintenance plan for the port. The ability to review and approve the harbor district’s maintenance plan was non-negotiable for the county, according to Autumn Luna, the port’s deputy legal counsel.

“Bottomline is we’re piggy-backing off the county to get this tax,” Luna told commissioners. “At some point we have to acknowledge that this is a partnership with the county because we need the county. I think they’ve been pretty generous in recognizing and responding to our concerns… without them we have nothing.”

Measure C was a citizen-led initiative spearheaded in 2018 by Rick Shepherd, president of the Crescent City Fisherman’s Marketing Association who was running for harbor commissioner, his colleague George Bradshaw and Don McArthur and John Roberts, who serve on the Del Norte County Unified School District board and Del Norte County Library District board.

Approved by voters, the initiative increased the transient occupancy tax (TOT) visitors pay to county hotels from 8 percent to 10 percent. It also established a 2 percent TOT on spaces rented at RV parks in the county.

Measure C only applied to lodging facilities and RV parks outside Crescent City limits. Revenue from the tax increase is meant to help the Crescent City Harbor District pay down a $5.425 million U.S. Department of Agriculture loan used to rebuild the inner boat basin following tsunamis in 2006 and 2011. Measure C dollars would also pay for repairs to the port’s facilities such as Citizens Dock and the Whaler Island Groin.

According to the proposed agreement between the harbor district and the county, the port’s loan payment to the USDA is $262,000 annually. Measure C dollars are deposited to a special account established by the county auditor-controller. The initiative requires a binding agreement between both parties to use the money for paying off the loan and financing harbor repairs and maintenance, according to the agreement.

Under the terms of the agreement, the county tax collector may retain 2.5 percent of the revenue collected through Measure C for administrative expenses. The agreement also states that the Del Norte County auditor will transfer $5,000 to the county counsel’s account for her staff’s work to interpret Measure C.

The agreement also allows county counsel to bill the Crescent City Harbor District against Measure C revenue for additional time spent to interpret and defend the initiative and agreement.

On Tuesday, Shepherd noted that all of the Measure C revenue will be used to pay off the USDA loan before repairing facilities. His colleague, Harbor District board president Brian Stone, agreed, saying that the tax won’t generate more than the port’s annual loan payment to the USDA.

“I don’t think we’re going to be in a position to draw on those funds for 25 years,” Stone said.

Carol White, who, along with Shepherd, was elected to the Harbor District board in 2018, said she wanted clarification on whether the Board of Supervisors would have to approve the port’s facilities maintenance plan.

“In the interim, while this gets resolved, are funds being withheld?” Carol White asked. “My question is at what point do we have to start submitting our plan?”

Measure C came about after harbor commissioners discussed ways to pay off the port’s USDA loan and fund roughly $11 million in necessary repairs. In 2017, Stone presented 11 options for making those loan payments and reducing the harbor’s deficit, which, along with raising the TOT, included a sales tax increase and a property tax assessment.

Stone began working with Shepherd following a 2017 California Supreme Court ruling involving the Southern California city of Upland, which allows for citizen-led tax initiatives to be subject to a 50-percent-plus-1 threshold rather than a 2/3rds majority to succeed.