(UPDATED) DNSO Says It May Have Identified Human Remains, But Is Still Waiting On DNA For Confirmation »

Former Teacher Seeks To Recall DNUSD Board, Superintendent of Schools; District States It Doesn't Have To Impose A Last, Best and Final 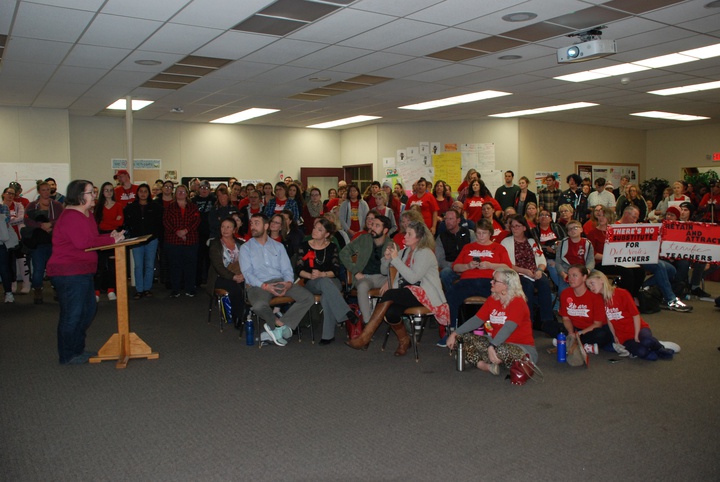 Roberta King urges the Del Norte Unified School District Board of Trustees to resolve an impasse with the Del Norte Teachers Association at a Jan. 9 meeting. Photo: Jessica Cejnar

As teachers continue to spar with the district over their 2019-2020 contract, a retired colleague has begun the recall process for each member of the Board of Trustees as well as the Del Norte County Superintendent of Schools.

Mike Mealue, who taught in Del Norte County for 30 years and is a former Del Norte Teachers Association president, told parents Thursday he’s taken steps to get the recall process going and was seeking help from those who wanted to be involved.

Mealue handed notices of intent to circulate a recall petition to each school board member as well as Superintendent Jeff Harris at a Jan. 9 meeting. On Thursday, he said he will appear before the Board of Trustees on Jan. 23 to discuss the recall effort.

“It will take months for a recall to take effect,” Mealue said. “After the recall petition is validated by the county, you have four months to collect signatures. It’s not one petition. It’s a petition for each of those people that we’re trying to recall.”

Mealue’s recall effort comes as the community digests a series of recommendations a neutral state-appointed arbitrator has offered to try to resolve the 11-month impasse between DNTA and DNUSD.

According to a post on DNUSD’s Facebook page, the Board of Trustees supports fact-finder Renée Mayne’s recommendation of a 2 percent salary increase every year through 2021-22 for certificated staff among other recommendations.

However, DNTA leaders are accusing the district of withholding information from Mayne, who was appointed by the California Public Employees Relation Board. According to Mayne’s report, her recommendations are based on the district’s offer of a 1 percent salary increase to certificated staff rather than its 2 percent total offer.

On Thursday, Mealue told parents he didn’t want to go through the recall process, but the amount of money in the district’s reserve budget — 9 percent when the state-required reserve is 3 percent — might be the largest reserve he’s seen.

“You need to have reserves in case of emergencies. You need to be solvent,” he said. “You also have to prioritize people over everything else. If you have good teachers in the classroom, students benefit.”

The Board’s District 4 seat is also up for re-election in November. That seat is currently vacant since its representative, Roger Daley, resigned earlier this month.

Because of timelines, a recall election won’t be able to be consolidated into this year's primary or general elections, County Clerk-Recorder Alissia Northrup told the Wild Rivers Outpost on Friday. It could also be expensive. The district would have to pay $40,000 to $60,000 for a stand alone recall election, she said.

As of Friday, Northrup said, though they didn’t have to respond, one trustee, District 2 representative Angela Greenough, responded to Mealue’s notice of intent. For his recall petitions to be successful, Mealue would need to get 20 percent of Del Norte County’s roughly 15,000 registered voters to sign.

“You’re looking at about 3,000 (signatures) per petition,” Northrup said.

There are a few caveats about trying to put together a recall election in the middle of a primary and general election cycle. For one thing, Magarino, whose first term comes to an end in November, can’t be recalled in the last six months of his term, Northrup said. The chances of Mealue getting a recall effort on the ballot within that six months is unlikely, she said.

According to Northrup, a recall election is a two-part process.
“If you get signatures for a recall then you open up the filing period,” she said. “The ballot is a two-part question: Shall these people be recalled and, if you vote yes, there would be people who would come in to fill the position.”

In her response to Mealue’s notice to circulate a petition to recall her position on the DNUSD Board, District 2 representative Angela Greenough admitted that she hasn’t been “as present in the schools” as she had hoped due to family and health challenges.

During her first term on the Board of Trustees, Greenough said, she and her colleagues searched for a new superintendent to replace one that had retired and oversaw the renovation of Del Norte High School while staying on budget.

“I continue to advocate for transparency in our schools and effective communication with the community, striving to ensure that all voices are heard,” she said. “… I strive to stay accessible in person, via phone, email, or social media. I actively listen and gather information to ensure that I make the most informed decisions, knowing that they impact our families and community.”

Mealue noted that a recall effort is a long process that will likely last longer than the current stalemate between the district and DNTA. On Thursday, Mealue fielded a question about voting no confidence in the Board of Trustees or Jeff Harris, saying he hasn’t approached that avenue yet. However, he said, during a DNTA membership meeting, certificated staff have discussed what they view as unfair labor practices against them on the part of the district.

“We cannot strike until that happens,” he said. “Now we are within a contract that expires at the end of August. That’s not going to deter us because to me, it’s important. It’s important for our community.”

Lathe Gill, California Teachers Association chapter consultant for Humboldt and Del Norte counties, said if the decision decides not to impose a last, best and final offer, then the terms of the contract are still in place. This includes a stipulation saying that DNTA will not engage in an economic strike unless the district imposes first.

However, Gill said, if the district is engaging in unfair labor practices, DNTA can file a case with the Public Employment Retirement Board. That case would begin with an informal conference and go to a hearing before an administrative law judge. Ultimately, Gill said, the case could go before the PERB board.

In another round of FAQs, the district states that public agencies aren’t required to impose and implement a last, best and final offer.

“There have been many cases by unions around California claiming public agencies committed an unfair practice or are bargaining in bad faith by refusing to implement its last, best and final offer,” DNUSD states. “PERB disagrees with them and lists on their website the following ‘Once an impasse has been properly reached, a public agency may implement its last, best and final offer.’ The provision is permissive not mandatory.’”

According to its website, DNUSD hasn’t imposed a last, best and final offer because it is offering to increase certificated employees’ salaries, not cutting their pay.

DNTA has been pressing the school district for a 3.54 percent increase to the salary schedule, according to the fact finder’s report. DNTA is also requesting an increase to flat-dollar stipends by 3.54 percent and increasing the district’s contribution to health benefits by $795 per eligible employees.

The factfinder’s report states DNUSD is offering to increase staff salaries by 1 percent. However, Harris and Human Resources Director Coleen Parker has told the Wild Rivers Outpost that the district is offering a total of 2 percent in salary increases to certificated staff with 1 percent contingent upon student enrollment. This statement was not reflected in Mayne’s report.

The district is also offering a $2,000 stipend for teachers at low performing schools and wants to keep its contribution to healthcare benefits status quo, according to the factfinder’s report.

DNUSD, meanwhile, is offering to keep health benefits status quo, according to the fact finder’s report. The district is also offering to increase all salaries by 1 percent, according to the report, and adding a $2,000 stipend for teachers at low performing school at the superintendent’s discretion.