Citing A Contract Between DNUSD and DNTA, Jeff Harris States A Teachers Strike Would Be Illegal 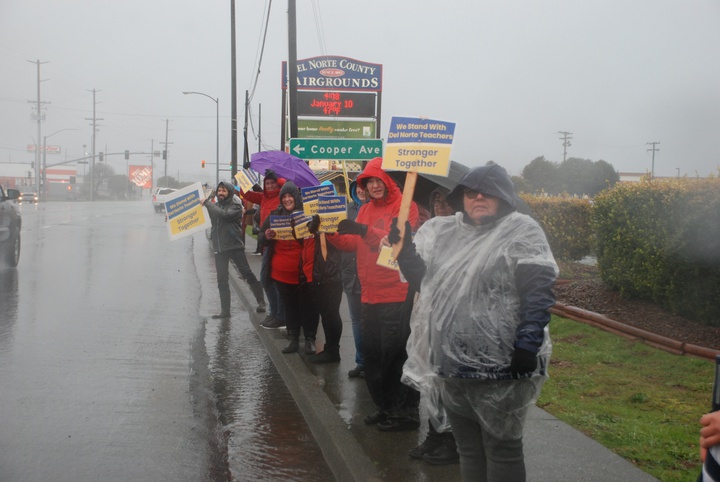 Teachers will be violating their contract if they strike next week, Jeff Harris told the Wild Rivers Outpost on Friday.

The Del Norte County Unified School District superintendent cited Article 4 in the professional agreement between the district and the Del Norte Teachers Association, which represents its certificated staff. His statement came as his employees stood in a frigid rain at the Del Norte County Fairgrounds, holding signs proclaiming “Stronger Together.”

Under the article, which governs concerted activities for both parties, DNTA agrees not to hold a strike, stop or slow down work or interfere in the district’s day to day activities. Meanwhile DNUSD will not impose a lock out, according to the contract.

“If, after the exhaustion of all aspects of negotiations including the completion of all statutory impasse procedures, the district actually imposes its last, best and final offer upon unit members, DNTA may proceed with lawful work stoppages (strikes) as long as they do not endanger the health and safety of students or threaten to disrupt the educational process,” the agreement states. “The district shall receive a 3 business days’ notice prior to any work stoppage to enable sufficient notice to parents and to obtain substitute personnel.”

Since the district has not imposed its last, best and final offer to DNTA, any teachers strike would be illegal, Harris told the Outpost. Further, he said, the district can only impose a last, best and final offer if it is proposing a decrease in salary or health and welfare benefits or a change in working conditions, none of which have been part of current contract negotiations.

“When you look the contract it explicitly states that during the term, the association agrees there will be no strike,” Harris told the Outpost. “If the district actually imposes a last, best and final (offer) DNTA may move forward with a strike.”

Harris noted that bargaining units for both DNUSD and DNTA have been negotiating as late as Thursday afternoon.

Though he had no comment in response to Harris’s statement regarding the legality of a teachers’ strike, DNTA President Marshall Jones said the California Teachers Association’s legal representatives have been advised of the district’s latest response.

“I’ll tell you this, we are doubling down, we are not deterred in any way,” Jones told the Outpost from along U.S. 101 on Friday. “We’re wet and wild!”

From the district’s perspective, a strike may be considered an illegal action, but no one will be fired or will be arrested if they do strike, Harris told the Outpost.

Both sides would exchange letters and notices prior to a strike and go to a state Public Employees Relations Board (PERB) representative for information on whether or not a work stoppage would be legal, Harris said.

If PERB states a strike is illegal, it can get an injunction against the action from a superior court judge, Harris said. Both parties would then work with their legal representatives to determine the next step, he said.

“Through my research there have been very very few illegal strikes in California,” Harris told the Outpost. “There’s not much precedent out there.”

As for finding someone to man classrooms if certificated employees strike, Harris said several classified staff members have the qualifications to sub. But the district would not be able to force them to act as substitute teachers, he said.

“If they do have the credential, we can ask,” Harris said. “We can’t force them to work in a different position.”

On Thursday, before sitting through a three-hour public comment period regarding the impasse DNUSD and DNTA representatives are at, the Board of Trustees removed a resolution from the agenda that would have doubled daily substitute teacher pay.

At that meeting, speaking on behalf of the Board, Harris told the public that since the district hasn’t imposed its last, best and final offer to DNTA negotiators, the Board doesn’t feel a strike can occur.

The school district currently pays substitute teachers between $115 and $150 per day. The resolution proposed increasing substitute pay to $366 per day if teachers strike.

Nearly everyone who spoke during the public comment period on Thursday supported DNTA, which is pressing the district for a 3.5 percent salary increase as well as an increase in the district’s contribution to their members’ health and welfare benefits.
Norma Williams, chapter president of the Del Norte County Employees Association, said her union stands in solidarity with DNTA.

“We know full well what it is like to have to negotiate long and hard to fight for equitable fair living wages, especially when we are being told time and again that we don’t have the money or the county doesn’t have the money,” Williams said. “From what I’ve been hearing and what I’ve been seeing, your district and your administration has not been dealing fairly with these teachers. They deserve what they are worth. Pay them what they deserve.”

“Please honor the request of district teachers seeking fair compensation for their incredible efforts,” James wrote in a letter to the Board of Trustees. “These hard-working professionals are vital to the success of our community, our children and the future success of the county at-large.”

According to Harris, the district is still offering teachers a 1 percent salary increase that would be placed on the salary schedule and would be retroactive to July 1, 2019.

The district is also offering another salary increase of 1 percent, which, though it too would be retroactive, would be contingent upon student enrollment in order to become a permanent part of the salary schedule, Harris said.

Both parties met with a neutral third party representative of PERB last month and have since seen the recommendations she has made in a report. That report won’t be made available to the public until Tuesday.

According to Jones, the earliest teachers can strike is Wednesday.