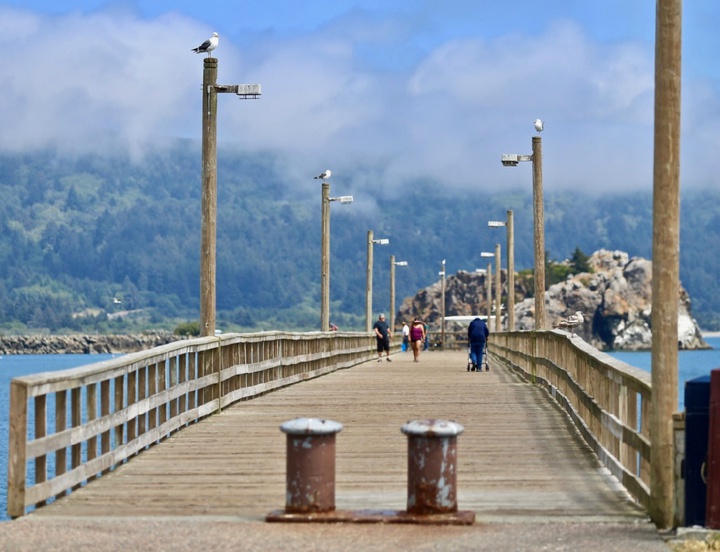 Crescent City staff and elected officials are throwing their weight behind a local movement to get HGTV to give its downtown area a much-needed makeover.

Spearheaded by residents Valerie Smith and her mother, Fran Makowsky, the local initiative is gathering material to submit an application to the cable television network. Featuring Ben and Erin Napier, “Home Town Takeover” is a new six-episode series scheduled to air in 2021.

According to the show’s description, the couple helped revitalize the downtown in their hometown of Laurel, Mississippi, and want to expand their horizons.

“Through Tuesday, February 4, 2020, any citizen of a small town (population 40,000 or less) who loves their hometown can go to HGTVHomeTownTakeover.com and log on to the show, tell — and sell — HGTV on why theirs is the one town most deserving to be featured in the special series,” according to a Jan. 7 announcement from the network.

On Monday, with Fran Makowsky and her husband, Tim, in the audience, Crescent City Manager Eric Wier received unanimous support from City Councilors, who approved its submitting the application to HGTV.

Wier said he hired a videographer to film the downtown area and conduct interviews with Billie Kaye Gavin Tygart of the Crescent City Downtown Divas and Kevin Hartwick, of Cholwell, Benz and Hartwick.

According to the city’s staff report, the estimated cost for the videographer is $2,000 to $3,000 with that money coming from Crescent City’s general fund.

Smith, who years ago started the Crescent City Cash Mob, which sought to support local businesses, said she, her mother and roughly 31 people met at Bellanotte restaurant to discuss submitting an application to HGTV. She said she and her mother contacted Wier to help with the videos and other materials the cable network needed.

Crescent City is a beautiful place, Smith noted, but it's a bit dilapidated. After living here for about seven years, Smith said, she has watched a few things decline.

But, people have a strong love for Crescent City, she said.

"We need to have a little bit more pride," Smith told the Outpost. "I want our town to have a shower, makeup and look nice so it can feel better."

“We spent a good chunk of the morning in the harbor area, down on the docks,” she said, adding that one of the fishing vessels was unloading its catch.

Wendt told commissioners that the Harbor District’s letter will be included among the application materials to HGTV. The deadline to submit the application is Friday, she said.

“If we are considered, HGTV knows we’re a community that works with partners and as a larger group of community members (want to) revitalize what we have,” Wendt said.

Speaking before the City Council, Wier noted that the Napiers are looking for communities with a “Main Street-type feel” and historic architecture. He said staff decided to support Makowskys’ efforts.

“When we looked at this we realized that Crescent City probably isn’t what Ben and Erin Napier are looking for,” Wier said, noting that the couple are based in rural Mississippi and adding that it seemed they were looking for Midwestern towns. “We have a unique story. We have a story about resiliency, about hope, about a community coming together the way we came together in 1964 as the only town to survive a tsunami that has come ashore.”

Wier also brought up Kamome and Crescent City and Del Norte County’s relationship to Rikuzentakata, Japan and local efforts to capitalize on an NBC Sports feature for the 2020 Olympics.

On Jan. 21, the City of Eureka announced that it will submit an application for Home Town Takeover.