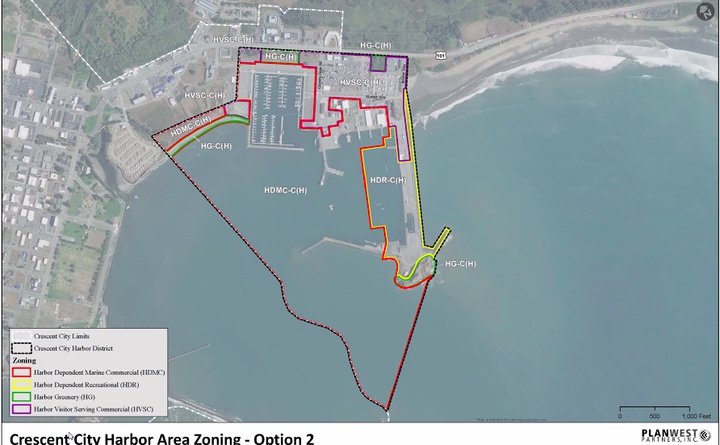 Though Crescent City harbor commissioners approved an updated Coastal Land-use Plan — a process that’s taken more than a decade to complete — one questioned whether the boundaries were drawn correctly.

Commissioner Wes White on Tuesday recused himself from discussing an option in the Crescent City Harbor District’s land use plan that removes its influence from property to the south of the port owned by his former employer, Hambro WSG. But when it came to the overall land-use plan,

Wes White said he was concerned that the boundary between the harbor’s land and that controlled by Crescent City is misrepresented.

Wes White said he wanted to get that “sorted out” before the Crescent City Harbor District submits its final land-use plan update to the Del Norte County Planning Commission, the Board of Supervisors and the California Coastal Commission.

While Crescent City Harbor Commissioners approved the land use plan, Carol White directed harbor district staff to continue to determine where the appropriate boundary lines are. She also asked that the plan be brought to the Board of Commissioners again for approval after the Board of Supervisors and Coastal Commission have weighed in on the document.

According to the updated plan, prepared for the Harbor District by Arcata-based PlanWest Partners in May, governments within the coastal zone must prepare a local coastal program under the California Coastal Act. This includes a coastal land-use plan, “which details the kinds, locations and intensity of land uses, and resource protections and development policies in the Coastal Zone.”

The land-use plan is a guide as commissioners consider current and future development at the harbor. The California Coastal Commission is required to approve the plan before it takes effect, according to the report.

PlanWest Partner Vanessa Blodgett, who worked with the Harbor District to update the land-use plan, told Wes White that she had recently become aware of the potential discrepancy regarding the boundaries the document depicts. Crescent City’s general plan and the county zoning map shows different city boundaries, she said.

“Something needs to be figured out, but in my opinion this can be brought forward to the county while those are being determined and before this is finalized,” Blodgett told harbor commissioners. “This isn’t finalized until it goes through the Planning Commission, the Board of Supervisors and is certified by the Coastal Commission and brought back to the Board of Supervisors for final approval. There are a number of steps before (the plan) is finalized.”

Blodgett said it would be up to the city and county to determine where the boundaries are and “come to an agreement.”

Harbormaster Charlie Helms said the differences between the city’s general plan and county zoning map aren’t great, though Harbor Commissioners could pay for a professional engineer to address the issue. But, he said, that would “stall the whole process.”

Carol White asked Blodgett if a survey would help solve the discrepancy.

Blodgett said she didn’t think that was necessary. That no one is questioning where the harbor district’s boundaries lie and it’s up to the county to implement the land-use plan.

“We definitely want to make sure before it’s certified and adopted, that the boundaries are correct and there’s agreement on that,” she said. “But this document is not setting or changing any city boundaries or county boundaries. It’s identifying a land-use planning area.”

Commissioners Rick Shepherd and James Ramsey noted that the land-use plan has to be approved for the Harbor Board to move forward on other projects.

Ramsey used a previous discussion about building a marine storage area in the harbor and using the roof for solar panels as an example.

“If we don’t pass the land-use plan, we probably can’t do that,” he said.

Ramsey also noted that any request for changes from the Del Norte County Planning Commission and California Coastal Commission need to be brought back before the harbor board.