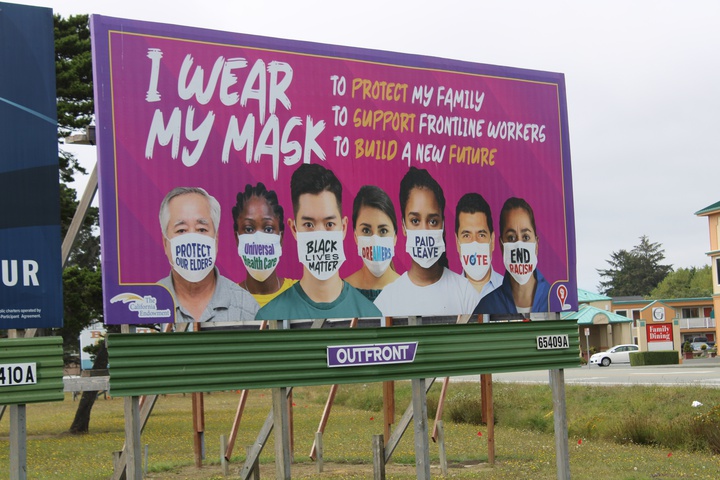 Complaints against a California Endowment billboard, including a threat of vandalism, has reached the Crescent City Harbor District Board of Commissioners.

Harbormaster Charlie Helms floated the idea of terminating the port’s lease with Outfront Media, which owns the billboard that carries the advertisement depicting people of color wearing masks to combat COVID-19. One of those masks proclaims “Black Lives Matter.” Another proclaims “End Racism.”

However, the Harbor District has no legal right to terminate the lease with Outfront Media, which grants the company space for five signs at $16,068 annually, Helms said.

Commissioner Rick Shepherd suggested speaking with Outfront Media, asking it to remove the California Endowment billboard. His colleagues rejected this idea, saying that it could be seen as an infringement on the Endowment’s right to freedom of speech and potentially open the harbor district to a lawsuit.

The Harbor District’s lease with Outfront Media began in June 2019 and lasts for five years. According to Helms’ staff report, beginning June 1, 2023, Outdoor Media will pay an annual rent of $17557.92 for space at the port.

Helms’ staff report also included the First Amendment right granting freedom of speech, which states “categories of speech that are given lesser or no protection by the First Amendment (and therefore may be restricted) include obscenity, fraud, child pornography, speech integral to illegal conduct, speech that incites imminent lawless action, speech that violates intellectual property law, true threats, and commercial speech such as advertising.”

“To me, we’re getting paid $16,000 a year for dirt,” Helms said, noting that the port doesn’t have any plans for the land the billboard sits on. “We don’t have to do anything in the way of maintenance of the signs. They don’t have anything up that is pornography or anything else. It’s good earnings for the Harbor District with very little time invested.”

The two billboards have sparked several complaints, including one from District 1 Supervisor Roger Gitlin. Gitlin voiced his displeasure on Facebook on July 25, pointing out that the billboard was missing “any reference to European-American inclusion.”

“The face declaring the ending of racism only underscores the racist mindset of the California Endowment,” Gitlin wrote. “The inclusion of the clinched fist sends a terrible message to our community. Tragic!”

The California Endowment is a private health foundation created in 1996 when Blue Cross of California acquired WellPoint Health Networks. The Endowment has more than $3 billion in assets and has funded the $1 billion Building Healthy Communities initiative, which has invested in 14 California communities including Del Norte County.

Building Healthy Communities has been involved in candidate forums, literacy symposiums and has supported organizations like First 5 Del Norte and the Community Food Council.

On Tuesday, harbor commissioner Carol White said what stood out to her about the restrictions on free speech listed in Helms’ report was the “incites imminent lawless action component.”

“There have been people threatening to get out there and spray paint (the billboard),” she said. “It didn’t just tick off one group of people. There’s quite a few different organizations that are not happy about it being up there.”

Carol White said she has been directing her constituents to Outfront Media and, when she found out who paid for the ad, to the California Endowment.

Shepherd said the port’s first course of action could be to ask Outfront Media to remove the billboard, though he said he didn’t want to terminate the harbor’s lease with the company.

Along with Wes White, commissioners Brian Stone and Jim Ramsey favored taking no action with regard to the billboard.
Doing so could lead the harbor down a “slippery slope,” Stone said.

“We have been accused in the past by the public of doing things which were not in the best interest of the harbor — basically mismanaging the harbor,” he said. “For us to try to terminate this lease at this point in time would, One, open ourselves up to the possibility of liability over freedom of speech. And, two, breaking a lease without having a reason.”

Ramsey said he didn’t see the billboard as political. He pointed out that the California Endowment paid money for the advertisement, and he didn’t want to give up the revenue the port receives in lease payments from Outfront Media.

Ramsey said no one has complained to him about the sign and if someone has threatened to spray paint it, “hopefully the sheriff will catch them.”

“That’s also a situation of being intimidated by whatever group is upset with this and that’s not the way this should be,” he said. “I’m not personally happy with driving around this county and finding signs for a certain candidate, or flags for a certain candidate blowing all over on the ends of the street when it’s not supposed to be out until 45 days before the election. But, you know, it’s not worth the hassle for me.”