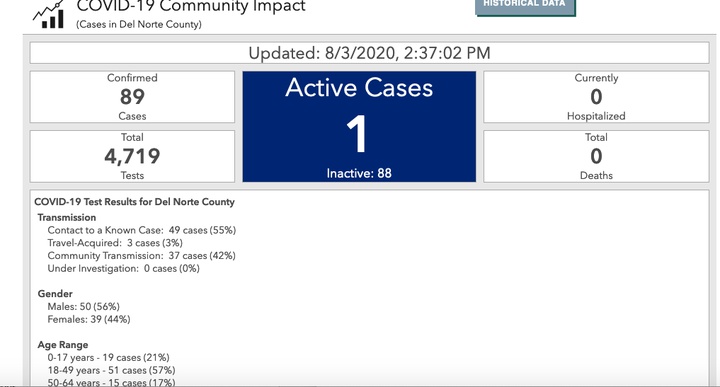 The Del Norte Public Health Branch also reported Friday that the number of people tested has increased due to ongoing surveillance screening among Pelican Bay State Prison inmates. A total of 4,719 tests have been administered in Del Norte County as of Monday.
None of the inmates have tested positive, according to Del Norte Emergency Services Manager Kymmie Scott, who said she gets a daily update from prison officials.

“They are saying that none of the inmates are testing positive,” Scott told the Wild Rivers Outpost. “I’ll caveat that with the labs that CDCR is using has not input any data into the state tracking system yet and so, right now, the results that we’ve received are just verbal confirmation from the prison.”

According to the Public Health Branch’s latest report, the patient identified on Monday is isolating at home. Staff have identified their close contacts who are also quarantining.

Meanwhile, the California Department of Corrections and Rehabilitation continues to report zero COVID-19 cases among Pelican Bay State Prison inmates, according to its COVID-19 Tracking tool.

Among Pelican Bay State Prison staff, of 26 cumulative confirmed cases, 18 have returned to work as of Friday, according to CDCR’s COVID-19 employee web page.

According to Scott, citing her daily update from the prison Monday, there have been no new cases. Pelican Bay staff and inmates were tested for COVID-19 last week after previous testing resulted in a total of 23 positives, most of which were asymptomatic.

Some of the prison staff who tested positive live in Curry County. Five active COVID-19 cases were identified in Curry County as of Monday. Nine cases have recovered, according to Curry County Office of Emergency Management.

Meanwhile, test results from the latest BioBot sampling is expected to be posted on the Public Health Branch’s COVID-19 information hub on Monday. According to Scott, while this recent report shows a slight increase in viral evidence from the previous report July 12, it’s not significant.

Del Norte County has had a total of 89 confirmed COVID-19 cases. Of those cases, 44, or about 50 percent, were asymptomatic, according to the Public Health Branch.