Today, a California-based coalition of tribes, two federally recognized Indian tribes, a foster youth and foster care alumni group, and three organizations that work with LGBTQ+ and two-spirit youth in foster care sued the Department of Health and Human Services (HHS) and the Administration for Children and Families (ACF).

The coalition of groups sued HHS and ACF for unlawfully rescinding requirements that child welfare agencies report data about the tribal membership and affiliation of foster children, voluntarily disclosed data about the sexual orientation of foster youth and foster and adoptive parents, and data about how agencies identify and serve American Indian children and LGBTQ+ youth in the foster care system. 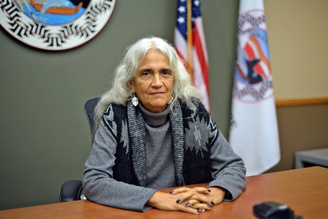 “The Yurok Tribe and Tribes across the country are working to improve outcomes for our children in the foster care system. The collection and analysis of detailed data is critical to the success of this undertaking, which seeks to serve some of the most vulnerable citizens in the United States. Instead of rolling back protections for Native and LGBTQ+ children in foster care, the federal government should actively support this effort to ensure that these acutely at-risk adolescents have a positive future,” said Abby Abinanti, the Chief Justice of the Yurok Tribal Court.

The plaintiffs are represented by Democracy Forward, Lambda Legal, and the Michigan State University College of Law’s Indian Law Clinic.

For quotes from each of the plaintiffs and more about their work to protect foster youth, click here.

In May 2020, the Trump administration announced it would eliminate requirements that child welfare agencies report data on American Indian children and LGBTQ+ youth and their families. In doing so, the administration upended more than a decade of work, including thousands of interviews with stakeholders and multiple comment periods — which helped secure overwhelming support for the 2016 rule that established the requirements.

In rescinding much of the 2016 rule, ACF violated the Administrative Procedure Act in multiple ways. The agency:

American Indian and Alaska Native children and LGBTQ+ youth are overrepresented in U.S. foster care, which sees nearly 500,000 children — who overwhelmingly hail from marginalized populations, low-income families, and communities of color due to systemic inequities — placed in out-of-home care every year. These vulnerable populations have unique needs, yet suffer negative treatment and outcomes — including separation from their culture, homelessness, abuse, sex trafficking, involvement in the criminal justice system and more — at a far higher rate than other children and youth in foster care. The Indian Child Welfare Act (ICWA) requires that American Indian foster children be placed with relatives or tribal members where possible. Despite this requirement, child welfare agencies too often remove American Indian children from their tribal communities and ignore the roles and rights of tribes to participate in the foster care process.

Congress requires ACF to collect and maintain information about the demographics and status of America’s child welfare programs. The Adoption and Foster Care Analysis and Reporting System (AFCARS) maintains data about the safety, health, and long-term outcomes of children and youth in out-of-home care. In 2016, ACF updated the AFCARS system with a new rule to fully capture the demographic characteristics and experiences of Indian tribes, American Indian children, and LGBTQ+ youth in foster care. The 2016 rule mandated reporting of how child welfare agencies track American Indian children and included ICWA-related data. It also mandated reporting of the voluntary disclosure of the sexual orientation of foster youth aged 14 and older, and of foster and adoptive parents and legal guardians.

The data would help ACF, child welfare agencies, and organizations serving foster children and youth identify and understand the most critical challenges facing the foster care system, would help direct resources more effectively, and would reduce the frequency of bad outcomes for children and youth.

Without the data, the entities that assist these at-risk populations are left guessing on matters of critical importance. Organizations providing services to LGBTQ+ youth cannot, for example, determine whether they are reaching the full population of LGBTQ+ youth in the child welfare system, address their over-representation in foster care, determine if they face increased risk of trafficking, or track outcomes by race.

The following plaintiffs make up the coalition suing ACF for its unlawful changes:

The suit was filed on August 27 in the U.S. District Court for the Northern District of California. Read it in full here.

Read the complaint in full here.

Read more about the case here.