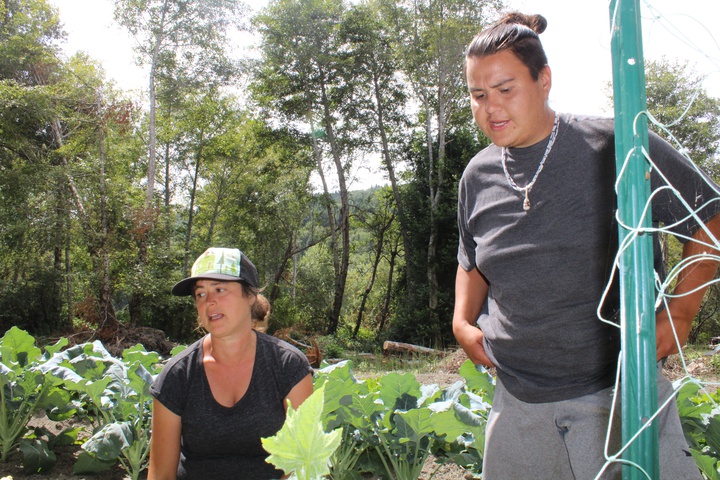 The Ancestral Guard’s answer to food insecurity, sandwiched between Klamath Glen’s airstrip and the river, is already producing.

Beets, lettuces, spinach and Swiss chard are ready for harvest. Pumpkins are already turning orange. Beans and peas climb a trellis made of old gill net.

Peter, Sammy and Jon Luke Gensaw are fishermen, not farmers, but in four short months, the brothers have turned an area thick with red alder, nettle and native raspberry into the Ancestral Guard Victorious Garden.

“Sammy talks about people saying Klamath is a food desert,” Peter Gensaw told the Wild Rivers Outpost on Tuesday after accepting a delivery of lettuce starts from Elkhorn Herbals Plant Nursery owner Andrea Lanctot. “We wanted to challenge that narrative.”

The Yurok youth-led nonprofit organization is using a $30,000 grant from the First Nations Development Institute to realize an initiative that includes installing planter boxes at the homes of 15-20 families in the Klamath and Crescent City areas, Sammy Gensaw III told the Outpost.

Ancestral Guard members will visit on a weekly basis to help the families care for their gardens, making sure the vegetables are healthy. Produce from the big garden will supplement their needs during the winter, Sammy Gensaw said.

According to Sammy Gensaw, this is the third of a three-part initiative that also includes providing traditional redwood stools, indigenous learning materials and “cultural consultancy” via Zoom for families.

Ancestral Guard members will also take families on outings to collect and harvest their own food and provide a traditional meal once a week that includes vegetables from the organization’s garden, Sammy Gensaw said. He said he and his brothers came up with this initiative after interviewing local households.

“A lot of people had fond memories when they were children doing gardens and there’s a whole generation of kids growing up without that experience,” Sammy Gensaw said. “How do we get that experience back into households?”

Sammy Gensaw and his brothers founded the Ancestral Guard as a way to get youth engaged in the decision-making process that affects the Klamath River. They’ve attended protests in opposition to a liquified natural gas pipeline that was supposed to cross the river. Their members have also participated in three Rio to Rivers international exchanges, which has taken them to Chile to learn about how hydroelectric dams affect watersheds and indigenous communities there.

Last year, Peter and Sammy Gensaw and other Yurok Tribal representatives welcomed activists from seven different watersheds to the mouth of the Klamath River.

According to Sammy Gensaw, he and other Ancestral Guard members also wanted to change their community’s struggles with food insecurity, working with the University of California, Berkeley to study local food systems.

Installing garden boxes for local families is a way of reinvesting the grant dollars the organization has obtained and enabling households to take care of themselves, Gensaw said.

“I believe our people just need access to healthy opportunities,” he said. “Our families are so resilient and strong, we just need the opportunity.”

Ancestral Guard members will bring the unit to people’s houses and at fishing spots and eeling camps to help process everyone’s food, making it freezer-ready for the winter. He said the mobile butcher unit will be operational by Sept. 1, in time for salmon season.

The Ancestral Guard also uses a mobile commercial kitchen for processing vegetables and is in the process of purchasing property in Klamath Glen that will house smokehouses, a place to process animals and a wood shack.

“We have a five-year plan to battle the food desert narrative in our community,” Sammy Gensaw said. “We believe we can reverse the whole narrative. Five years from now, we won’t qualify to be a food desert.”

In the spring, the Gensaws reached out to Lanctot, who also works for the Community Food Council of Del Norte and Adjacent Tribal Lands and is part of the Wild Rivers Permaculture Guild. The area was still wooded when she met with them the first time, but within a month they had cleared it.

Despite their novice status as gardeners, Lanctot was impressed with the work the Gensaws had done.

“Your garden looks better than mine,” Lanctot told him.

Peter Gensaw said it takes about 30-40 minutes to fill up the water tanks. This, he said, is probably the one thing he doesn’t like about the Victorious Garden.

“We’re getting our hands dirty in farming,” he said. “All of us boys liked it after awhile.”