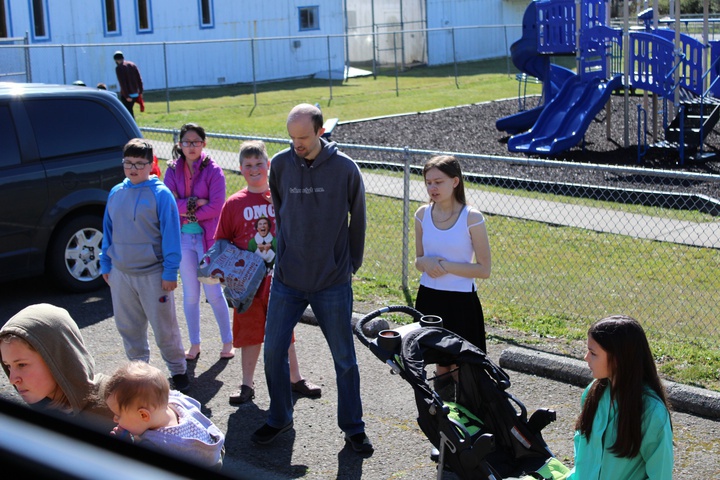 Students and parents line up at Lighthouse Community Church on March 19 to receive meals and work packets from district staff. Photo: Jessica Cejnar

With students fed and their minds occupied, Del Norte Unified School District will tackle the issue of grades and course progression during a pandemic.

Following spring break, which starts Monday and ends on April 19, teachers will be grading assignments, DNUSD Superintendent Jeff Harris told the Wild Rivers Outpost on Monday. That issue will come before the Board of Trustees on Thursday.

DNUSD closed its campuses on March 16 as a result of the COVID-19 pandemic. The plan at that point was to reopen school when students returned from Spring Break on April 20.

But on March 31, State Superintendent Tony Thurmond noted that due to the ongoing need for social distancing kids likely won’t be able to return to campuses before the end of the 2019-2020 school year.

“In order to allow schools to plan accordingly, and to ensure that learning still occurs until the end of the school year, we are suggesting that schools plan and prepare to have their curriculum carried out through a distance learning model,” Thurmond said in a written statement on March 31.

“This is in no way to suggest that school is over for the year, but rather we should put all efforts into strengthening our delivery of education through distance learning.”

The first week school was closed in Del Norte, teachers and staff distributed grade-level work packets to families along with breakfasts and lunches starting March 19. However, Harris said, on March 24 things began to shift.

At Del Norte High School, teachers were developing packets tailored to the specific classes students were taking, Harris said. By March 30, teachers at the elementary school level were creating lessons, using Google Classroom and Zoom to interact with their students, he said, though they weren’t doing any grading.

On April 20, however, that will change, Harris said.

“We are going to be requiring that all students engage with their teacher to whatever level their teachers are requiring,” he said, “as they prepare for a full online launch on the 27th.”

By the time students go on Spring Break, each one will have a computer to use, Harris said. Though most teachers are proficient at Google Classroom and another learning management system called SeeSaw, teachers are expected to receive more intensive distance learning training the week following Spring Break, he said.

However, there’s still the question of students who may not have Internet access, though Harris said between 90 and 95 percent are able to connect with school digitally.

Each year, the district conducts a survey to determine how many of its students are able to access the Internet, Harris said. However last year only 1,100 of its 3,600 students responded, he said. He also noted that 10 percent out of 3,600 who don’t have Internet access is 360 students.

“We have our clerical staff making phone calls, asking a broad number of contact questions, but also completing the Internet survey,” Harris said. “Our special education staff is also in contact with students to find out who does and does not have access as part of their program of reaching out and providing services.”

District staff have discussed how to help kids access the Internet so they can complete their work, Harris said. Some options include having a child come to a location that has Internet access, download the material they need to work from home and return it to the teacher.

Another option may also be enabling the child to reach out to their teacher via phone, Harris said.

There’s also the question of the overall disruption to the school year the COVID-19 pandemic has caused. Teachers will normally spend the first few weeks of the school year reviewing material from the previous year, Harris noted. Next fall, the district may implement intervention classes, he said.

“The worst case scenario could be we actually spend the beginning of next year and instead of those lessons being review, they could end up being teaching lessons where we’re actually teaching content from the last few weeks that we weren’t able to teach,” he said. “I think that’s probably what many of our people are planning for.”

Harris said his staff have also discussed what happens when the COVID-19 pandemic is over and social distancing requirements have relaxed. Will distance learning be a viable long-term option for students?

“Might it be a district charter school or even a regular district school that offers that sort of education?” Harris asked. “I think there are some interesting conversations as we continue to go through the next nine weeks and into the summer. Especially if for some reason we are not allowed to re-start school at the beginning of next year.”

To participate in the meeting via Zoom, visit https://dncoe.zoom.us/j/193445536. To view meeting agendas, click here.