For Redwood Coast Transit, Operating Through COVID-19 Has Been a Roller Coaster » 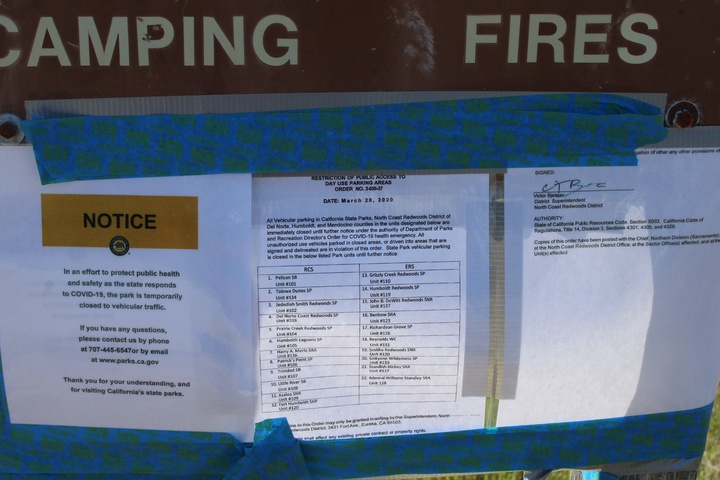 A notice at Tolowa Dunes State Parks on Sunday informs people that vehicular access is prohibited due to the COVID-19 pandemic. Photo: Jessica Cejnar

(The story has been updated at 8:05 a.m. Friday to correct the photo caption below. Caltrans did not erect the electronic signs on U.S. 199.)

A local fishing guide has raised concerns about locked gates erected at different points in local state parks since the COVID-19 shut down order was issued last month.

Mike Coopman, owner of Mike Coopman’s Guide Service, says he has noticed the gates at access sites along the Smith River such as Peacock Bar and Brundeen Hole about 10 days ago. California State Parks erected those gates without public notice, environmental review process or contact with the Del Norte County Board of Supervisors, Coopman told the Wild Rivers Outpost on Wednesday.

Noting that most of the land in Del Norte County is made up of state and federal public lands, Coopman said the gates keep, not only non-locals, but local anglers from accessing the river.

“My main concern is in Del Norte County, we’re 85 percent owned by the state or federal government and over the years we’ve had access taken away,” he said, adding that he’s unable to take clients fishing due to social distancing requirements. “It’s proof-positive that when they put gates up they use them. They don’t just sit there, they use them, and I don’t think we should be restricted (from) public lands.”

The gates at Redwoods National and State Parks are meant to deter vehicles and reduce vandalism, California State Parks Information Officer Adeline Yee told the Outpost via email on Wednesday. The department received a waiver from coastal development permit requirements from the California Coastal Commission’s executive officer in response to the COVID-19 pandemic, she said.

Installation of the gates is in compliance with the California Coastal Act, Yee said. 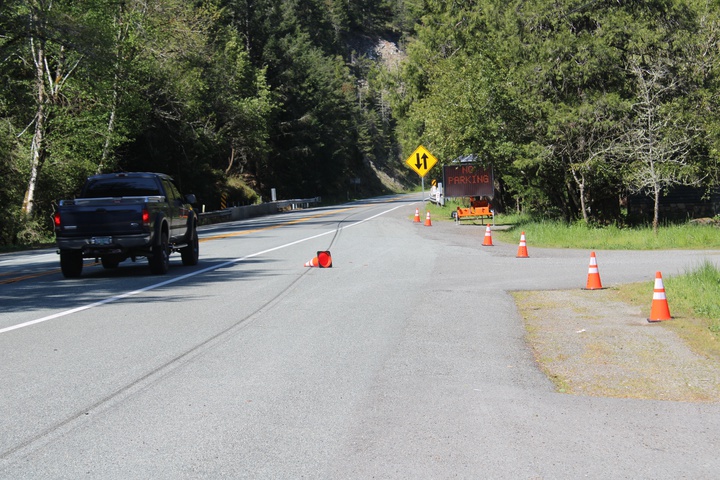 “Many state parks continue to experience visitation surges that make it impossible for the public to implement safe physical distancing,” Yee said. “The State of California understands the public’s need to connect with the outdoors, but protecting all Californians from the exposure to the pandemic disease is critical.”

California State Parks has closed all 280 units to vehicles, boats and off-highway vehicles as of March 29, Yee said. Some parks have shuttered entirely, barring people from camping, hiking, biking, fishing and engaging in other recreational activities. But, Yee said, Del Norte’s parks and beaches are experiencing “soft closures” since pedestrians are still allowed.

Yee said State Park peace officers can issue citations if they think it’s necessary. Rangers are also educating the public on the importance of maintaining a distance from others, not congregating at parks and leaving if they can’t maintain social distancing, she said.

Decisions to reopen parks will be made in conjunction with state and local public health officials, Governor Gavin Newsom’s office and the California Office of Emergency Services, Yee said.

Referencing the soft closures, Del Norte County District 3 Supervisor Chris Howard brought Coopman’s concerns to other county supervisors on Tuesday. He said he wanted to move forward with a “game plan” with State Parks to allow local control over access.

“There’s a great deal of concern about this because the permanent gates send a poor message to this community,” Howard told his colleagues. “We pretty much curtailed the movement of transients into the community, so the community needs to use these areas.”

According to Howard, the permanent gates had replaced temporary barriers State Parks had borrowed from Del Norte County, some of which had been vandalized. “One bad apple spoiled it for the bunch,” he said, and permanent structures were put in at roughly five sites.

Howard said he was concerned that the gates and barriers prompt people to congregate at trailheads instead of dispersing into the parks. He said his goal is to work with local state park officials, North Coast District Superintendent Victor Bjelajac and Supervising Ranger Brett Silver, to come up with a compromise that would allow local access while discouraging non-locals from gathering.

“I think putting in a permanent gate, even if that gate is left open after the pandemic runs its course sends a very bad message to our community who has dealt with a legacy of closures on public land for decade after decade,” Howard told the Outpost, pointing to Public Health Officer Dr. Warren Rehwaldt’s March 27 order barring short-term stays at local hotels, motels, vacation rentals and other lodging facilities.

“Now that we have very limited transient movement into our community — it’s almost nonexistent right now — (we can) allow our state parks to be open for our people.”

Coopman said he was booked solid through March 31 and had the potential of making an estimated $3,500 a week in hosting visiting anglers. He said he would have been able to fish until the end of April, but shut down 10 weeks ago due to the COVID-19 response.

Coopman said he’s also unable to put in at the boat launch near the confluence of the Smith River’s south and middle forks on the Six Rivers National Forest. The U.S. Forest Service isn’t adding locked gates there, he said, but they have pulled all commercial use fishing permits.

Coopman said he was alarmed when he saw the gates State Parks put up. Del Norte anglers are used to fishing the river whenever they want, Coopman said, though he gave 6 a.m. as an arbitrary time. Now, he said, they’ll have to wait until someone opens a gate.

“Instead of just being able to go fishing, it’s going to be another deterrent,” Coopman said. “With what the sport fishing industry brings to Del Norte County, this could be a huge loss and the way the park handled this so far, doing it under cover rather than being informative and being upfront… it seems pretty shady the way it’s been handled.”

Del Norte’s two positive COVID-19 patients have recovered, the county Public Health Branch announced Tuesday. A total of 202 tests have been administered as of 8:27 a.m. Thursday. The results for 199 tests are negative and one result is pending, the Public Health Branch reports.

For more information to State Parks closures and its response to the pandemic, click here.