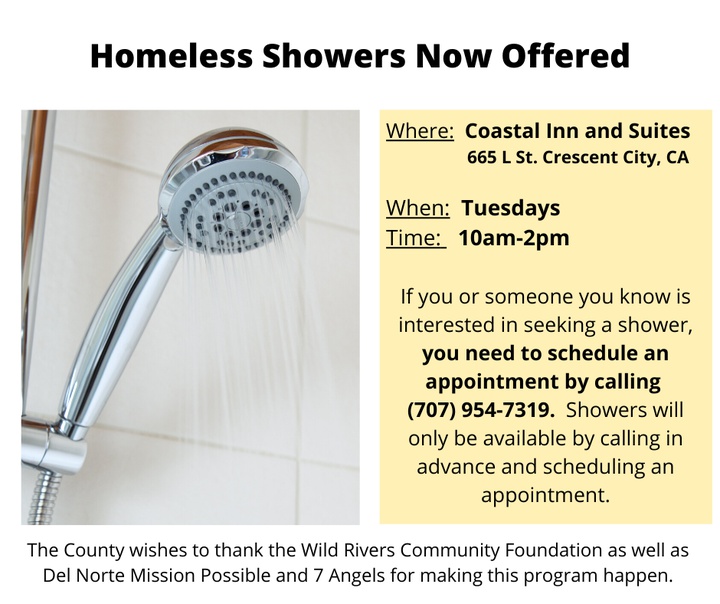 Del Norte Mission Possible has partnered with Seven Angels Last Stop Services and Coastal Inn and Suites to offer showers to those needing them.

“There has been a lot of meetings of the Homeless Housing Advisory Group addressing the need for showers,” Lambert said, adding that the first day of this program has been successful. “And working with the city and county, they were able to come up with an idea where Wild Rivers (Community Foundation) was going to donate the money for two motel rooms.”

Del Norte Mission Possible is using about $5,000 in grant dollars from the COVID-19 Response Fund set up by WRCF and the Humboldt Area Foundation to provide showers to the community.
Del Norte Mission Possible also received a $10,000 grant from the two foundations’ COVID-19 Response to address the need for increased services and management support during the pandemic.

Access to restrooms and showers were two pressing needs for the unsheltered population, Del Norte Emergency Services Manager Kymmie Scott told the Outpost on Friday. She said it was part of the mass care and shelter needs members of the Emergency Operations Center and other partners were trying to address as part of the COVID-19 response.

However, District 2 Supervisor Lori Cowan, has been working with Lambert, United Methodist Church Pastor Dana Gill Port and members of the Homeless Housing Advisory Group for the better part of a year to set up a mobile shower program.

For the past three weeks, Cowan said, she, Lambert, Gill Port and Del Norte Department of Health and Human Services Director Heather Snow have discussed the need for showers during the pandemic. Under normal circumstances, showers have been offered at St. Vincent de Paul, Cowan said, but when churches had to close due to social distancing recommendations, there was discussions about what facilities would be available.

“We went to the city with the pool, but we ended up shifting directions and going with the hotel,” Cowan said. “Everybody’s kind of helping out. The county set up the contract and is taking care of that. Our maintenance (staff) is making sure they have cleaning supplies to do it and Daphne is getting volunteers. A little bit of everybody is coming into play.”

“Everybody has a 15 minute period and if the need is more than that we will extend the time and adjust,” she said. “It’s such an honor and a privilege to be able to meet this need.”

Cowan said she doesn’t know how the topic of showers came up in connection with COVID-19, but said she, Lambert, Snow and Tamera Leighton, who’s on the Del Norte Mission Possible Board of Directors, began discussing what’s needed with Gill Port.

This example of community collaboration and partnership, along with multiple volunteers creating masks, going shopping for others and choosing to support local businesses, is what will get Del Norte County through the emergency, Cowan said.

“The phone calls are daily,” she said. “People asking questions or concerns — making sure they pass along correct information. Or (asking) how can they help; or, ‘I can do this,’ or, ‘Do you need this?’ That’s what it’s been like the last three weeks, which I think is fabulous.”

In Del Norte County, there have been two confirmed cases of COVID-19. A total of 185 tests have been administered as of 8:26 a.m. Tuesday, according to the Public Health Branch. The results for one test is pending and 182 possible cases have tested negative.