Local Hemp Grower Will Introduce His Product To Del Norters At Live From Downtown: It's First Friday! 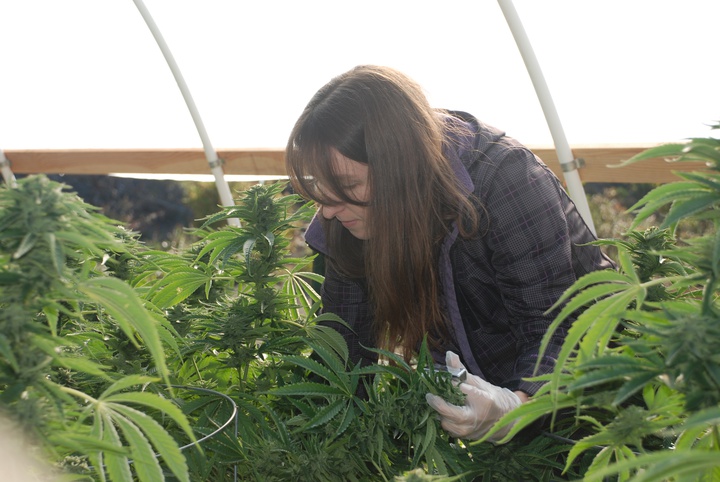 High up Low Divide Road, Chelsea Grochowski and David Cavyell inspected the sword-shaped leaves and green flower spikes of Jesse Davis’s hemp crop on a sunny Halloween morning. Then, snapping on a pair of latex gloves, Grochowski snipped roughly 10 branches depositing them into the brown paper bags Cavyell held open for her.

Davis, owner of Del Norte Sol, said his plants will be sent to Humboldt Quality Assurance Laboratory in Arcata for testing. The tests will determine the ratio of THC — the intoxicative substance in cannabis — to cannabidiol, or CBD, Davis told the Wild Rivers Outpost on Thursday.

Davis will be selling whole raw hemp flowers for $10 each at Live From Downtown: It’s First Friday! in Downtown Crescent City on Friday.

“It should be fun and interesting to see how people respond,” Davis told the Outpost via email.

Davis, who lives in McKinleyville outside the growing and harvesting season, has been cultivating hemp on a tenth of an acre in Del Norte for about three years. He has roughly 98 plants, most of which were sampled in September and tested in October. On Thursday, Grochowski and Cavyell were sampling from a garden of 28 hemp plants.

Though they’re the same species, hemp is a strain of cannabis that has a lower concentration of THC. According to Davis, the plant’s THC content has to be less than 0.3 percent to be considered hemp.

The plants Grochowski gathered from Davis’s farm in September had a TCH content of 0.112 percent, according to the test results. Their CBD content was 2.48 percent, according to the test results.
Industrial hemp has a variety of uses from food to fiber for clothing to building materials, but, Davis said most small growers cultivate it for the CBD content.

“On a small scale it’s the only way to make it pay,” he said, though he saves the seeds for propagation. “Massage oil and salve cream is the product we make.” 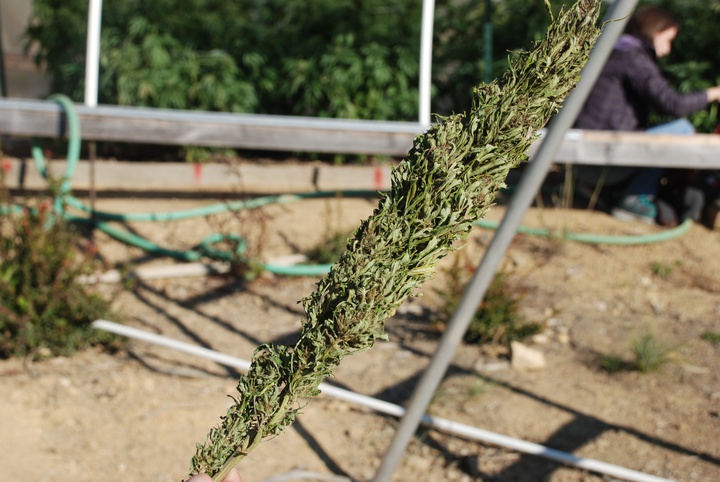 Jesse Davis, owner of Del Norte Sol, provides a close-up of a hemp flower on Thursday. Davis will be selling flowers on Friday at Live From Downtown in Crescent City. Photo: Jessica Cejnar

Hemp became legal to grow in the United States following the passage of the 2018 Farm Bill. This made hemp growers eligible for farm loans, required them to become licensed to produce hemp and file reports on what the crop would be used for as well as an acreage report, according to the U.S. Department of Agriculture.

Davis said he views hemp as a pilot project in Del Norte County and the State of California. But, he said, it could one day be a significant job producer for the area.

In addition to harvesting the crops, skilled people will be needed to irrigate the plants and propagate the seedlings, Davis said. Much of the drying takes place indoors and then it’s processed into something that can be sold, he said.

“It’s another industry,” he said. “It’s a labor-intensive industry with prices and demand built into that. But it’ll employ quite a lot of people.”

Davis on the Cannabis Working Group, a committee of stakeholders established by the county to develop zoning areas and ordinances related to the manufacturing and sale of cannabis fo recreation purposes.

At a Sept. 10 meeting of the Board of Supervisors, though elected officials were considering expanding the Cannabis Combining District to include places outside the unincorporated area of Crescent City, Davis introduced himself as a hemp grower.

Davis told supervisors to be prepared for federal guidelines regarding the hemp industry and said the state is working to make its regulates coincide with those mandated by the USDA. Davis said he anticipated a boost in local hemp growers and said the Del Norte Agriculture Department wasn’t currently staffed to handle that boost.

“We need to pay attention so we don’t get caught unprepared,” he said.

At the Board’s Sept. 10 meeting, District 3 Supervisor Chris Howard said he wanted his colleagues to take the emerging hemp industry into consideration when delving into the potential of expanding the Cannabis Combining District.

“I don’t think this item is broad enough to address a hemp issue, but it does need to be addressed,” Howard told Deputy County Counsel Joel Campbell Blair on Sept. 10. “I’d hate to see county counsel review an ordinance around retail manufacturing without taking a look at hemp, but maybe on a later agenda.”

On Oct. 22, though the Board of Supervisors authorized staff to begin expand the Cannabis Combining District to include Smith River, both inside and outside the coastal zone, hemp wasn’t brought up.

Live From Downtown: It’s First Friday! will be held from 5 p.m.-7:30 p.m. Friday in downtown Crescent City. In addition to raw hemp flowers, there will be local artisans, food and live music.