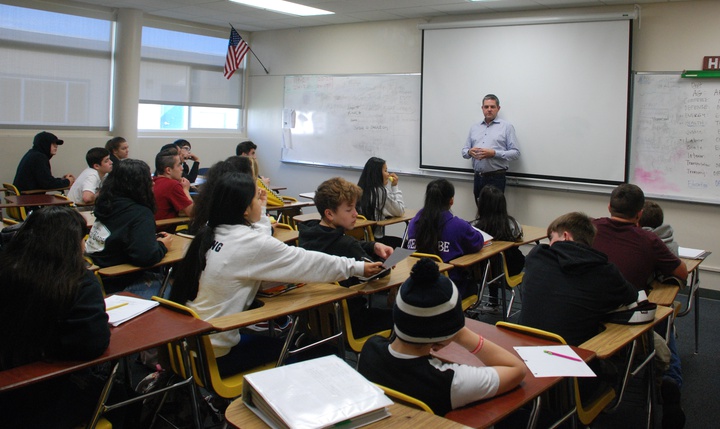 Before regaling high schoolers on the exploits of forensic dentistry, Assemblyman Jim Wood talked healthcare, wildfires and homelessness with the Del Norte County Board of Supervisors on Tuesday.

“I know you’re well aware of the desire to better understand what community benefits Del Norte County is receiving from your local hospital — I should say, nonprofit hospital, Sutter Coast Hospital,” Wood said. “Although these hospitals do report community benefits, larger hospital systems do so in aggregate and that leaves especially smaller rural areas without information about what’s happening in their communities.”

Introduced nearly a year ago, AB 204 requires the Office of Statewide Health Planning and Development to prepare a report on community benefits annually and post it and community benefit plans hospitals submit on its website. The bill also authorizes OSHPD to fine hospitals up to $5,000 if they fail to update their plans, Wood told supervisors.

Under Wood’s bill, community benefits, also known as charity care, does not include items such as t-shirts that are used to market a nonprofit hospital. According to the assemblyman, the California Hospital Association initially opposed AB 204, but then took a neutral position. Wood said the association was initially worried about what “we might do” with the information the bill would provide.

“Transparency is a valuable tool and it very often changes behaviors,” Wood told supervisors. “You’re going to now know what this nonprofit hospital does for this community. That’s an important part of their responsibility as a hospital, but also (due to) the tax exempt status they receive.”

In the past legislative session, Wood authored 22 bills, of which 14 were either signed into law or were implemented through the budget or another legislative action. The governor vetoed two bills Wood authored and others, he said, he will continue to work on in 2020.

Wood said he continues to focus on containing healthcare costs, which have been rising at twice the level of inflation. Inflation has hovered around 3 percent in the last several years while medical costs have increased about 5-6 percent annually, Wood said.
This year, Wood said he joined California Attorney General Xavier

Becerra to prevent pharmaceutical companies from delaying lower cost generic-brand drugs from getting ot the market. Wood said he and Becerra are continuing to address “monopolistic” dialysis companies like DaVita urging patients to join the commercial insurance program, the American Kidney Fund.

He said the neediest of patients are eligible for MediCal and other forms of assistance, and while giving to the American Kidney Fund sounds charitable, they receive reimbursement rates up to four to five times MediCare’s reimbursement rate.

“If you control 80 percent of the market, there’ sa good chance you get a windfall of money; sometimes at a rate of $4 to $5 on the dollar,” Wood said.

Wood said he has also addressed the opioid crisis by advocating for a law that requires doctors to submit prescriptions to pharmacies electronically by 2021. This, he said, would reduce paper-based fraud and forgeries and make sure people are not doctor shopping.

Wood said another law he’s working on requires medical professionals prescribing high doses of opioids to co-prescribe Naloxone, the drug that reduces the effects of an overdose.

When the discussion turned to wildfires, Wood said last year he introduced AB 38, which is designed to create more resilient homes and communities.

He noted that many of the homes that survived last year’s Camp Fire that devastated Paradise were constructed after building codes were updated in 2008. AB 38 creates a pilot program that helps homeowners and communities manage vegetation, Wood said.

“We’re also, through a collaborative process of state and local departments and agencies determining what standards we should be using for creating this resiliency going forward based on information and research,” he said. “That bill was signed by the governor early in October.”

When Wood concluded his presentation, county supervisors praised his advocacy and support of his district’s rural communities. District 5 Supervisor Bob Berkowitz commended Wood for authoring AB 824, a prescription drug price bill that reduces rates by “hundreds of millions of dollars a year.”

“Here in Del Norte County we can expect lower-priced generics to come to the market sooner, easing the burden for seniors and other people who desperately need medications to survive,” Berkowitz said.

Howard, who, along with Cowan, Duncan and Inscore, brought the issue of community benefits as it relates to Sutter Coast Hospital to Wood’s attention last year, said he was impressed that the assemblyman was able to turn a local into issue into a broader one.

“Obviously, we didn’t get everything we wanted in the legislation. More specifically it’s a base line to hold them to a standard across the board,” Howard said. “If amendments in the future can help adjust that so we have something to compare (Sutter Coast Hospital) to, maybe Oregon or further south of us, that would be helpful.”

At that point, Wood turned the discussion to homelessness, saying that in nearly every community he represents it’s one of the top issues they face and it affects each one differently. He spoke of 66 apartments constructed in Windsor for homeless veterans, saying it will be successful because it includes substance abuse and behavioral health services.

Wood said a bill the assembly is working on for next year will expand the scope of practices for nurse practitioners that may be able to assist in providing substance abuse and behavioral health services.

“In our rural communities, between 2008 and 2015, the number of primary care providers dropped by 10 percent in California at a time when the population grew by 2.5 million,” he said. “More doctors isn’t going to solve the problem completely. It’s important, but we need to look at all of our other providers.”

Before leaving the community, Wood dropped by Anthony Grosso’s Health Foundations class at Del Norte High School. He gave students a history of his career as a dentist, but told them not to discount a career as a healthcare technician, such as sonogram technicians and laboratory technicians, which could allow them to get a job closer to home.

“These are the kinds of jobs they’re not going away, because people are not going to be in perfect health,” Wood told students. “Even when the economy isn’t great, you still need people in the medical fields, so these are great jobs, and you have a skill that’s portable that you can take with you somewhere else.”