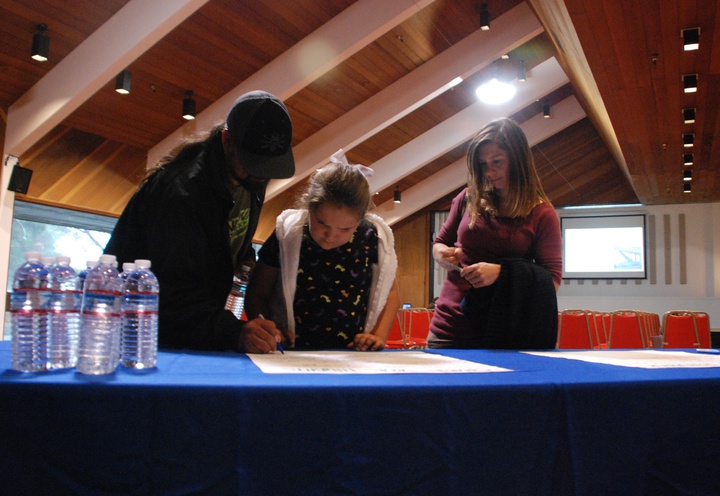 A pump track, amphitheater, labyrinth and disc golf were among the most popular attractions Del Norters want to see added to Beachfront Park.

At a second set of public meetings Monday, city staff asked residents to narrow down their choices for projects that could be funded through a non-competitive $200,000 Proposition 68 grant. Staff and community groups advocating for specific amenities gave a breakdown of the amount of money needed to build them.

But Crescent City Recreation Director Holly Wendt said though the grant dollars the city is pursuing can be used for one project or a combination of projects, it doesn’t include staffing or maintaining them once they’re built. She said she hopes people think about what it will take to maintain a labyrinth or a pump track or the other amenities being proposed for the park.

“Del Norte County needs to build a sense of community,” Wendt told the Wild Rivers Outpost. “I want things we’re going to be able to partner with the community on. I’m looking forward to working with these amazing people and supporting them supporting us.”

In addition to sustainability, including whether the project selected will bring additional tourism dollars to Crescent City, Wendt also asked people to think big picture. Communities can apply for up to $8.5 million in competitive Proposition 68 dollars, she said. Large municipalities will be going after those dollars, Wendt told WRO. There is also $23,125,000 available to rural communities statewide for park projects, according to Wendt.

Wendt said the Crescent City Council will weigh in on a resolution focusing on the $200,000 Proposition 68 grant at its Nov. 4 meeting. She’ll also meet with groups advocating for adding a pump track, labyrinth or putting more money into the existing disc golf course before coming back to the City Council in December with a finalized grant application.

The amphitheater and the labyrinth were included in the initial master plan, according to Wendt. However, she noted, that at an estimated building cost of $1.5 million to $2.5 million, the amphitheater was “not part of this discussion, but part of the larger picture.”

The group advocating for the Beachfront Park Labyrinth Project is proposing that it be located in the southeast corner of the park and be constructed of cement and crushed granite in two colors. Current building costs are estimated to be $25,000 to $40,000, according to the group.

There will be a separate conceptual design budget, according to the group, which could include signs, plants and donation tiles and benches.

If Crescent City constructs a pump track at Beachfront Park it will be the Golden State’s fourth and the only one on the California coast, Wendt said. A circuit of rollers, banked turns and other features, a pump track is similar to a bike park, though the price tag is much less. According to Wendt, Weaverville recently constructed a pump track at $120,000, while a “full blown” bike park could be $500,000.

Though a pump track is for bicycles, Joe Gillespie, founder of the Del Norte Trail Alliance, which is advocating for a Beachfront Park facility, said skateboarders are welcome. The pump track can also be used by people of all ages, he said.

Members of the Del Norte Disc Golf Club advocated for revamping Beachfront Park’s course. The club requested $30,000 to replace rusted baskets with new ones, install safety barriers and signs asking players and other park users to be cautious of one another.

Club founder Ron Cole said other than the possibility for vandalism, the course’s popularity “monitors itself and monitors the park.” It takes very little to maintain it, he said.

The Disc Golf Club has been in existence since 2005 and holds annual tournaments, Cole said. The Disc Golf Course also draws visitors to the area, he said.

Cole said he’d like to see the park used more and hopes the city considers purchasing vacant land near Battery Point Lighthouse and incorporate that area as part of the Disc Golf Course.

Travis Cairns, who was at Monday’s meeting with his daughter Aurora, said he’d like to see existing park features repaired rather than new ones constructed. An avid disc golfer, he said the course was getting old. Before Crescent City Dogtown existed, Cairns said, disc golfers played on a 24-hole course. Now, he said, it’s a 22-hole course.

Kidstown could use a facelift too, Cairns said.

“I’m not into a massive overhaul,” he said.