DNTA President: Teachers Can Strike As Early As Jan. 15 If Fact Finding Fails 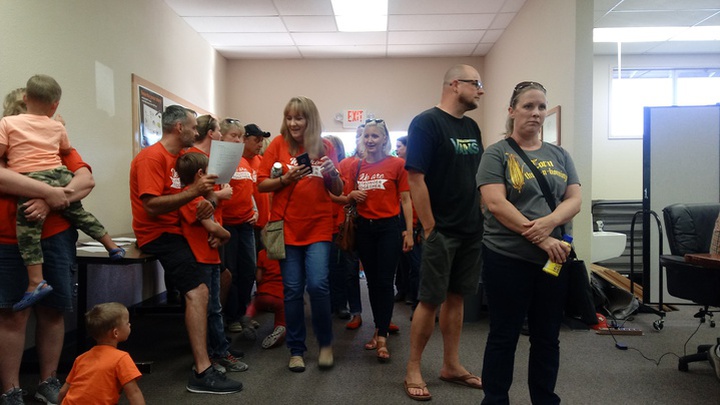 Teachers made a last stand before the Del Norte Unified School District Board of Trustees on Thursday before the union that represents them heads into fact finding next month.

“We’re not allowed to strike unless all avenues are exhausted, that includes going through fact finding,” Jones said. “At the end of fact finding (the district) will have a final and best offer for us. Then it’ll go to the membership and they’ll either take it or leave it. If they say no, then we’ve exhausted all ability to be able to negotiate and that frees us up to be able to strike if we choose to do so. At that point, we survey our membership one more time and go from there.”

According to Jones, Thursday was the last time the school board will meet until Dec. 12. During fact finding, a representative from both parties will meet with an impartial third party who will give a recommendation.

If they don’t agree on a resolution, DNTA will ask its members if they want to strike, according to Jones.

If teachers do strike, schools will still be open, DNUSD Assistant Superintendent of Business Jeff Napier told the Outpost. Teachers won’t be paid and will not receive retirement credit for they days they’re on strike, he said.

“We just try to come to an agreement as soon as possible to end the strike,” Napier said Friday.

DNTA and district administrators began negotiating a 2019-2020 contract since last spring. Teachers asked for a 6 percent raise and a $1,000 increase to the health and welfare benefits

The district offered to either increase teacher pay by 1 percent or apply that 1 percent to their health and welfare benefits. Administrators said an expected 3.26 percent cost of living adjustment wouldn’t be sufficient to raise salaries further.

In August, DNTA representatives said they were willing to take a 1 percent pay raise if the district agreed to eliminate enough professional development days and adjunct hours to equal a 3.35 percent increase. In September, district officials stated again the COLA wouldn’t be enough to increase teacher pay.

On Friday, Jones said DNTA members want a 3.54 percent pay raise and a $795 increase to their health and welfare benefits. The district’s offer, he said, hasn’t changed from a one-time 1 percent increase based on student enrollment. If enrollment drops, the salary increase would not be in effect next fiscal year, Jones said.

“Come February, the whole contract is opened up because it’ll be time to negotiate again,” he said.

Though he didn’t offer specifics when asked if the district’s offer had changed, Napier said there was discussion about DNUSD offering more, but he wasn’t sure if that was considered.

Citing the most recent state-certified data available, Napier told the Outpost that teachers received a 4 percent salary increase for the 2018-19 school year, increasing the beginning salary to $47,093. In 2017-18, the average teacher earned $66,169, he said via email.

However it’s more than what teachers at the same level receive in Klamath-Trinity Joint Unified, South Bay Union Elementary, Jacoby Creek Elementary and Scott Valley Unified districts. A beginning salary for teachers at Eureka City Schools make $39,975 in 2017-18, according to Napier’s data.

“The district feels we have given them a fair offer,” Napier said. “Look at all our neighboring districts, our salary schedules are very competitive.”

Eureka City Schools is the most comparable to DNUSD since they're roughly the same size, Napier said.