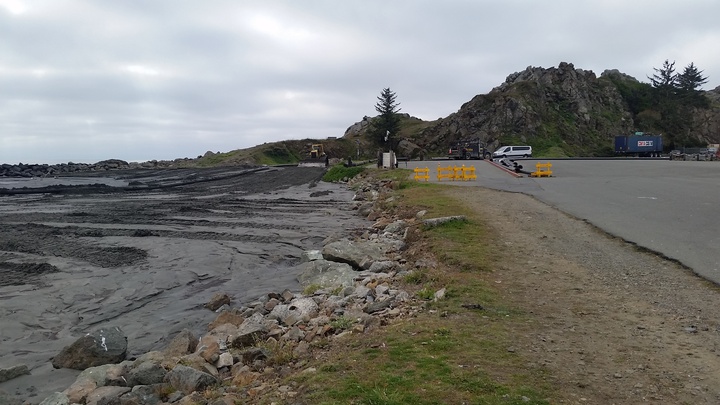 Crescent City Harbor officials say dredged sand deposited at the Whaler Island Groin could potentially change the wave dynamics during a storm and poses a danger to Anchor Way and its public boat launch.

Though he said it’s not perfect, Harbormaster Charlie Helms told commissioners Tuesday that he placed K rail in the area to mitigate potential impacts. However, elected officials urged him to report the incident to the U.S. Army Corps of Engineers, whose staff are tasked with dredging the port’s Inner Boat Basin.

“It’s going to do some damage,” Commissioner Rick Shepherd told Helms. “(Waves) will come right over our road and it’s going to break up the docks again.”

A groin, or groyne, is a low wall or barrier built into the sea from a beach to protect a coastline from erosion, according to Oxford English Dictionary.

Deputy Harbormaster Lane Tavasci, who is roughly six feet tall told the Wild Rivers Outpost that the rocks in a low spot of the Whaler Island Groin, called the saddle, were over his head. Now, he said, the barrier comes up to just past his knee.

Tavasci said he and Helms hope that the K rail will force water back toward the ocean and prevent any debris from being washed onto the roadway.

When they’ve finished dredging the harbor, the Army Corps will bring a survey team to measure the depth and report how many cubic yards they dredged and put into the groin, Tavasci said.

The Army Corps contractor tasked with the dredging project was given a designated area at the Whaler Island Groin to deposit the dredged sand, Army Corps spokesman Nicholas Simeone told the Outpost via email Thursday.

Depositing the sand in that area would allow wave action to carry it away over time, Simeone told the Outpost.

“We have been in frequent contact with the harbormaster and are assessing whether there is any risk to the nearby roadway,” Simeone said. “(We) will work with our contractor in an effort to make adjustments should they be proven necessary.”

At Tuesday’s meeting, Helms said staff weren’t consulted about where the dredge material should go.

Shepherd, a commercial fisherman, said dredge material had been deposited near the Whaler Island Groin before, but there was more debris this time. Shepherd urged Helms and Tavasci to get the U.S. Coast Guard involved since their CG Cutter Dorado is moored at the end of Anchor Way.

“It’s not our liability that the Coast Guard can’t get out there,” he said. “Somebody’s going to be liable, but at least it won’t be us because we have pictures. We didn’t create this mess.”

Shepherd said when he was at the groin after the dredge material was deposited there, though it was calm, he saw waves breaking almost on the road.