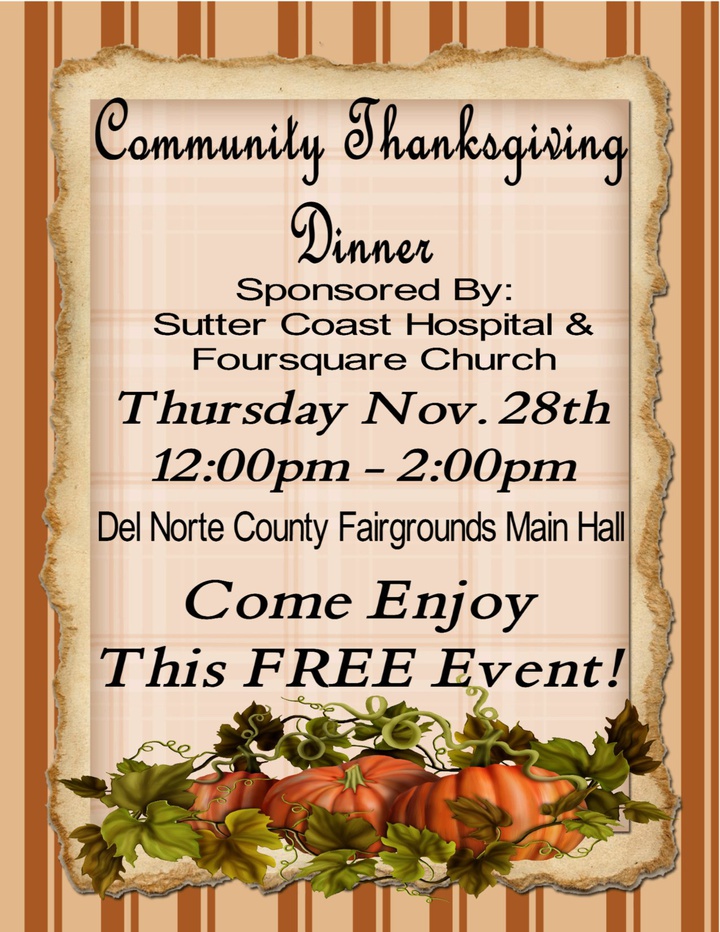 Though people are asking him if Del Norte's annual Thanksgiving feast will be a candlelit affair, Roger Bodenstab says he’s hoping the lights will stay on this year.

Last year’s power outage during the community’s annual holiday get-together at the Del Norte County Fairgrounds proved how resourceful volunteers and attendees were. Servers dished out  turkey, mashed potatoes, stuffing, green bean casserole and pie by cell phone flashlight while others ran to get candles.

Bodenstab, pastor at Crescent City Foursquare Church, which has spearheaded the community Thanksgiving Dinner with Sutter Coast Hospital for about three years, said he’s hoping this year won’t be a repeat of 2018’s feast. But he has candles just in case.

With a little over a week to the dinner, though, Bodenstab said the church needs about 20 volunteers to help set out tables and chairs, serve meals, bus tables and clean up when the feast is over. The annual event will be held from noon-2 p.m. Thanksgiving Day — Nov. 28 — at the Del Norte County Fairgrounds.

“There are so many people who want to serve on that day, but we do need another 14 people to come help set up the day before,” Bodenstab said. “We’ll be doing that from 10 a.m.-noon in the main hall.”

Del Norte County’s Thanksgiving dinner began 27 years ago and was spearheaded for about 25 years by Teri Sandler, whose husband, Ron, owns Del Norte Ambulance. About three years ago, Sandler decided to retire, handing the reins to Sutter Coast Hospital, which provided and cooked the food.

Though Sutter Coast Hospital provides the food, and the staff needed to prepare it, Bodenstab said the church does accept monetary donations for the Thanksgiving Dinner. A reserve of funds has ensured that the church hasn’t had to reach out to the community on a regular basis, but Bodenstab said those monies will be used up this year.

“Next year we’ll reach out to the community to make sure we get it funded fully,” he said. “This year we’ll run a few hundred dollars short of the actual cost of it, (people) can give monetarily through our website, ccfoursquare.org, and click on Thanksgiving.”

Volunteers and those who can are also encouraged to bring a canned food item for the local food bank, according to the church’s Facebook page.

Volunteers serve an average of about 600 meals each year, Bodenstab said. They also let people take their feast to-go, and ensures that those who aren’t able to come to the fairgrounds are also fed, he said.