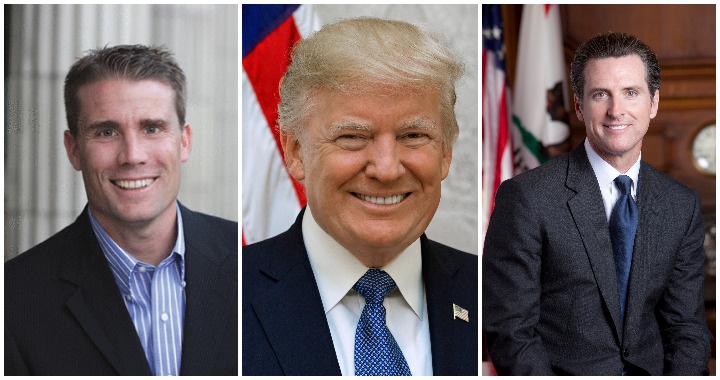 From the Office of Gov. Gavin Newsom

SB 27, by Senator Mike McGuire (D-Healdsburg) and Senator Scott Wiener (D-San Francisco), requires a candidate for U.S. President or California Governor to file copies of every income tax return filed with the Internal Revenue Service in the five most recent taxable years with the Secretary of State, at least 98 days prior to the corresponding primary election.

In signing the legislation, the Governor issued the following signing statement:

To the Members of the California State Senate:

Today, I am signing SB 27, the Presidential Tax Transparency and Accountability Act. I agree with the Legislature that “the State of California has a strong interest in ensuring that its voters make informed, educated choices in the voting booth.” As one of the largest economies in the world and home to one in nine Americans eligible to vote, California has a special responsibility to require this information of presidential and gubernatorial candidates.

These are extraordinary times and states have a legal and moral duty to do everything in their power to ensure leaders seeking the highest offices meet minimal standards, and to restore public confidence. The disclosure required by this bill will shed light on conflicts of interest, self-dealing, or influence from domestic and foreign business interest.

The United States Constitution grants states the authority to determine how their electors are chosen, and California is well within its constitutional right to include this requirement.

In October of 2018, the Brennan Center’s National Task Force on Rule of Law and Democracy, a bipartisan group of former public servants and policy experts, recommended that Congress standardize and codify the longstanding practice of tax return disclosure by sitting presidents, vice presidents, and candidates for those offices to assist voters and deter corruption. I agree. This law should be a national standard

Accordingly, I am signing Senate Bill 27.

Governor Newsom has made releasing tax returns a priority in his campaigns for San Francisco Mayor, Lieutenant Governor and Governor. The Sacramento Bee wrotein 2017 Newsom “set a standard of transparency” for releasing 6 years of tax returns in his campaign for Governor, and after being elected Governor, Newsom announced he will become the first Governor in state history to release his tax returns on a yearly basis.

SB 27, which requires that presidential candidates disclose tax returns, is constitutional. It does not keep any candidate from being on the ballot so long as he or she complies with a simple requirement that is meant to provide California voters crucial information. This is the state acting to make sure that its voters have information that might be very important to them when they cast their ballots as to who they want to be President of the United States.

SB 27, which would require a presidential candidate to publicly release redacted versions of her tax returns before her name can be placed on a California ballot for President of the United States, is constitutional. As the Ninth Circuit recently explained, such laws are constitutional if they are “generally applicable, even-handed, [and] politically neutral,” and the State has an important justification for enacting the law. De La Fuente v. Padilla, No. 17-56668, 2019 WL 3242193, at *3 (9th Cir. July 19, 2019).

Here, California’s bill meets all of these requirements. It will apply to any candidate for President, whether Republican, Democrat, or Independent. And as the State Legislature concluded, the State has important interests “in ensuring that its voters make informed, educated choices in the voting booth,” among many other important reasons.

Every President from Richard Nixon to Barack Obama voluntarily chose to release his tax returns when running for office.  Releasing tax information should be a prerequisite for appearing on the ballot for the highest office in the land, and the Constitution does not forbid California from making it one.

California SB-27, which would enact the Presidential Tax Transparency and Accountability Act, is constitutional. That bill would require a candidate for President or Governor to file the candidate’s five most recent years of income tax returns with the California Secretary of State in order to have their names placed on California’s primary election ballot. Redacted versions of those returns would be made available to the public. The U.S. Constitution gives each state the authority to determine how that state’s electors are chosen, limited only by compliance with other constitutional provisions, such as equal protection. No other constitutional provision is implicated or violated by a state’s requirement that a Presidential candidate disclose tax returns. Moreover, California, which permits electors to be chosen by popular vote, has an important interest in insuring that its voters are informed. I also would note that people are regularly required to produce their tax returns pursuant to state law for far less consequential matters than a Presidential election, such as civil litigation or obtaining a loan from a bank.