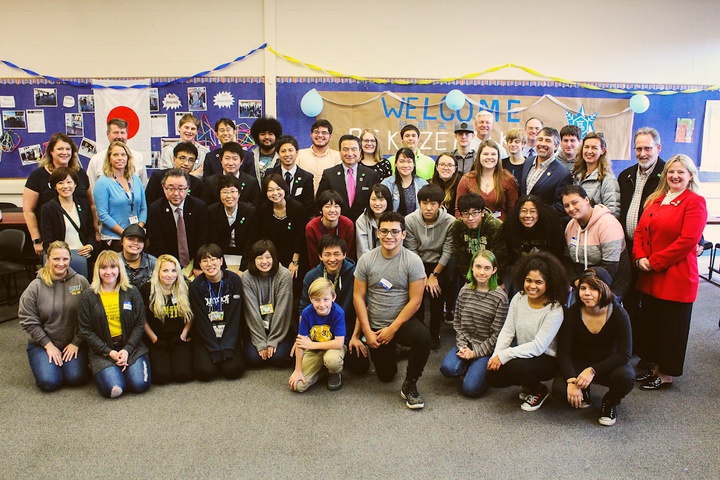 A delegation of teachers and education officials that visited from Rikuzentakata in January take a group shot with Del Norte High School students. Photo: Courtesy of Michael Hawkins

Businesses may not have to chip in for a public relations campaign seeking to turn media coverage on Del Norte’s relationship with Rikuzentakata during the 2020 Olympics into an economic driver for the local community.

Cindy Vosburg, executive director of the Crescent City-Del Norte Chamber of Commerce, told the Wild Rivers Outpost Thursday that she secured $10,000 from the Yurok Economic Development Corporation. Vosburg said she will make a presentation before the Elk Valley Rancheria Tribal Council next week and is reaching out to the Tolowa Dee-ni’ Nation and Resighini Rancheria as well.

Those dollars will be used to pay for a $59,000 public relations project that seeks to capitalize on the NBC Sports feature planned for the 2020 Tokyo Olympics focusing on the evolving sister city relationship between Del Norte County and Rikuzentakata.

If local tribes contribute, Vosburg said the chamber won’t have to seek donations from private businesses. But, she said, she hopes business leaders support the marketing project.

“We as a community will not control the story that gets told, but they’re telling our story,” Vosburg said of the NBC Sports feature. “This is still a great thing that’s going to happen, but by being on the cutting edge and going after the exposure…. It would be shameful not to try to get as much exposure as we can.”

While leaders in local government, including the school district, and business prepared to welcome 35 visitors from Japan, Vosburg and Rob Holmlund, owner of Eureka-based Malex Consulting, has introduced the proposed PR campaign to elected officials.

The project’s goal is to “solidify and enhance” the sister city relationship between Del Norte County and Rikuzentakata as well as to grow community pride and enhance disaster preparedness, according to Vosburg. The project also seeks to increase tourism and stimulate economic growth in Crescent City and Del Norte County.

According to Del Norte County Board of Supervisors Nov. 12 staff report, Holmlund, who has been working in economic and community development for about 15 years, will be part of a coalition of partners seeking to exploit the media attention the community’s relationship with Rikuzentakata will receive from NBC Sports.

Though it’s not uncommon for multiple entities to get together and work for a common purpose — Holmlund cited joint-powers authorities as an example — he said it was difficult to compare the relationship between Del Norte and Rikuzentakata to anything he’s ever worked with before. However, it’s not unique for a community to want to boost their economy through exposure during a massive media event like the Olympics.

“It’s a movement away from an older model of destination marketing,” Holmlund told the Outpost on Thursday. “Instead of a simple ‘Gateway to Yosemite’ or ‘Gateway to the Redwoods,’ tourists are people wanting to go to authentic places with authentic stories.”

The story of Kamome, the 20-foot fishing vessel that the 2011 tsunami swept away from Rikuzentakata and deposited on South Beach two years later, is an example, Holmlund said.

The friendship that grew between the two communities, first between the youth and then among the adults, captured NBC’s attention, Vosburg said.

Crescent City Mayor Blake Inscore and District 3 Supervisor Chris Howard announced in March that they had been communicating with NBC, Vosburg told the Outpost. She said the two elected officials weren’t sure if the sister city relationship would be a short spot on NBC or what the network had in mind. NBC Sports continued to reach out over the summer and, in September, visited Crescent City to shoot footage, Vosburg said.

An NBC camera crew is expected to be in Del Norte County next week to document the ongoing cultural exchange with Rikuzentakata, according to Inscore.

On Wednesday, Inscore told the Outpost that he and Howard spoke with NBC Sports producer David Picker on the phone on Tuesday about leveraging the opportunity presented through the network’s feature. Inscore said he and Howard were concerned about how to take advantage of the coverage without stepping on NBC’s toes.

“Neat things are starting to happen, but it takes time to put all those things into place,” Inscore told the Outpost. “I’m excited about the potential. I hope that we don’t get people who get back into that naysayer (attitude).”

Any public relations campaign must also benefit Rikuzentakata, Holmlund said. One goal is to make residents in that community feel like heroes. This could include educating visitors to Del Norte County about Rikuzentakata and exposing visitors to Japan about what Northern California is like, he said.

Promoting Rikuzentakata could also mean encouraging local restaurants and stores to carry products from that region in Japan as well as creating promotional videos about both communities in English and Japanese, Holmlund said.

Continuing to fund delegations to visit Rikuzentakata and help it rebuild is also important, Holmlund told the Outpost.

“We want to dig down deep to find a way to (make this) better for them than it is for us,” he said. “They’re a part of our family.”

There are a few skeptics regarding the marketing project. In a report to her colleagues on the Crescent City Harbor District board Tuesday, Commissioner Carol White, who represents the port on the chamber of commerce board, said during a recent chamber meeting, business representatives said they wanted to know how the project would benefit them.

“There was discussion there were two businesses being profiled and getting all of the accolades and exposure,” White told her colleagues on Tuesday. “There was a lot of concern, ‘now you are asking us for money when we’re not being profiled.’ I don't know how they’ll overcome the negativity and, let’s face it, small businesses struggle in this town.”

White said there was also concern about the extra work the PR project is placing on chamber staff, including Vosburg.

“They’re already overworked and exhausted, where’s that money coming from,” White said, though she added she’s “just reporting” and has “no opinion one way or the other.”

When asked about White’s comment, Vosburg told the Outpost that economic development is part the chamber’s role and her job as its director. Vosburg said she’s also director of the Del Norte County Visitors Bureau, which seeks to boost local tourism.

Holmlund has the credentials to be able to spearhead the campaign focusing specifically on the sister city relationship between Del Norte County and Rikuzentakata and the potential media coverage from the Olympics, Vosburg said. But, she said, speaking with community leaders is part of her job.

“That falls in line with what my responsibilities would be anyway,” Vosburg told the Outpost. “We talked about the concerns, ‘As a small staff, how can we take this on?’ and it went to, ‘How can we not take this on?’”

Vosburg said she hasn’t heard any business owners saying they’ve felt left out of the budding sister city relationship between the two communities. The businesses that have been spotlighted as a result of the relationship, she noted, developed local products before NBC Sports indicated it was interested in featuring Crescent City and Rikuzentakata.

The delegation from Japan will fly into Crescent City at about 7:30 p.m. Sunday. A community gathering is planned to welcome the visitors starting at about 6:30 p.m. Sunday at the Del Norte County Airport on Dale Rupert Road.