Youngsters Pitch In To Craft Canoes For Yurok Tribe's Tours 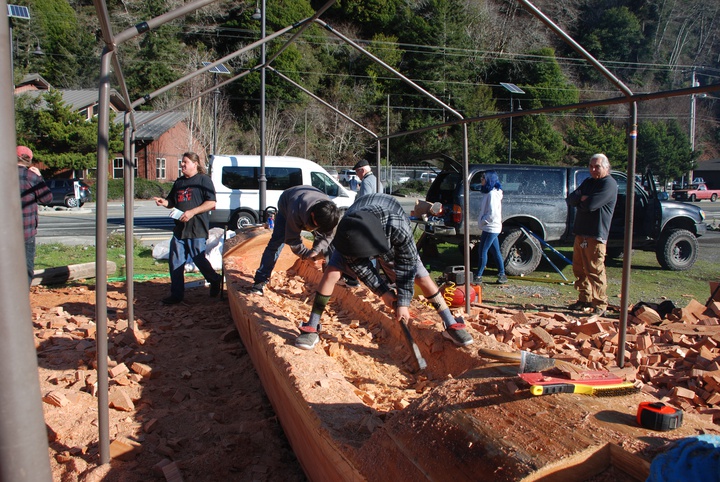 Segep and Chulhs Bates use adzes to hollow out a redwood log, crafting one of the canoes the Yurok Tribe will use in its tours this spring. Photo: Jessica Cejnar

A chainsaw would have made short work of a process that typically takes two years, but Segep and Chulhs Bates used a tool their ancestors would have been familiar with — the adze.

On the final Monday of the year, the 11- and 12-year-old boys dug the hand-held chisel into a redwood log, creating one of the vessels the Yurok Tribe will use in its redwood canoe tours.

Though the tours aren’t expected to begin until June, the canoes have already drawn visitors to Klamath. While overseeing the Bates boys, David Severns narrated the process for a group of travelers from Germany on Monday.

“There are three canoe builders left and I’m the youngest,” he said.

A redwood dugout canoe is a member of the family in a Yurok household and is the highest price a Yurok man would pay for a wife, Severns said. It has a nose, heart, lungs and kidneys. Whoever sits in the chair is responsible for everyone who sits in the vessel.

One canoe can accommodate a family of six people, Severn said.

The canoe Severns, Segep and Chulhs were constructing on Monday is the second to be built in Klamath, said Linda Cooley, deputy director of the Yurok Economic Development Corporation. The logs came from the Yurok Tribe’s experimental forest with assistance from the U.S. Forest Service, Cooley said.

The logs are from old-growth trees, Tribal Chairman Joseph L. James told the Outpost. He said the tribe and the U.S. Forest Service entered into a partnership to use the logs for the tribe’s redwood canoe tours.

The tribe expects to begin its Redwood Yurok Canoe Tours starting the first weekend in June, according to James. Two-hour tours will cost $125 per person and will offer an experience people won’t “get anywhere in the U.S.,” he said.

“It’s a history of the Yurok life way and culture,” James said, “of who we are.” 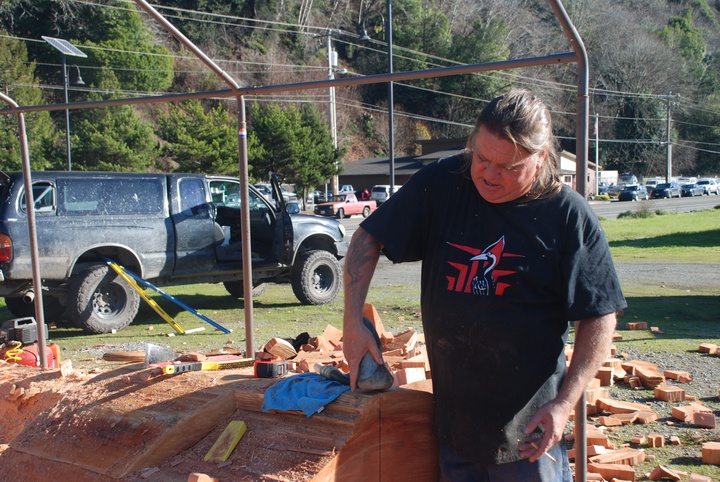 David Severns, the Yurok Tribe's youngest canoe builder, discusses how his ancestors would craft a vessel that would be a valued member of the family. Photo: Jessica Cejnar

Tours will also be offered to local groups and schools, Cooley said.
The idea to introduce visitors to the Klamath River via canoe was born in the Yurok Tribe’s transportation department and was spearheaded by James and department employee Isaac Kinney, Yurok planner and project manager Josh Norris told the Outpost in October.

The tribe conducted a feasibility study, interviewed visitors and completed a business plan in 2015, Norris told the Outpost. A Maritime Heritage Grant from the National Park Service helped get the project started, according to Norris.

The tours will be run in partnership with the Yurok Economic Development Corporation, which also operates Redwood Hotel Casino, the Klamath Jet Boat Tours and the Yurok Country Visitor Center.

On Monday, James said that in addition to giving travelers an intimate look at the importance of the Klamath River to his people, the tours also mean jobs to residents. Plus, he said, people visiting Klamath to go on a redwood tour will spend money in Crescent City, in KLamath and in Humboldt County.

James noted that with Severn and other Yurok people building the canoes at the townsite near the casino, people are already getting a glimpse of his people’s way of life. The tribe is opening themselves up, using modern tools, James said as Severn started up a chainsaw.

“Back in the day it took up to two years for one canoe,” James said. “With modernized tools we can build it within two to three months.”