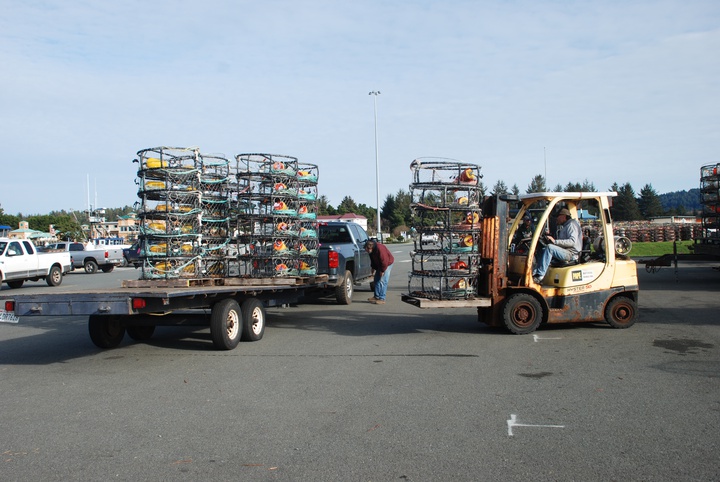 The crew of the FV Lori loads crab pots onto a pickup truck at the Crescent City Harbor on Friday, the day before fishermen are able to drop their gear for Commercial Dungeness season. Photo: Jessica Cejnar

The day before they were allowed to set their gear, commercial crab fishermen in Crescent City waited Friday as industry representatives negotiated a price with seafood buyers.

At about 11 a.m. Friday, Shepherd had stepped outside the Fishermen’s Wives Memorial Hall at the harbor where negotiations with buyers were taking place.The $2.75 per pound offer came primarily from Pacific Choice Seafoods, he said.

Most West Coast Dungeness fishermen thought that offer was too low, Shepherd said, but buyers think $3.50 is too high.

“As of today, we’re trying to get everybody to wait until we get a counter offer,” he told the Outpost.

The delay to the season, which typically starts Dec. 1 on the North Coast, was due to soft shell, or poor crab quality. However, quality test results from Dec. 17 met the Tri-State Dungeness Crab Committee’s minimum guidelines, according to a Dec. 20 CDFW news release. This determination prompted the committee to open fisheries coastwide, according to the news release.

Under guidelines set by the Tri-State Dungeness Crab Committee, the crustaceans’ meat weight to total weight is evaluated to determine if they’re ready to harvest.

Though quality issues delayed the North Coast’s season twice, Shepherd said Friday he expects the crustaceans the fleet will bring in Tuesday to be “really good.” Based on tests fishing industry representatives conducted, he said, the crab have a meat content of 25 to 26 percent. In some the meat content was as high as 27.3 percent, Shepherd told the Outpost.

“I don't hear quality problems anywhere on the Coast,” he said.

While Shepherd and his colleagues haggled over price with seafood buyers, Andy Lang and Jordan Markanson, deckhands with the Fishing Vessel Sunset, were among other deckhands making sure crab pots were ready for the soaking period on Saturday.

Markanson said he and his fellow deckhands had been preparing the vessel they work on and its gear since the end of October since, barring delays, the season starts in December. Now, he said, they’re waiting on price negotiations.

Last year, though the North Coast Dungeness fishery was delayed to Jan. 15, most fishermen didn’t ply their trade until February because of issues involving price. Last year’s season also ended in April — three months early — due to a settlement agreement between CDFW and the Pacific Coast Federation of Fishermen’s Associations and the Center for Biological Diversity over endangered humpback whales, blue whales and Pacific leatherback sea turtles.

CDFW have a set of “best practices” for crab fishermen developed by the Dungeness Crab Fishing Gear Working Task Force. This includes following guidance on surface-gear set-up, reducing excess line, using neutral buoyancy line and minimizing knots and lead, according to the release.

Markanson noted that the presence of whales may cause the season to end early — something neither he nor his colleagues want.

“We’re hoping it works out for us,” Markanson said. “A good safe season and no whales.”