Hot Week Ahead: Temperatures Could Reach 80 Degrees in Brookings »

Del Norte On Board With HSU River Otter Art Project 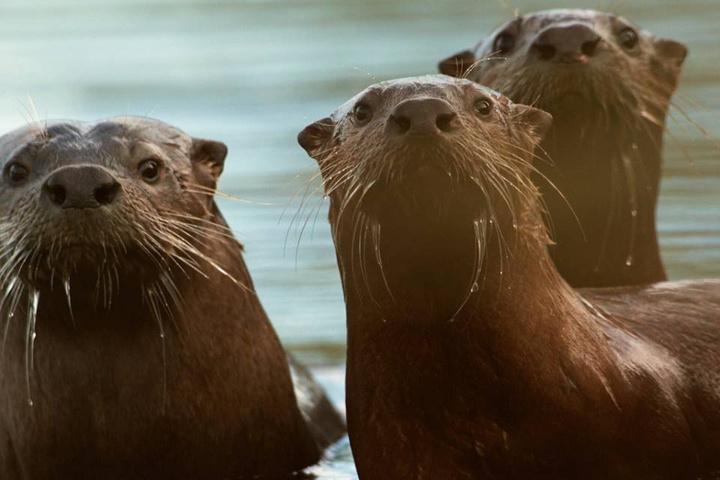 Del Norte artists, educators and wildlife enthusiasts are joining a Humboldt-based public arts initiative celebrating one of the cutest creatures to live on the North Coast.

The North Coast Otters Public Art Initiative will consist of 100 sculptures placed at businesses, art galleries and other public places, Black said. Each is 3-feet tall and depicts an otter standing upright and will be painted with different designs by a local artist.

Black, who has been running a "clearinghouse" of otter sightings with his students for about 20 years, said the art initiative is to raise awareness about clean water and a healthy habitat and to celebrate that the charismatic creature still exists on the North Coast.

“(It) is a signal to us that we do have clean enough water to support this top predator in the system,” Black said. “You’ve heard of the canary in the coal mine idea — if the canary falls over, you know you have to get out? Communities that don’t have otter mean you better not be in the water because it’s not very good for you.”

Black was inspired by a similar public arts program in England’s Dartmoor National Park. The Moor Otters Project consisted of 101 sculptures and generated 60,000 pounds toward conservation efforts and the development of a junior ranger program.

“There doesn’t seem to be a downside,” Donovan said.

Ten artists, current and former members of the California Redwood Art Association, will decorate the otters, Donovan said. This includes Harley Munger, founder of Piece-by-Piece Pottery who, along with a student from Sunset High School, will turn their otter into a tile mosaic. On Monday, Donovan received permission from the Crescent City Council to display that otter at the Fred Endert Municipal Pool as part of the overall art trail next summer.

Other partnerships include SeaQuake Brewing, Red Sky Roofing and the Del Norte County Library, which will also have an otter at its Smith River branch, Donovan said.

The Yurok Tribe and Tolowa Dee-ni’ Nation will display an otter at their visitors centers, Donovan said. Elk Valley Rancheria will have one at its community center on Howland Hill Road, he said.

Artists will receive the otters on Sept. 1 and have until December to decorate them, Donovan said. They’ll go back to Humboldt State where they will be photographed and put into an “otter spotter,” a map showing where each one is. The otters will return to Del Norte County and be on display during the summer of 2020.

At the end of the tourist season, people will have a chance at owning an otter by taking part in live and silent auctions, Donovan said. Thirty otters from Humboldt County will be given away via a live auction, while the rest will be part of a silent auction, he said.

On Monday, Crescent City’s new director of recreation, Holly Wendt, said the cost of having an otter at the Fred Endert Municipal Pool is $700 with the city contributing half, or about $350.

“That money has already been set aside in the Fred Endert Pool budget as part of our marketing funds,” Wendt said. “We think this would be a great opportunity to have an event to launch the summer season for 2020. We could put a little bit of the history of the project, Mr. Munger could talk about his design, the students that help Mr. Munger create the otter mosaic could be there, we could have a tour of the pool, increase awareness about the project as well as have opportunities for community engagement and awareness for Beachfront Park and activities we’ll have going on this summer.”

The Council was enthusiastic for the project, but Mayor Blake Inscore noted that just as Crescent City gets used to its otter, it’s going to go away. He suggested the Council and community begin thinking of ways to bring the porcelain creature back home when it leaves.

“I looked at Dartmoor, they had 101 of them and sold them for 61,000 pounds, a little over $600 apiece,” Inscore said. “That doesn’t seem like a large investment for something that would be a neat addition to our art scape in our community.”

Donovan said the North Coast Otters Public Art Initiative has inspired another idea. He said he’d like to duplicate the otters’ design in cement and have 6-foot tall sculptures placed along the U.S. 101 corridor through Del Norte County. This, he said, would require getting approval from Caltrans, which owns the highway.

“We’ll have them painted the same way the otters here would be painted and placed in strategic places as you come into Del Norte County,” he said. “When you’ve got 14 or 16 of them place them all along 101 here in the city itself. We hope to become known then as the North Coast Otter Capital of California. I have big plans.”