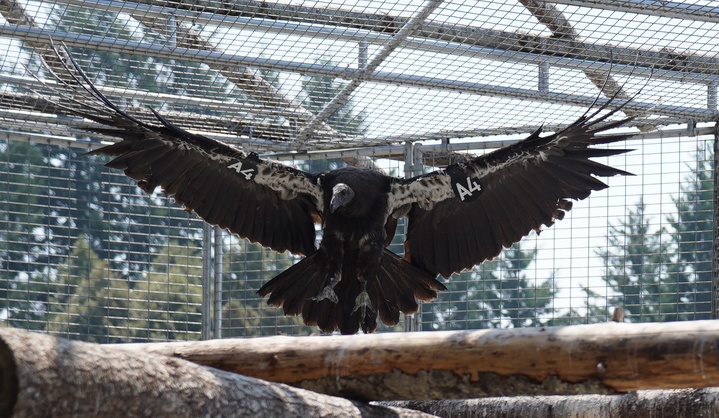 The first two birds of the second California condor cohort will be released over Yurok ancestral lands on Monday. | Courtesy of the Yurok Tribe

At 6am on Monday, October 10, the Northern California Condor Restoration Program (NCCRP) will attempt to release two more prey-go-neesh (California condors) into Yurok ancestral territory. The potential release can be viewed live on the Yurok condor cam, which can be found here: https://www.yuroktribe.org/yurok-condor-live-feed On Monday morning, Yurok Wildlife Department Director Tiana Williams-Claussen will be providing real-time commentary on the release via Facebook Live. The livestream can be viewed on the following page: https://www.facebook.com/TheYurokTribe

“We are extremely excited to start releasing our second prey-go-neesh cohort,” said Yurok Wildlife Department Director Tiana Williams-Claussen. “The birds we released in the spring and summer are doing great. I would like to thank all of our project partners and supporters for their contributions to the Northern California condor recovery effort.”

For the release, NCCRP biologists will employ a multistep procedure to keep the juvenile birds as calm as possible during the transition into the wild. First, the NCCRP team will wait for previously released prey-go-neesh to land within sight of the condor release and management facility. The free-flying birds signal to the captive condors that it is safe to exit the flight pen. Second, the NCCRP will open the door to a trap on the side of the flight pen. The gate will remain open until two birds enter the enclosure, which serves as a staging area. Once this occurs, the staging area door will be opened and the birds will have access to the outside world. Prior to the release, the birds must voluntarily enter and leave the staging area. The timing of the release is entirely contingent upon the birds’ movements. Additionally, young, captivity-raised prey-go-neesh are incredibly cautious. It might take multiple days for them to depart from the facility. 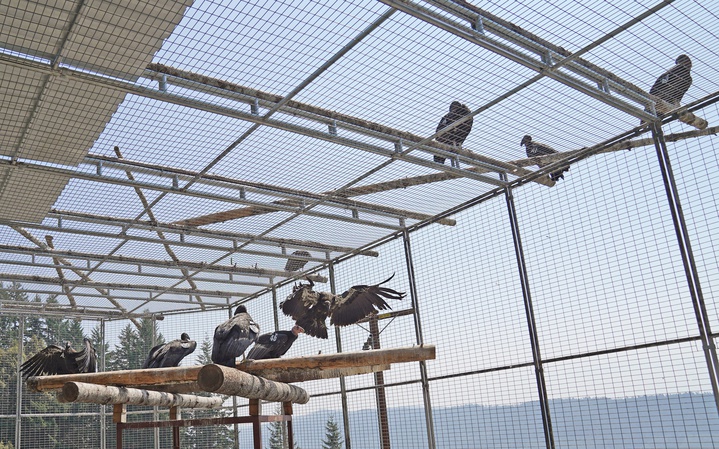 The second two birds in the cohort will be released later this month. | Courtesy of the Yurok Tribe

The two condors are part of a group of four. Over the next month, the NCCRP will release the remaining two prey-go-neesh. When the NCCRP releases the fourth member of the second cohort, there will eight free-flying condors in Yurok Country. The staggered release is one component of a comprehensive plan to ensure the success of the young birds. The newest condor cohort arrived in mid-August and has had ample time to acclimate to the local environmental conditions and become familiar with the NCCRP’s wild condors. The cohort is comprised of three males and one female. All of the birds were born between April and June of 2021.

The Oregon Zoo's Jonsson Center for Wildlife Conservation and the Peregrine Fund’s World Center for Birds of Prey each reared two of the prey-go-neesh. Releasing juvenile birds is a standard practice at all of the condor reintroduction sites in the US and Mexico. Decades of data show that young condors are more resilient and fare much better in the wild. The NCCRP, a partnership between the Yurok Tribe and Redwood National and State Parks, plans to reintroduce one cohort of prey-go-neesh every year for at least the next two decades. The tribe and park collaboratively manage the population.

In May, the NCCRP released the first of four condors to fly over Yurok skies in more than a century. The fourth bird was reintroduced to the wild in July. The birds include: Ney-gem' 'Ne-chween-kah (She carries our prayers, A0), Hlow Hoo-let (Finally, I/we fly A1), Nes-kwe-chokw' (He returns/arrives, A2) and Poy'-we-son (The one who goes ahead, “leader” A3). The condors are thriving in the redwood region.

The Yurok Tribe and Prey-go-neesh

The Yurok Tribe initiated the condor reintroduction project in 2008. The restoration of this sacred species is an important element of a far-sighted plan to bring balance back to the coastal rainforest ecosystem in Yurok ancestral territory on the far Northern California coast. In addition to the reintroduction of the critically endangered condor, the Tribe is currently restoring fish and wildlife habitat on a landscape scale in the Klamath River basin. The Tribe is also intimately involved in the pending removal of four Klamath River dams, which represents the largest river restoration project in US history. The removal of the dams will benefit a wide diversity of fish and wildlife species, including condors

With funding support from the Yurok Tribe, Redwood National Park, the U.S. Fish and Wildlife Service, the Bureau of Indian Affairs, the Administration for Native Americans, as well as Pacific Gas and Electric Company, Global Conservation Fund, the Redwood National Park Foundation, and many more corporate, agency and private supporters and citizens, the Yurok Wildlife Department completed a vast volume of work to prepare for the reintroduction of this imperiled species.

Working in cooperation with the Ventana Wildlife Society, Redwood National Park, California State Parks, and Pacific Gas and Electric Company, as well as volunteers, the Tribe designed and built the NCCRP release and management facility. The flight pen includes a simulated, shock-wired power pole (to teach the birds to avoid this threat after release), two four-foot diameter pools and perches overlooking old-growth redwood forest. NCRRP staff monitor the birds from modified shipping containers which form a fire-resistant observation structure. The facility is also is designed to allow biologists and technicians to conduct regular health assessments and provide treatment if necessary.