« Brookings' Capella By The Sea Needs Volunteers During Light Show

Curry To Use Opioid Settlement Dollars For Alcohol & Drug Counselor for Probation, Jail 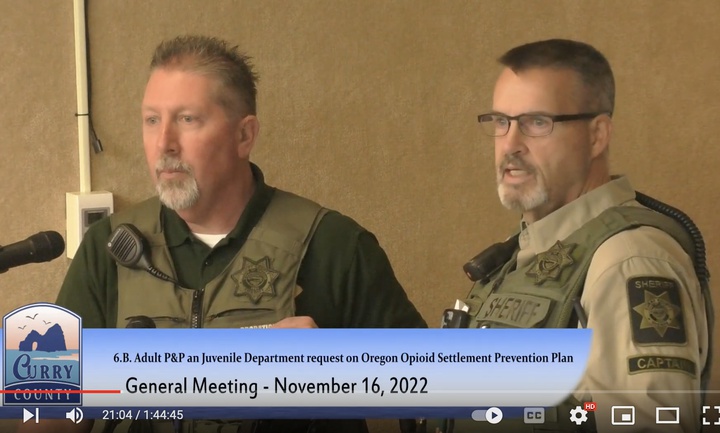 This person would offer outpatient therapy to those adults on probation and youth under county supervision as well as services to jail inmates, Adult Probation Director David Denney told commissioners Wednesday. The counselor would also conduct drug assessments during inmate intakes and would offer educational presentations and input “relative to program development needs,” he said.

The State of Oregon reached a settlement agreement in July 2021 on a national lawsuit involving pharmaceutical distributors McKesson, Cardinal Health and AmerisourceBergen as well as opioid manufacturer Johnson & Johnson.

The settlement awarded about $325 million to the state over the course of 18 years starting in 2022. The state has distributed 55 percent of that money — about $178 million — to cities and counties with populations greater than 10,000, according to the Oregon Health Authority.

Though he wasn’t sure about the exact numbers, Curry County Treasurer David Barnes said the county has already received between $36,000 and $38,000 from that settlement agreement. It’s set to receive another $41,000, he said.

Barnes estimated that the county’s total allocation from that opioid settlement agreement is $80,000 a year, though he said he’d have exact figures at the Board of Commissioners’ meeting in December.

Curry County Sheriff’s Capt. Phil McDonald said the court case has to do with the over-prescribing of opioids “all over the U.S.” The county will receive two payments every year over the next 20 years and the money can only be used for opioid treatment, education and cessation programs.

Adult Parole and Probation would supervise the new alcohol and drug counselor. Those services would be in addition to the mental health treatment Curry County inmates, adult probationers and juveniles receive through Adapt Oregon, McDonald said.

McDonald said once he and his colleagues were sure of the funding, they would bring a proposed budget to county commissioners for a final blessing.

The funding is non-competitive, said Juvenile Services Director Wendy Lang. Curry County has been “earmarked this money,” she said.

“You have a team of qualified people ready to take on a project,” she said. “It’s been sitting here for six months. To me, we are handing you a gift today.”