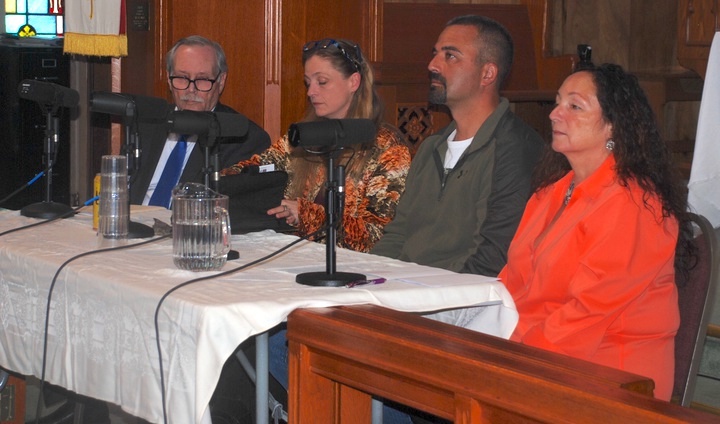 Candidates for the Del Norte County District 4 race participated in a candidate forum on May 3. | File photo: Jessica C. Andrews

With a margin of 38 votes between them and less than 50 ballots left for the Del Norte County Elections Office to process, the likelihood that Adams will face Joey Borges in a November run-off election seems certain.

“I don’t think we have enough ballots here that it’s going to make a difference on any of these races,” County Clerk-Recorder Alissia Northrup told the Wild Rivers Outpost.

However, the tally is still unofficial, Northrup said. She said she and her staff were still processing conditional voter registration ballots and provisional ballots.

According to the elections office, a race with three or more candidates is likely to go to a run-off election unless the winner receives 50 percent or more of the votes.

On Friday, Adams said she looks forward to the runoff in November and hopes for a better voter turnout.

Thinking ahead to the November election, Adams said she’ll likely stay forward on the two issues that were important to her in the weeks and months leading up to the primary — infrastructure and economic growth.

“I’ve been talking to some people who would like to see us add a vocational school,” Adams said. “And from somebody that I talked to, he had industry knowledge, and he said that would be something viable to do within a couple years rather than making sweeping promises. (This is) something more concrete.”

According to the latest election results, District 5 candidates former sheriff, Dean Wilson and appointed District 5 supervisor, Susan Masten, will face each other in a run-off election in November. Wilson received 40.66 percent of the vote to Masten’s 30.53 percent.

In the District 3 race, incumbent Chris Howard remains the clear winner with 57.13 percent of the vote to Magarino’s 23.24 percent and Joe “Hank” Akin’s 19.63 percent.

At the state level, local special education teacher, Charlotte Svolos, led in Del Norte County with 56.32 percent of the vote against Jim Wood for the California District 2 Assembly seat.

The latest election results show an improvement in voter turnout, though it’s still under 40 percent, Northrup said. What was unusual before, was that more than 2,000 ballots were submitted either through the mail, at the elections office or at a polling place in the two days before the election.