'I Don't Sell Water — I Make It, But I Don't Sell It'; Salem Company Looks To Bring Weather Modification Technology to Curry, Klamath Counties

Alexander Jenkins III says his company has the technology to make it rain and he wants to share it with Curry and Klamath counties for free for three years.

He proposes to install devices in either Brookings or Gold Beach and in Klamath County. At the end of three years, he says, the coastal communities will have three years' worth of water, salt and rare earth minerals such as cobalt and lithium to use how they see fit.

“I don’t sell water. I make it, but I don’t sell it,” Jenkins told the Wild Rivers Outpost following an Oregon Department of Agriculture public hearing in Gold Beach on Monday. “I believe in free will. I’m just doing a service. After three years my service ends and they’re able to — they most likely will — sign up for a new three-year contract, and they’ll pay for one. By then they’ll have three years' worth of product.”

Oannes’ weather modification technology pumps ocean water into a containment chamber, uses lasers to heat it to 3,000 degrees Fahrenheit and then cools the vapor to produce potable water as condensation. Powered by batteries, the technology is only about three years old, Jenkins said.

Weather modification is such a novel concept for Oregon that, though Oannes needs many licenses to build its device, its application is the first the state Department of Agriculture has considered since about the 1970s, said operations specialist Eric Nusbaum, who conducted Monday’s hearing.

“It’s a very complicated project and it has a lot of components to it and it will need several different licenses and permits from different federal, state and local agencies,” Nusbaum told the Outpost. “One of those licenses is the one related to our statutes, which say if you’re going to modify the weather through artificial means and cause it to precipitate with rain or snow, or change any kind of precipitation, you have to get a license from the Department of Agriculture.”

Rules governing weather modification in Oregon were developed in the 1950s and 60s for cloud seeding in the central and eastern parts of the state, Nusbaum said.

Under state statute 558.210, an area along the Columbia River with a population of less than 21,000 can form a weather modification district, which is what leads Nusbaum to think that the rules were created for dry land farming in that part of Oregon.

For Oannes’ application, he said, “we’re doing our best, having not issued one of these for 50 years, to do a fair process for public comment and to reviewing his application.”

Jenkins and his colleagues at Oannes initially considered siting the coastal Aquaelicium device in Newport, Oregon, but it was too far north. He considered the Central Oregon coast, but knew its sand dunes are protected and “there were going to be too many issues.”

Oannes representatives chose Curry County because the company could then use the wind to move the clouds its device creates inland, Jenkins said.

In addition to using weather instruments, Oannes have “pre-reserved” satellites to monitor the changes in weather the Aquaelicium devices create, Jenkins said. They are also working with the National Oceanic and Atmospheric Administration and “all federal agencies that have a say on this when it comes to weather,” he said.

Once Oannes get through the permitting process, the device can be installed within three months, Jenkins said. He anticipates getting complete approval within five to six months. The model he anticipates installing is Oannes’ Model A Aquaelicium device, which can generate 48 million gallons per hour.

This model costs about $21 million and has an annual maintenance cost of $300,000, according to the company’s brochure.

“Curry County couldn’t pay for this machine,” Jenkins said. “I don’t want to put people in the position where they have to owe me money. I look at it in the long term. If I can help you make money, then you eventually wind up being able to pay me.”

Meanwhile, he noted, Klamath County in Eastern Oregon is “starving for water.”

According to the U.S. Drought Monitor, much of Klamath County is experiencing extreme drought. 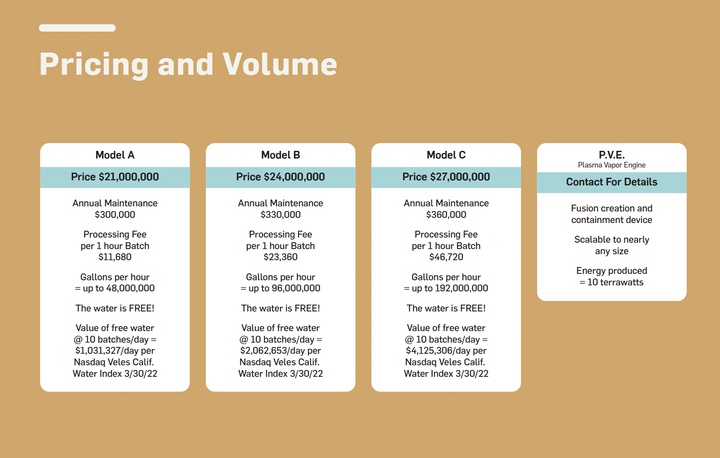 The U.S. Bureau of Reclamation, which manages the Klamath Water Project, stated last week that the project is out of water and ordered a shutdown. The Klamath Irrigation District, which is part of the project, plans to defy that order and continue operating a canal that provides irrigates about 191 square miles, Oregon Public Broadcasting reported Tuesday.

Despite the hardships Oregonians to the east are experiencing, Curry County residents were skeptical about Jenkins and his company’s device. Most at Monday’s hearing said the public notice Jenkins ran in the Curry Coastal Pilot and Del Norte Triplicate two weeks ago provided no information about his company.

Some thought Oannes intended to use nuclear energy to power its Aquaelicium device.

One man, Walter Murray, pointed out that rain isn’t a problem for Curry County, which gets about 60 inches per year. He asked why the collected water couldn’t be put in Lake Mead or another reservoir so it could be put to human use.

“This makes us feel like guinea pigs,” Murray said. “We’re a little podunk county with not much resources to fight this, ‘We’ll come here and test the product to see if it works or not.’”

Another man, Brookings resident, Zachary Chapman, asked Jenkins about the funding for his company’s project. He also asked how tribal communities on the coast would be impacted by the device’s installation.

Curry County Planning Director Becky Crockett said her department doesn’t have any information about Oannes’ and its Aquaelicium device that convinces her of its beneficial use. She said she would appreciate if Jenkins made a presentation to the Curry County Board of Commissioners and “specifically outline what the project is so we can make a determination as to what the impacts would be on the citizens of Curry County.”

California resident Michael Mugridge, who took part in the public hearing virtually, said Curry County residents may have enough water, but Klamath County residents have to truck in water to “keep it from dying.”

“The point is we are all a community in the United States and everybody needs to share,” Mugridge said. “If you have an actual machine that produces clean water, that’s looked at with serious intent, it will do nothing but encourage responsible growth of industry, responsible growth of communities and it will allow Oregon to have a product other than timber it can export to areas of the country that aren’t as fortunate.”

“They’re used to the norm,” he said, adding that they put Oannes into the same category as a “normal business.” “They don’t know what it’s going to do for them and they didn’t seem to want to ask.”