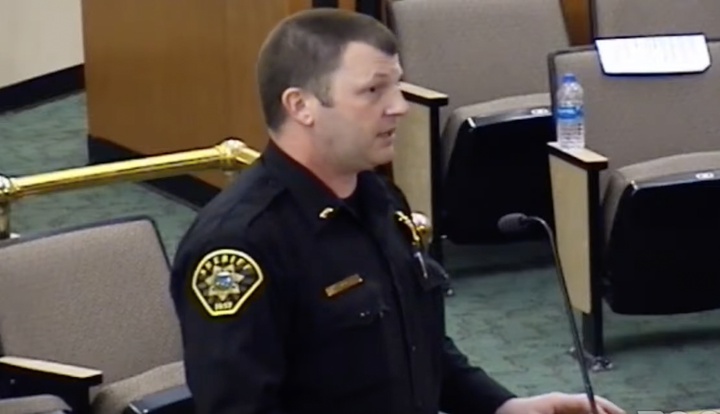 Daniel Schneck, opeations lieutenant at the Del Norte County Sheriff's Office, addresses the Board of Supervisors on March 22.

• Is Garrett Scott the Familiar Fresh Face the DNSO Needs to Right Its Staffing, Image Problems?

In the 17 years Lt. Daniel Schneck has been with the Del Norte County Sheriff’s Office, he says he’s never seen patrol staff as low as it has been recently.

When he appeared before the Del Norte County Board of Supervisors last month, Schneck said the ability to provide 24-hour patrol would suffer if a proposed repeal of Measure R, the county’s 1 percent sales tax measure, was successful.

But, according to Schneck, it’s already a struggle to provide 24-hour law enforcement coverage in Del Norte County. He said he only has two deputies to cover the entire county during the day and at night. With 14 open positions out of a total of 26, if a deputy goes out on long-term leave due to an injury, Schneck said he would have to implement “modified shifts.”

“This is probably the worst I’ve ever seen it,” he told the Wild Rivers Outpost, referring to the level of patrol staff at the DNSO. “We’ve always been short on patrol, but we’ve always had two boating deputies we could pull from or our investigations unit had a sergeant and seven deputies assigned. All of that stuff now is gone.”

Schneck sat down with the Outpost a week after county supervisors on March 22 formally accepted the resignation of his boss, Randy Waltz, who faces voter fraud and election fraud charges in connection with his run to continue as Del Norte County Sheriff.

As operations lieutenant — currently the highest ranking officer at the DNSO — Schneck has taken on the sheriff’s administrative duties and will be responsible for them until Garrett Scott, the sole remaining candidate for the position, is elected on June 7.

Schneck has been with the Del Norte County Sheriff’s Office since 2005, serving under former sheriffs James Maready, Dean Wilson and Erik Apperson. Originally from Redding, Schneck said he came to Del Norte for the job, met someone, had three kids and stayed.
Schneck says he has a few years left and doesn’t intend to go anywhere else until he retires. He also says he has no political aspersions beyond, maybe, undersheriff.

“I’m not a politician,” Schneck told the Outpost.

According to Schneck, Waltz was good to work for. Though he didn’t have many local connections, Waltz used his expertise and position as chair for the California Peace Officers Standards in Training program to bring classes to Del Norte, Schneck said.

“Like our 80-hour supervisory course,” Schneck told the Outpost. “That we would never have gotten in the past, but he just did. He had a lot of irons in the fire to make this place better and to further us and also train us. Unfortunately that didn’t get implemented because of staffing.”

Waltz was also working with other Northern California sheriffs to turn the Butte County Jail into a reception center for inmates being processed into the California Department of Corrections and Rehabilitation.

According to Schneck, Del Norte County prisoners had been sent to the reception center at San Quentin State Prison until the COVID-19 pandemic. Now, he said, Del Norte prisoners are processed into CDCR at North Kern State Prison, about a 12 hour drive away.

Schneck said the charges the Del Norte County District Attorney filed against Waltz shocked and surprised everyone at the DNSO.

“That was out of left field,” he told the Outpost. “When I came to work that morning, that was the furthest thing from my mind.”

Over the years, in addition to staff fluctuations, the sheriff’s office has lost funding in the form of grants due to several bills being approved at the state level.

Schneck mentioned the Safe Schools Act that made possession of methamphetamine a misdemeanor instead of a felony and resulted in the DNSO having to cut positions dedicated to methamphetamine enforcement.

More recently, some of the DNSO’s most experienced officers have retired and the agency is now competing with Humboldt County, Brookings and even the Crescent City Police Department when it comes to hiring new deputies.

Voter approval of Measure R in 2020 allowed the Del Norte County Sheriff’s Employees Association to negotiate 11 percent raises for deputies. Schneck said this allowed pay for sheriff’s deputies to be comparable with the Crescent City Police Department. But approval of Measure S in Crescent City allowed CCPD to implement $10,000 hiring bonuses for lateral recruits and the DNSO is still lagging behind.

The Del Norte County Sheriff’s Employees Association will have to negotiate for further pay increases and hiring bonuses, Schneck said. But in order to get that 11 percent raise for DNSO deputies, the county asked the association to wait before renegotiating their contract, he said.

“They offered us the money, but they wanted to push the contract back a year,” Schneck said. “We, the association, agreed to that.”

Del Norte County Sheriff’s Employees Association members had already been operating under a memorandum of understanding with the county that included 7 percent raises when voters approved Measure R in 2020, according to County Administrative Officer Neal Lopez.

Following the success of Measure R, county supervisors negotiated the 11 percent wage increase with the sheriff’s employees association to address the pay disparity between the DNSO and other law enforcement agencies in the region, according to Lopez.

“Bargaining is a give and take,” he said. “We stepped up and committed to this (11 percent) in the middle of a contract. An MOU has to be agreeable to both sides and the Board (of Supervisors) agreed to open it up and provided 11 percent increases. This is our give. What we want is that additional year in this contract.”

According to Lopez, the cost of operating the Del Norte County Sheriff’s Office, including the jail, is about $10.4 million for fiscal year 2021-22. Of that, about $4.2 million comes from the county’s general fund, which consists of property tax, sales tax and tobacco tax revenue, Lopez said.

Overall, law enforcement and public safety account for about 60 percent of the county’s annual production, Lopez said. This includes Del Norte County probation, the District Attorney’s Office, the public defenders office as well as the sheriff’s office and the jail, he said.

The initial budget for Measure R called for $760,000 to be allocated to the sheriff’s office, Lopez said. In addition to 11 percent raises for deputies, correctional officers received an 8 percent wage increase and miscellaneous employees who are also part of the Sheriff’s Employees Association received a 3.5 percent raise, he said.

Despite that 18 percent wage increase for sworn positions, Lopez acknowledges the DNSO’s inability to compete with other law enforcement agencies in the region.

Measure R dollars are also needed to bolster other programs and departments. Animal Control, for example, has been inundated with calls for nuisance or neglected animals, Lopez said. The Office of Emergency Services has historically only had one operating position.

Measure R dollars may also be earmarked for improvements to the Veterans Memorial Hall, which houses the county’s veterans services department, Lopez said.

Much like Crescent City’s Measure S — a similar voter-approved 1 percent sales tax measure — Measure R is generating more revenue than initially anticipated. According to Lopez, county staff had projected the tax to generate $1.2 million annually. In the measure’s first year, the county has already received more than $900,000 in sales tax revenue, according to Lopez. Measure R is now projected to generate $1.6 million to $1.8 million.

The Board of Supervisors and county auditor-controller have created a separate account for Measure R to allow for easier oversight, according to Lopez.

A proposed repeal of Measure R spearheaded by the Crescent City-Del Norte County Taxpayers Association could affect positions that have already been filled and others the county is still hiring for such as the animal services supervisor, Lopez said.

The proposed repeal went before the Board of Supervisors on March 8, its proponents seeking to have the initiative placed on the June 7 ballot. County supervisors, however, called upon staff to provide reports on how a Measure R repeal would impact county programs, delaying the repeal vote until November.

Lopez said he would give a report to county supervisors on the impacts of Measure R on Tuesday.

According to Schneck, the DNSO is already one of the lowest paid sheriff’s offices in California.

“If we were to lose Measure R, why would anybody stay here?” Schneck said.

Schneck also spoke to statements made by the author of the petition to repeal Measure R, Linda Sutter, that his salary and benefits total $222,546, according to Transparent California.
While true, the information Transparent California doesn’t include, Schneck says, is the hours he’s worked. He typically works 70 hours a week, covering for patrol and dispatch. Schneck said there have also been weeks where he’s clocked 100 hours at work.

“There isn’t a deputy that isn’t being forced to work overtime,” he said.

When asked if he’s spoken with Scott, the de-facto incoming sheriff, Schneck said no. He said he did’t want to get himself or Scott in trouble by speaking with him before he is elected sheriff. But Schneck said he has worked with Scott when he was a deputy and Scott was a Crescent City Police officer.

“He’s got a very strong work ethic and I think he’ll do this office a lot of good,” Schneck said of Scott. “I don’t think he’s going to have any crazy left field ideas, but I think he will come in here and he’ll be an addition to the sheriff’s department.”