« Man Dies After Being Swept Off the Jetty in Crescent City, Police Say 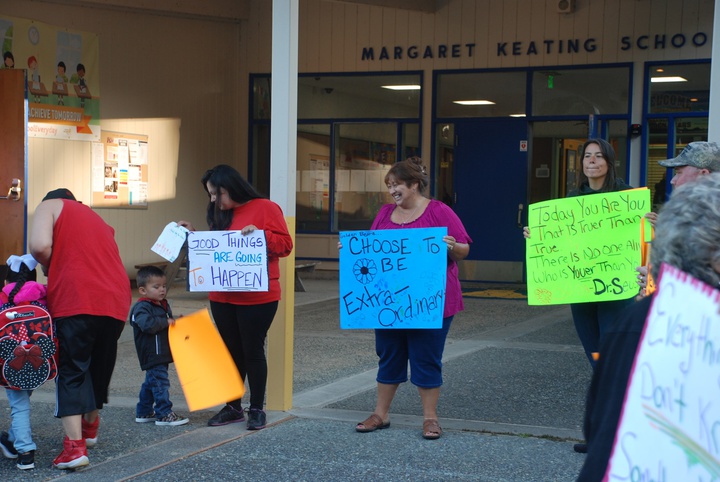 Parents, grandparents and staff at Margaret Keating Elementary School welcome kids to their first day on campus back in 2019. File Photo: Jessica Andrews

Though the Yurok Tribe was the lead agency, 17 other community partners worked together to obtain a $30 million federal grant dedicated to building a “cradle-school-career pathway project” in Del Norte County.

Those partners include Del Norte Unified School District and the County Office of Education, the Del Norte Child Care Council, First 5 Del Norte and the College of the Redwoods, according to the Yurok Tribe’s education director, Jim McQuillen.

“It was a true partnership,” McQuillen told county supervisors on Tuesday. “I’m pleased and tickled we were able to do this in such a short turnaround.”

“It’s inspiring to see folks across the region come together under the goal of improving students’ lives to secure this grant,” Huffman said in a written statement. “Del Norte County is one of the most economically disadvantaged regions in my district, but with this funding we can ensure children are healthy, have the tools they need for a successful education and can go on to have fulfilling careers to support themselves, their communities and tribes.”

The Klamath River Promise Neighborhood was one community specified as part of the grant’s larger scope, according to Terry Supahan, executive director of True North Organizing Network, one of the 17 partners working with the Yurok Tribe.

“The grant won’t officially start until late January of 2022, so we’re using this time from the announcement a few days ago to reconnect with all community partners and start to put a working team together,” Supahan told the Wild Rivers Outpost.

According to Supahan, the community partners working on the grant application built upon the California Endowment’s Building Healthy Communities Initiative to demonstrate that Del Norte County has academic, social and economic needs.

During the grant’s first year, the goal is to have community partners and “interested community members” participate in a planning process to identify the goals and objectives they hope to accomplish over the grant’s remaining four years, Supahan said.

The Yurok Tribe, True North and its partners will also work with the University of Washington’s Communities that Care program to help track their progress during the five-year program, Supahan said.

“The Yurok Tribe is not only the lead applicant, but it's the backbone agency that’s working with us and the school district and county around opportunities for all students,” Supahan said. “One of the more exciting aspects to me is there's funding in there to assist First 5 and the Child Care Council and other daycare providers to enhance opportunities for children before they even get in the public school system.”

“When it comes to our children; when it comes to the health of our community, that’s absolutely a place where our goals and focus align 100 percent,” he said. “We hope to continue to build this relationship and we continue to look for areas where we do find common ground. It’s important we work together for things that matter the most, our children.”

According to Myers, the Yurok Tribe will hold a press conference in October to provide further information about the Promise Neighborhood Grant program.