« Santa's Workshop Is Coming To Town; Keep An Eye Out For Giving Trees 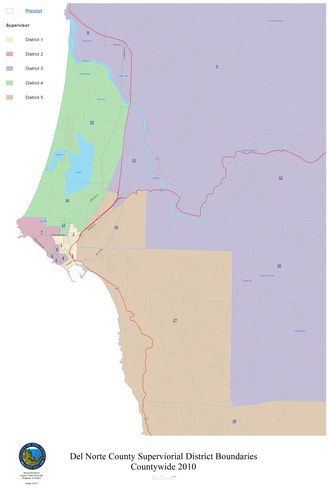 • Draft Maps With New District Boundaries Released to the Public, Will Go Before Board of Supervisors Next Week

Despite unofficially rejecting one potential option out of four for new supervisorial district boundaries in Del Norte County, the Board of Supervisors will seek public comment a second time on Wednesday before making a final decision next month.

A special meeting will be held at 11 a.m. Wednesday at the Flynn Center or online via Zoom.

Using 2020 Census data, this will be the first time in at least 20 years that district boundaries will change, Luna said. Supervisors must adopt a final map by Dec. 15, she said.

“If we adopt on (Dec.) 14th, which we have to, we’ll need to republish any changed maps as new draft maps at least seven days beforehand,” Luna said.

On Nov. 9, county supervisors and most members of the public favored “Alternative 1” as being the most consistent with current district boundaries. However, some members of the Advisory Redistricting Commission wanted to see an option that had the Crescent City limits within its own district.

According to Luna, this would be in keeping with California Elections Code 21500, which asks supervisors to respect the geographic integrity of a city or census designated place. While three out of the four maps up for consideration do that, Luna said, they make larger changes to existing boundary lines.

One of those maps, Alternative 3, has District 5 encompassing Klamath, Smith River, Hiouchi and Gasquet — an option District 4 Supervisor Gerry Hemmingsen wanted to eliminate right off the bat.

“That’s just not going to work for one supervisor to take all of those unincorporated cities,” he said.

Another component of the discussion had to do with current elected officials representing specific districts. During public comment, Kevin Hendrick, who represents Supervisorial District 5 on the Del Norte County Democratic Central Committee, said all of the draft supervisorial maps places him in District 4 rather than his current residence in District 5.

In a letter to the Board of Supervisors on Nov. 9, Hendrick asked them to consider redrawing the district line back to its original boundary on Railroad Avenue, stating that would affect only about 12 voters.

“If you approve the change that moves me into District 4, I will lose my eligibility to serve as a representative for District 5,” Hendrick said. “I would, in effect, lose my elected position due to a realignment of the district borders. If moving me to a different district was intentional, this looks like political gerrymandering. If this was an honest oversight, this can easily be corrected. There are only about a dozen voters on Malone Road from Railroad to the end of Malone Road.”

Luna said Hendrick’s proposed solution wasn’t something that could be immediately remedied. Census blocks are oddly shaped, she said, and while they didn’t determine the number of registered voters in the block Hendrick was referring to, they did determine that 150 people over the age of 18 reside in that area.

Hemmingsen said the redrawn districts also places him outside of District 4. He noted that Alternative 3 — the draft map he wanted to eliminate — would “redistrict him out of his district.”

District 2 Supervisor Valerie Starkey, who had met with Luna prior to the Nov. 9 meeting to discuss redistricting, pointed out that California Elections Code 21500 also states that a community of interest doesn’t include relationships with political parties, incumbents or political candidates.

Luna noted that if an incumbent on the Board of Supervisors found themselves in a different district due to the redistricting process, he or she would finish out their term and could run for election to represent their new district.

“Whether that’s true for Mr. Hendricks, I don’t know,” she said. “I will say that having one person be moved out of their district is not an example of gerrymandering.”

Most members of the Advisory Redistricting Commission who spoke to the Board of Supervisors on Nov. 9 urged them to adopt the first alternative. However, Tamera Leighton, a Crescent City resident who lives in District 1, said she felt the city should be in one district.

“I think the way we interact with our community because we’re members of the City of Crescent City changes the way we function in our community,” Leighton said. “We have two public meetings to attend: We have the City Council meetings and the county Board of Supervisor meetings all representing us.”

Though the first map is different than current district boundaries, Karen Sanders, another member of the Advisory Redistricting Commission who lives in Del Norte County District 2, coined the old adage “if it’s not broke don’t fix it.”

“It gives two supervisors to oversee, or represent the city,” she said. “And two who also represent our wilderness and mountain areas, forests and so forth. It’s a good mix.”

The Del Norte County Board of Supervisors will meet at 11 a.m. Wednesday in the Flynn Center, 981 H Street in Crescent City. The public can also participate via Zoom.