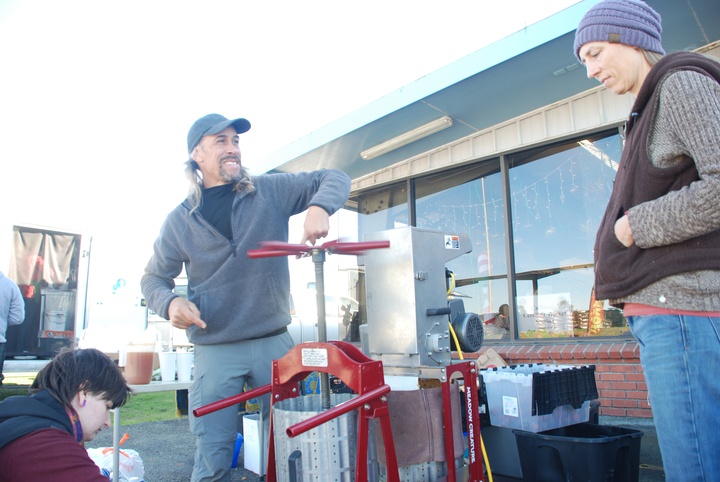 Ron Cole, of Gateway Education, presses apples at the Crescent City Farmers Market on Saturday. Youth participating in a new entrepreneurship program gathered the apples and sold the cider at the market. Photo: Jessica C. Andrews

Following a successful summer in a new venue, Rural Human Services will hold the Crescent City Farmers Market year-round with extended hours, a roof overhead and a special holiday schedule.

The nonprofit organization that operates the Saturday market from June through October moved from its long-time home at the Del Norte County Fairgrounds to the Crescent City Harbor last summer.

With the canopies visible from hotel windows in the area, people would travel over to port to check out the vendors, often coming early and staying after 1:30 p.m. even though the market was closed, Market Manager Angel Hanson told the Wild Rivers Outpost.

“The move has actually been fantastic,” she said. “People open up their hotel windows to check out, looking at the different color canopies below. One day we had over 2,000 people coming through that we calculated (had come) in cars.”

RHS received permission from the Crescent City Harbor District to reopen the market in the former Englund Marine building at 201 Citizens Dock Road.

After finishing out its regular season last month, it reopened on Nov. 13 with 10 vendors, according to Hanson. It was at maximum capacity on Saturday, she said.

“By then people will know we’re here,” Hanson said. “They can come in and do some last-minute Christmas shopping or pick up some bread or cookies for their holiday tables. As long as we’re indoors, we’re having a good time and (vendors) are making money, I don’t mind being here that long.”

The market will be closed for the Christmas and New Years holidays and will reopen Jan. 8.

There was smoked salmon and Alexandre Dairy products. Outside Juanita’s Mexican Food set up a food truck while Ron Cole, of Gateway Education of the Wild Rivers Coast, manned an apple press.

According to Cole, the apple press is part of a new youth entrepreneurship program called Wild Harvest Adventure. Youth in that program were each given $700 to invest in local wild foods.

This resulted in them gathering the apples for the cider patrons drank Saturday. One participant, Carl Evanow, caught and canned local tuna for sale.

“It grew from a desire to share my own experience of earning a living in a way that didn’t compromise how I wanted to experience my world,” Cole said in a statement posted on the building. “In the process of harvesting, processing, pricing upcycling, recycling, invoicing, delivering, tracking hours, going to business meetings and making decisions on pricing, inventory and logistics, they didn’t seem to be lost in visions of making lots of money. They do seem, however, to be very cognizant of, and motivated by, the opportunity to bring wild, healthy, wonderful food to their community.”

Other vendors come from as far away as Redding and Cave Junction, Hanson said.

One newcomer, Seaside Weavers, take old crab pots, clean them and turn them into floor mats. Hanson said anyone with fishing gear or rope they can’t use should visit the market to see if that material can be reused.

Hanson said she will submit another proposal to the Crescent City Harbor District Board of Commissioners at its Dec. 7 meeting to keep the indoor market open through May when the market returns outdoors for summer.

“We’re talking about for next year also doing an evening market on Mondays, and doing a separate section with food vendors and a regular section for the farmers market,” she said. “We want to have outdoor live music and dining outdoors.”