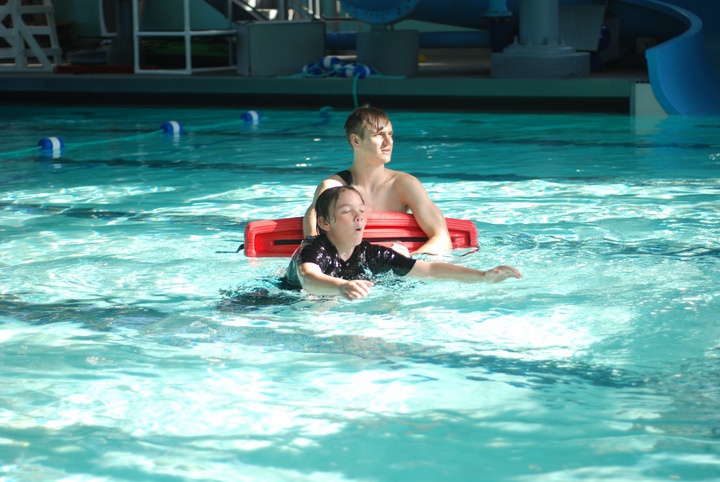 In pre-COVID days, Colton Strnad was one of the lifegaurds at the Fred Endert Municipal Pool. File photo: Jessica Cejnar

At odds over a proposed new fee schedule for the swimming pool, Crescent City Councilors told staff to gauge patrons’ opinions on any potential rate increases.

Mayor Jason Greenough, saying he was looking out for taxpayers, especially after they passed Measure S, also asked staff to speak with Del Norte County to determine whether it could help keep the pool sustainable when it it’s able to reopen.

“It just seems like we should look into other options before we raise rates,” he said Monday. “I think we should definitely keep the schedule, but for me it’s real difficult to vote for an increase in rates since the people of Crescent City have already been paying for this facility.”

The Fred Endert Municipal Pool opened to swim lessons on April 12. Staff don’t yet know when lap swims, water aerobics, physical therapy and other activities can resume at the swimming pool. Recreation Director Holly Wendt said staff and a pool stakeholder group used the pandemic to review how to make sure the pool is sustainable when COVID-19 restrictions are relaxed.

That stakeholder group, including members of the Coast Masters Swim Club, the Crescent City Swim Team’s parents and coaches, and lifelong swimmers, assessed a 10-year masterplan prepared in 2019 by aquatics consultant Counsilman-Hunsaker. According to that masterplan, the pool’s sustainability was challenged by minimum wage increases to $15 per hour by 2022.

If the Council approved the rate structure as it was presented on Monday, staff anticipated gaining about $21,000 a year in revenue, City Manager Eric Wier said. Increased minimum wage has cost the city about $24,000, he said.

The city last updated the pool’s fee schedule in the 2017-18 fiscal year, raising daily passages by 50 cents and swim lessons by about $2, Wier said.

“This is keeping up with ongoing costs,” he said. “It doesn’t compare with the rest of the costs we’re seeing.”

The pool’s new proposed fee schedule calls for changing the youth designation to serve ages 7 to 17 for a day-use fee of $4, which is less than the current $5 rate, according to Wendt. The day-use rate for seniors would remain $5, while the day-use fee for adults would increase from $5.50 to $6, she said.

The new fee schedule calls for implementing 10-punch passes with a cost covering nine visits with the 10th visit free. For example, a youth 10-punch pass would cost a proposed $36, seniors would pay $45 for a 10-punch pass and adults would pay $54, according to Wendt’s presentation.

This change would increase revenue by about $2,000, she said.
These proposed changes would make the day-use and 10-punch passes more than Brookings, which has a seasonal outdoor pool, and less than Arcata and Mendocino, Wendt noted.

Crescent City’s proposed rate structure also calls for a monthly pass for adults, something that’s new, which is less than Mendocino and Arcata’s facilities, she said.

The rate structure also calls for increasing the yearly fee for adults from $525 to $540, according to Wendt.

“That yearly rate is nine months with three months for free,” she said. “The yearly rate is already a discount to our patrons and our community. Adding on the additional sale price was hurting our pool at a cost of about $6,000 per year.”

The pool stakeholder group also proposed increasing the price for swim lessons due to its staffing requirements, Wendt said. The new rate structure called for increasing individual 25-30 minute lessons from $15 to $20 and 55-60 minute individual lessons from $27 to $35.

The proposed cost for babies and tots swim lessons went from $33 to $35 with individual classes increasing from $5.50 to $5.83, according to Wendt.

There are also proposed fee increases for renting the slide, Wendt said.

“Historically it was $30,” she said. “It requires two staff to man the slide whenever it’s used — one on the top and one on the bottom — so, assessing that we’d like to raise that to $50 per hour of rental.”

The new fee structure also calls for increasing lifeguard training from $100 to $250, Wendt said, adding that the industry standard is between $250 and $300.

Councilor Beau Smith asked if there were scholarship or some other assistance opportunities to help families with the cost of swim lessons.

Wier said the city may receive a donation from the California Assistance League to help with swim lessons.

The city has also met with Silver Sneakers and other organizations that help senior citizens with monthly fitness and wellness costs, Wendt said.

Crescent City is also working on a marketing plan for the pool, which could include sweatshirts and stickers, Wendt said. The pool’s also in need of a new logo, she said.

Though Greenough was loathe to approve fee increases, Mayor Pro Tem Blake Inscore said he thought it was time to go ahead with the raising rates, especially before the pool is completely open.

“No it’s not an easy thing to raise rates, but it does feel like the right fiscal thing to do and it feels like the right time to do it as opposed to being open and being open for a year and then all of a sudden changing everything,” he said.

The Council’s newest member, Ray Altman, said even though Measure S does generate revenue for the swimming pool, it’s still operating at a deficit. He said he didn’t want to raise rates either, but the pool is expensive to operate.

Councilor Isaiah Wright said that if his colleagues choose not to implement some of the rate increases, he felt the fee for using the slide should increase.

“I feel like we’re losing our shirt on that a little bit,” he said.

Greenough said since having the slide open requires two lifeguards, increasing the fee made sense.

Inscore said he liked the structure presented by staff and disagreed with a piecemeal approach to the fee schedule. He called for a scholarship program that could help with parents and seniors who may not be able to pay the extra cost.