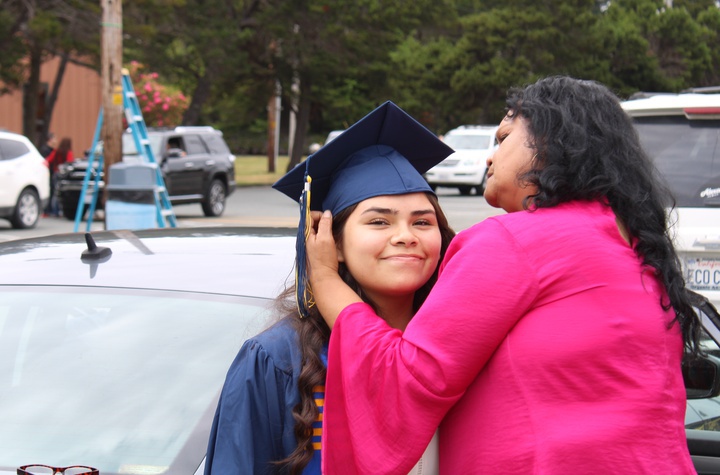 The latter ceremony will come the day after California is expected fully reopen its economy after more than a year of restrictions due to the COVID-19 pandemic, according to Del Norte Unified School District Superintendent Jeff Harris.

Harris said after receiving the news last month that the Blueprint for a Safer Economy is expected to sunset June 15, he spoke with Public Health Officer Dr. Warren Rehwaldt whether the district can plan for a regular outdoor high school graduation.

“His response was, ‘I don’t see why not,’” Harris told DNUSD trustees, referring to Rehwaldt. “There isn’t anything coming from the state that would prevent it.”

Since June 16 is a week later than the original graduation date of June 11, Del Norte High School administrators sent a survey to seniors and their families to find out which they would support, DNHS Principal Alison Eckart said.

Of the students surveyed — Eckart said about half of them responded — more than 90 percent voted to delay graduation so they could attend in person with their friends and family. About 5 percent voted to keep the June 11 date due to safety concerns or because they had trips or other activities scheduled for June 16, Eckart said.

Though she said she understood most seniors’ wishes to graduate with their friends and family watching and supporting them, Eckart said she wanted to accommodate everyone.

“We certainly don’t want to take a graduation away from someone this year,” she said. “This is a very heart-felt emotional moment. For some of these kids, this is the first time in their family that someone is graduating from high school, and when we take the depth of that idea, I certainly didn’t want to prohibit graduation if kids did indeed have plans. If they were headed to the military, the plan with June 16 would be challenging.”

Eckart said she also held two meetings with parents of seniors, most of whom urged her to delay the ceremony until June 16.

Though she agreed with her colleagues that holding two graduation ceremonies would be a feasible option, Trustee Area 4 representative, Charlaine Mazzei said she felt June 15 as the date when the California economy would reopen was an arbitrary date.

“I want to do what’s safe, I don’t want to do what the state says is OK because they don’t want to worry about people gathering and all that,” Mazzei said. “So, if it’s not safe to gather people together on the 11th, it’s very unlikely that it’s going to be safe to gather them together on the 16th. What are we doing to address the reality of how safe it is to gather people together? Not just what the state says, but the actual how safe is it?”

Harris said he and other county superintendents in the state also questioned the logic behind the June 15 date. According to Harris, most high schools have had their graduation ceremonies by June 15, so concerns about crowds and mass gatherings wouldn’t be a worry.

“On Wednesday, the 16th (of June), when the Blueprint for a Safer Economy is gone, businesses open, restaurants open, gyms open, city pools open and summer schools open, and all of that stuff is as if we were in pre-pandemic conditions,” Harris said. “So, Charlaine, when you talk about what’s safe and what’s not, respectfully I would submit that our role is to follow state requirements and guidance and provide that option, just like we’re providing the option next year for virtual or independent study even though the state will not require it.”

Harris said because DNUSD wouldn’t be violating state requirements or safety guidance, it would not be financially liable if something goes wrong.

Trustee Area 5 representative, Jamie Forkner, who has a graduating senior at Del Norte High, said she felt that holding two graduations would give students and their families the option of choosing what they were comfortable with.

Trustee Area 1 representative, Don McArthur, said he felt it would be safe to have an in-person graduation ceremony at Mike Whalen Field on June 11 and on the 16th, “based on everything he’s reading about outdoor transmission.”

“The state is drawing an arbitrary deadline, given that it’s going to be breezy, it’s going to be cold, and I think we could pack ‘em in like sardines and we’d still be pretty safe,” he said. “Not that I’m advocating for that.”

The Public Health Branch is holding two vaccine clinic for youth ages 12 and older, Harris said, noting that the Pfizer vaccine had recently been approved for pre-teens. That clinic will be held from 9 a.m.-1 p.m. Saturday at Smith River School.

The next vaccination clinic will be held from 3:30 p.m.-6:30 p.m. Tuesday at the Del Norte County Fairgrounds. A parent or guardian must be present and no appointment is necessary, Harris said.