Curry County Board of Commissioners Approves New Litter Patrol Contract That Will Save Taxpayers More Than $10,000 » 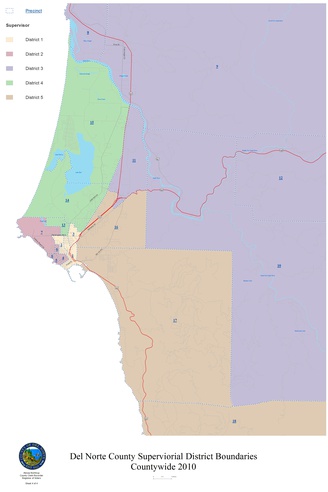 Though the needed census data won’t be available until September, Del Norte County supervisors received their first taste of the redistricting process Tuesday.

Required under the U.S. Constitution’s Equal Protection Clause, the Board of Supervisors will look at the county population as of the 2020 Census and redraw supervisor district lines to ensure each is equally represented, Assistant County Counsel Autumn Luna said.

The nine-month process must include at least four public hearings and the creation of a website to act as a repository for information gathered during the process, Luna said. Supervisors may also want to form an advisory or independent commission to make recommendations to the Board, she said.

“A lot can changed in a 10-year time period and indeed a lot has changed since redistricting last happened in 2011,” Luna said.

Following the 2010 Census, Del Norte County’s population was 25,142. With five supervisor districts, according to Luna, each should have had about 5,000 people in it.

“You can see here, some of the districts have a little bit more, some a little bit less,” she said. “The goal is to keep this at 5 percent from the median — 10 percent total. The mathematicians out there will see that District 5 and District 2 were more than 10 percent past that in 2010. We don’t know what that looks like now but certainly those two districts, we want to make sure we get them as close as possible.”

According to Luna, since the COVID-19 delayed the 2020 Census, that data won’t be available to Del Norte County until Sept. 30, giving the county until Dec. 15 to adopt the redrawn boundaries. In previous years, that Census data would be available in March and the redistricting deadline would have been Nov. 1.

Though the Legislature is working on “a couple of fixes” to extend the deadline, Luna advised county supervisors to stick to Dec. 15 to avoid bumping up against the 2022 election.

During the redistricting process, county supervisors also have to ensure the public has a chance to weigh in. At least four public hearings must be held during the process, including one that urges those who work Monday-Friday to participate, Luna said. She advised creating the website and doing public outreach on the redistricting process in May or June and holding the first public hearing.

Public hearings can also be held after the Census data is out in September, she said.

The U.S. Department of Housing and Urban Development notified jurisdictions in February that $30 million was available in CDBG dollars, according to Administrative Analyst Toni Self. When applying on behalf of public services, the total grant application can’t exceed $500,000, she said.

If Del Norte County’s application is approved, CASA and the Senior Nutrition Program will receive $250,000 each, Self said. Applications are due to the state Department of Housing and Community Development by April 30.