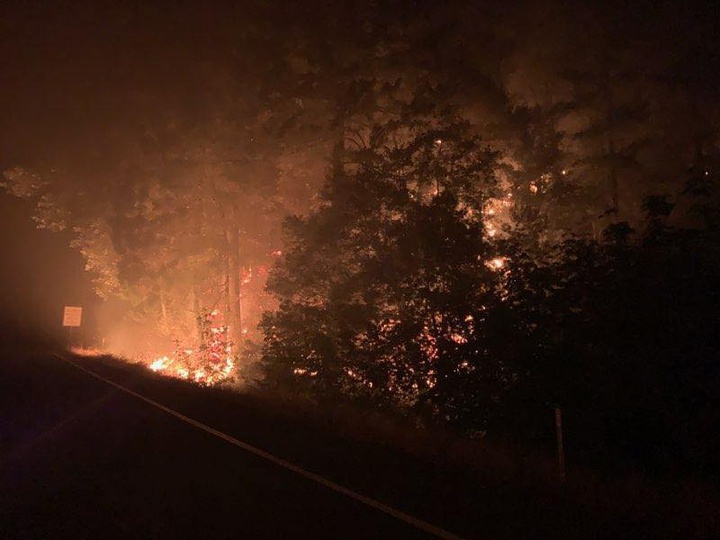 The Slater Fire charred parts of Del Norte County, including the area around the Idlewild Caltrans station. Photo courtesy of Caltrans District 1.

And while the Gasquet Ranger District is ready, having brought their seasonal fire crews back two months ago, officials already anticipate a year of scarce resources, Fire Management Officer Duane Franklin told the Del Norte County Board of Supervisors on Tuesday.

“In a normal year we’d have two fire engines seven days a week. We’d have one water tender, three patrols, a hotshot crew and a lookout,” Franklin said. “This year we’re looking at having one fire engine, no water tender and only two patrols.”

The positions are available, but with increases in the minimum wage, people are leaving the National Forest Service and taking jobs elsewhere, Franklin said. Gasquet will have one fire engine available to respond to any wild land blazes, but the hot shot crew is a national resource that can respond to other areas at a moment’s notice, he said.

Franklin and Gasquet District Ranger Jeff Marszal gave county supervisors an idea of what to expect this fire season. Their presentation comes ahead of a public meeting from 9 a.m.-11 a.m. June 29, according to Marszal.

Franklin noted that vegetation in the Smith River NRA has dried out, river levels have reached lows normally seen in August and local conditions are what they’d normally be in mid-July.

“People were surprised that a fire did that late in the evening,” he said. “Last week, Hoopa had a fire that was six acres. We were able to get people there quickly and suppress that fire.”

“(During) the Slater Fire we focused a lot on protecting the tunnel, the highway and PPL transmission line, recognizing its critical importance to the community,” Marszal said. “On the NRA, there are also cultural and ecological values that are important to us and the community. We’re blessed with rich natural and cultural resources and biodiversity.”

Marszal also gave a recap of the 2020 fire season, which included the Slater Fire. Starting on Sept. 8 near Happy Camp, the Slater Fire burned more than 150,000 acres, spreading into Del Norte County and Oregon. Two people lost their lives and more than 250 homes were destroyed, Marszal said.

“Most were destroyed in Happy Camp, though we did lose a few in Del Norte County,” he said. “It burned approximately 4,500 acres on the Smith River NRA.”

Beginning July 8, personnel will be treating about 86 acres along three miles of road on Forest Service Route 18N11 and anticipate selling 1 million board feet of timber.

According to Marszal, that timber will be sold through a stewardship contract with the Mule Deer Foundation.