Do You Feel More Like Redding or San Rafael? The California Citizens Redistricting Commission Wants to Know » 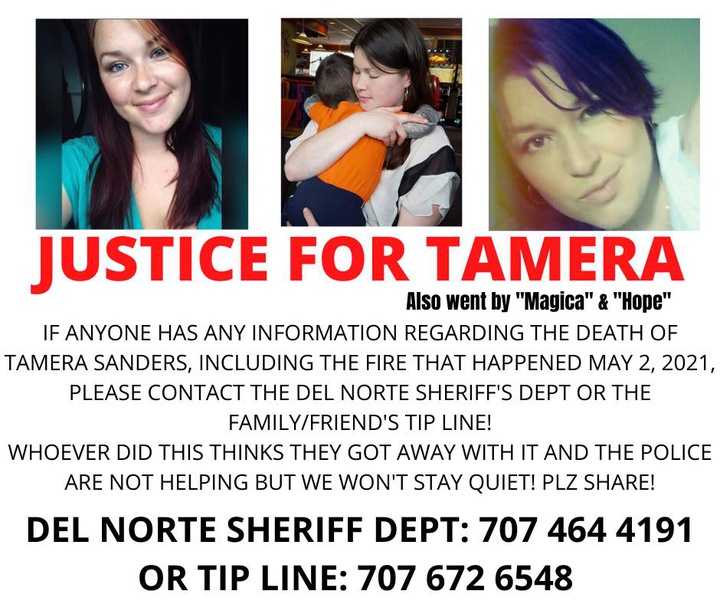 This flier, posted on the Facebook page "Creeps of Crescent City," calls for answers into the death of Tamera Sanders.

Del Norte County Sheriff’s deputies have confirmed the identity of a Crescent City woman whose body was found inside a barn that burned down near Howland Hill Road and Bertsch Avenue on May 2.

Deputies are investigating the death of Tamera Sanders, 29, as suspicious “until we know otherwise,” Undersheriff Randy Waltz told the Wild Rivers Outpost on Tuesday. The cause of death is undetermined, he said.

According to Waltz, the fire took place at about 11:06 p.m. on May 2. The sheriff’s office was called to the scene for a death investigation May 4.

“At the time the call came in, they reported that it was fully engulfed and that it moved very quickly,” Waltz said. “Calfire has that fire investigation and we, of course, have the death investigation, which is kind of running parallel.”

CalFire is assisting DNSO in its investigation because of the fatality, a representative told the Outpost.

Firefighters on the scene couldn’t get inside the barn to determine where the fire originated, Crescent Fire and Rescue Chief Bill Gillespie said.

The first unit arriving on scene reported heavy fire conditions and said it would be a “large incident,” Gillespie said.

“Our duty officer that was responding in, he said he could see from Howland Hill and Elk Valley Road a very large glow and a column into the sky,” Gillespie told the Outpost. “He got up there and essentially the entire building, it looked like to them, (was) on fire.”

Gillespie, reading from the incident report, said the overall building footprint was roughly 120 by 120 feet. Because of the structure’s metal roof and metal siding, however, firefighters had difficulty getting water into the building, Gillespie said.

“It was a situation where they had so much fire burning inside and the roof came down, overall, across most of the building,” he said. “There was no way to be able to put a crew anywhere in the interior to try to do a search or anything.”

Crews were on scene until about 3:05 a.m. May 3, Gillespie said. In addition to Crescent Fire and Rescue and CalFire, other responding agencies included the Pelican Bay Fire Department and the Fort Dick Volunteer Fire Department.

According to Gillespie, the building itself appeared to be used for storage. There were vehicles inside the barn, including a large forklift, he said, as well as automotive parts. A large stack of firewood was also inside the structure, Gillespie said.

During the incident, there was some concern about the fire spreading to sheds on an adjoining property about 30 to 40 feet away, Gillespie said. Firefighters were able to keep those structures from catching fire, he said.

There was also concern about adjacent power lines as well, but they escaped damage, according to Gillespie.

According to Gillespie, DNSO was also called to the scene during the incident.

“There was a report at the time of somebody thought they heard somebody in the direction of the fire screaming, so they brought the sheriff’s department in so they could collect a witness statement while we concentrated on actual fire suppression,” he said.

Sanders was a known figure to many Crescent City residents, particularly near Bess Maxwell and Joe Hamilton schools, who took to Facebook to complain about her prowling and stealing items off people’s porches.