Summer Meals for Kids are Served »

For Klamath Residents, Getting to McKinleyville, Arcata, Eureka is Easier Than Traveling to Crescent City 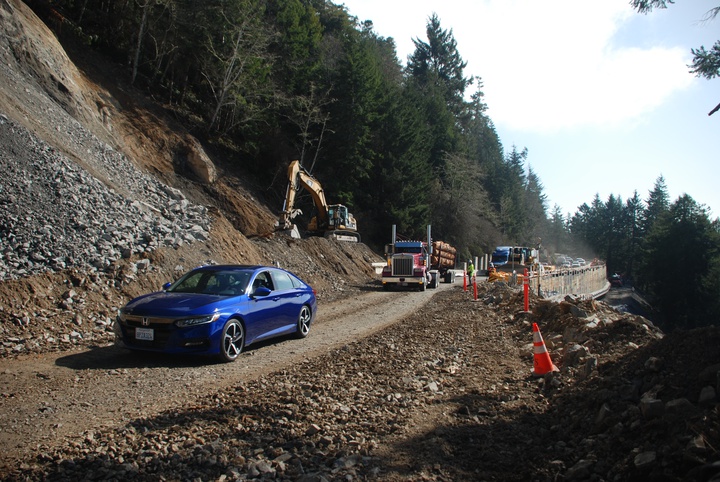 Many motorists are frustrated at having to wait two hours to continue up U.S. 101 through Last Chance Grade, but for Klamath residents, getting to Crescent City has become such an ordeal it’s easier to head south for groceries, health care, even work.

Debbie Perry, who works at a hotel in Crescent City, is often an hour late to her afternoon shifts because of the ongoing construction at Last Chance Grade. She’s also a driver with Door Dash, but operates out of Eureka.

“It’s just too hard to schedule Door Dash for busy times and the slide when I can just drive to Eureka,” she told the Wild Rivers Outpost on Tuesday.

Perry participated in a Facebook discussion on Tuesday started by Klamath Glen resident Chrystal Helton. Noting that many of her neighbors expressed frustration with how the delays have impacted their lives, she said she wanted to let the Del Norte County Board of Supervisors know.

During the discussion people described being separated from elderly family members, having to stay in Crescent City due to the need for medical treatments and arriving home from work too late to see their children.

Many say traveling to McKinleyville is easier and faster than braving Last Chance Grade. One woman said she’s opting to have her baby in Arcata because she doesn’t know what the road will be like in November.

Another said her father had died at his home last week and it took two hours for the Del Norte County Sheriff’s Office and local mortuary representatives to get to Klamath due to the construction at Last Chance Grade.

“The not knowing about the ability to collect supplies and connect with needed services in town is huge,” Perry said in a Facebook comment. “It comes down to lost wages if I’m on the Klamath side (and) what about hubby and the kids if I’m on the Crescent side. The not knowing if I’ll make it home everyday sucks. Not to mention the fear of the slide coming down while we’re passing through.”

Motorists have experienced two-hour delays weekdays on U.S. 101 south of Crescent City since rain brought a new landslide down onto road Feb. 13. Caltrans cleared the debris and reopened U.S. 101 to one-way traffic only to close it about three days later when slide activity resumed.

The road reopened during the day Feb. 22, but was shut down at night so heavy equipment could be brought into the area. The closure at Last Chance Grade prompted the Board of Supervisors to declare a state of emergency Feb. 23.

On Monday, Caltrans District 1 reported that crews are continuing to install cable netting to stabilize the hillside. Motorists can expect the road to be closed from 9 a.m.-11 a.m.; noon-2 p.m. and 3-5 p.m. Monday through Thursday and from 9 a.m.-11 a.m. and noon-2 p.m. on Fridays. Delays outside of those hours and during the weekend will be about 30 minutes, though emergency vehicles will be accommodated, according to Caltrans.

On Tuesday, Caltrans District 1 spokesman Myles Cochrane said crews have seen larger traffic volumes travel through the area, likely due to the start of tourist season.

“Our operations have not changed, but as we go along we are always actively looking for ways to accelerate our slide removal and prevention work and decrease the overall duration of the project,” he told the Outpost. “Our current operation is likely going to run into the fall.”

Cochrane urged the public to access Caltrans’ social media pages for updates, photos and video as “we battle the elements.”

Helton, who is a teacher at Pelican Bay State Prison, said she would go to town about once a week to hand out or receive assignments and work from her students. She said she doesn’t have much of a need to go to town, but many of her good friends are in Crescent City.

“It might not be much, but not being able to spend time with your people makes for a sh--ty few months,” she said.

With District 5 Supervisor Bob Berkowitz, who represents Klamath, missing meetings due to his health, Helton has reached out to his District 2 colleague Valerie Starkey, but said she hasn’t heard back.