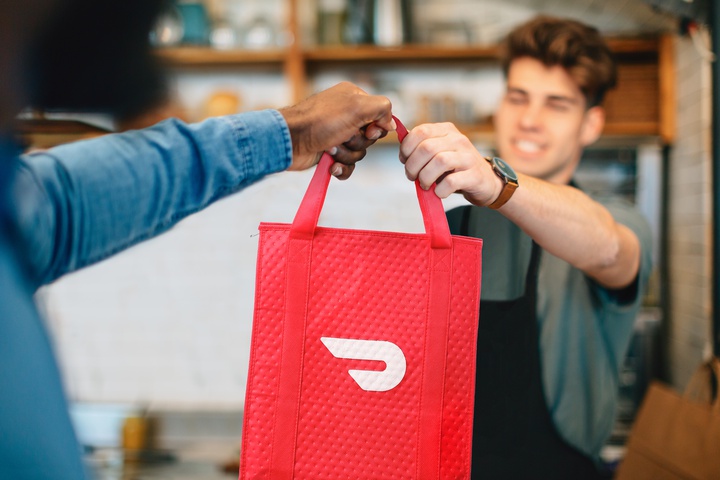 DoorDash became available in Del Norte County around February. One local Dasher said she's about one of roughly 200. Image courtesy of DoorDash

Kami Arnett chatted on the phone as she combed through Safeway’s meat section.

At 11:37 a.m. July 15, Arnett had been at the supermarket for about 15 minutes picking up an order of more than 20 items for a DoorDash client. She said she was searching for flank steak.

“People are ordering their groceries for the week or for two weeks,” Arnett told the Wild Rivers Outpost. “For those types of orders, they’re called shop and deliver, we essentially shop for the item. (The app) shows a list of what they want and pictures of what it is. We shop with it, check out with a card that is given to us by DoorDash and then we just take and deliver it. I know the store better for my own personal shopping.”

Arnett was a full-time medical assistant when she became a DoorDasher in mid-March. The digital-based delivery platform became available in Del Norte County around February, Arnett and other local Dashers say.

Arnett said she began Dashing to help her brother out, but grew to like the flexibility it gave her. What began as a way to earn extra cash so she could take her kids on trips has become her primary source of income.

Having quit her full-time job, Arnett said she likes being able to Dash anytime she wants.

“If my kids are having a bad day and I’m like, ‘OK, I want to stay home with them and give them some extra support, I can do that,” she said. “One of the things I really liked about it, and it’s kind of a trade secret, I’m using my knowledge of Crescent City. Of the locals that live here, I’m using my knowledge of the seasons, of when paydays are, to really get the most benefit for myself.”

Though a DoorDash spokesman couldn’t be more specific about how many drivers there are locally, Arnett said she’s heard that there are 200. She said she may run into six Dashers during a shift.

Arnett said her experience with the delivery service has been good, except with low employment at fast food and restaurants, the wait may be longer for orders.

“I’m always texting people saying your order’s going to be later than you expect,” Gamez said. “The only thing that is not the best is because they have to wait so long for their food, it’s probably cold by the time they get it.”

That’s probably the most challenging part of DoorDash, said Gamez, who signed up around February.

Del Norte County’s unemployment rate was 11.6 percent in June 2020, she said. In June 2021, Del Norte’s jobless rate decreased to 7.9 percent, Hernandez said, though it wasn’t where it was before the COVID-19 pandemic.

In a Facebook post on July 16, the Wild Rivers Outpost found people had mixed experiences with DoorDash. One woman said that it's great for people who don’t want to leave their home due to the pandemic and for those who don’t want to drive to get food.

One person said his household has used the service several times and when a restaurant makes a mistake on an order “DoorDash has always made things right.”

Another person said she’s had DoorDashers deliver food to her address even though she doesn’t use the service.

“It’s actually pretty frustrating,” she said. “They just left food on my porch last night that was not mine after I must have gone to bed. The wildlife trashed it and I had to clean it up.”

Founded in Palo Alto in 2013, DoorDash operates in more than 4,000 cities worldwide, reaching 85 percent of the U.S. population, according to the company. This includes Del Norte County, population 27,812, where it offers access to local restaurants and markets like Art’s Barbecue, Enoteca, SeaQuake Brewing and Fort Dick Market.

“When DoorDash was founded in 2013, we launched with a focus on providing suburban areas with access to the best of their neighborhood through online convenience,” a DoorDash spokesman told the Outpost via email Thursday. “We are proud to serve Del Norte County, furthering our mission of growing and empowering local economies and making our services as accessible as possible to customers across the country, beyond metropolitan areas.”

Fort Dick Market began working with DoorDash around Feb. 23, manager Simer Sohal said. He said the business he manages likes the arrangement — if someone places a DoorDash order for $10, the market receives $7 and DoorDash gets $3.

Most of the market’s DoorDash orders come from people who are new to the area, though regular customers are ordering on the phone too, Sohal said. In one month, Sohal said, Fort Dick Market made made about $10,000 and $11,000 through DoorDash orders.

“Nobody wants to come to the store to pick up food, they’ll order on DoorDash and deliver it at home,” he said. “In one day, we’ll get 30 orders, 45 orders, sometimes 10 to 15 orders, it depends on the time and people — what they want.”

Daniel Penny said he applied to be a Dasher right after he found out it was coming to Del Norte County in February. He says he’s taken about 718 orders since then and can make about $200 in a day.

He even wears a uniform, purchased through DoorDash, and stuck a magnet on his car.

“I’d like the company to be well used and known that DoorDash is in town,” Penny said. “I get a lot of compliments, though I get negative feedback from other Dashers (saying) we’re independent contractors, we don’t work for DoorDash.”

Even though DoorDash has been available in Del Norte County for about six months, Penny says there’s not much advertising, just the occasional ad on Facebook. A lot of people found out about the service through word-of-mouth, he said.

“A lot of elderly wish they knew how to use it better,” he said, adding that he often goes grocery shopping and picks up prescriptions. “It’s useful for Del Norte County. A lot of people don't want to leave the house, especially with the pandemic.”

Gamez, like Arnett, is a long-time Del Norter who signed up to DoorDash for the extra money. But while it’s still possible to make decent cash, Gamez said she’s competing with a lot of other Dashers.

“It’s pretty much like a regular job,” she said. “I just really hope other businesses sign up for it so it’s not just the same businesses. I know that CVS does it, Walgreens and I just seen that Enoteca’s started doing it.”

Arnett said DoorDashers deliver all the way up to Hiouchi. She said she’s heard of a Dasher making a delivery to someone at Slant Bridge just north of Hiouchi.

Others will go all the way down to Klamath, though experienced Dashers know not to take that trip because of the construction at Last Chance Grade, Arnett said.

Arnett said one reason DoorDashing is a viable option for her and other Del Norters is tipping. Dashers, she said, make about $2 per delivery unless they receive tips.

“I know a lot of people think, ‘They’re already getting paid. They don’t need the money or $1’s just fine,’” Arnett said. “Really and truly, the $2 to go to the store, wait in line and bring it to you, doesn’t even cover our gas. When the app does give you that, ‘Hey, this is what we suggest you tip,’ don’t try to go less. Just know that we actually really do need that.”