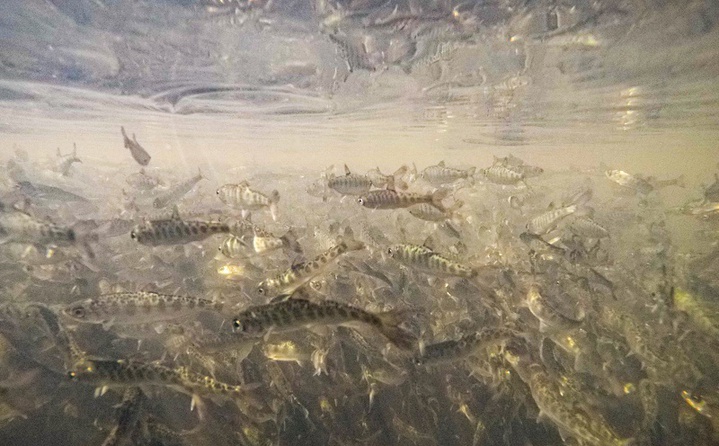 From a Tuesday California Department of Fish and Wildlife news release:

Due to drought and poor water conditions in the Klamath River, the California Department of Fish and Wildlife (CDFW) successfully relocated 1.1 million juvenile, fall-run Chinook salmon from its Iron Gate Fish Hatchery in Siskiyou County. The fish were trucked to a nearby satellite facility and to the Trinity River Hatchery 122 miles away where the fish will remain until conditions in the Klamath River improve.

The baby salmon, about seven months old and about three inches in length, are normally released into the Klamath River in May and June. Due to warm water temperatures, low water flow and an exceedingly high probability of succumbing to disease in the river, CDFW decided to retain these salmon within its hatchery system over the summer until Klamath River conditions improve. The unprecedented relocation happened after extensive monitoring, discussion and close collaboration with federal partners, academic specialists and three Native American tribes in the lower Klamath Basin.

The temporary relocation marks the first time CDFW has not released salmon into the Klamath River since construction of the Iron Gate Fish Hatchery in 1962.

CDFW relocated the 1.1 million salmon to provide adequate water conditions over the summer and additional space to accommodate the growing fish. Another 1 million juvenile Chinook salmon will remain at Iron Gate.

“It’s extremely challenging to raise cold water fish species in a drought,” said Dr. Mark Clifford, Hatchery Environmental Scientist for CDFW’s Northern Region. “The reality is most of these fish would have died if we released them into the river. We need to maintain the integrity of the fall run on the Klamath River and we especially can’t afford to lose this generation of fish.”

Four Klamath River dams are slated for removal by 2024, the largest dam removal undertaking in U.S. history. The removal is expected to restore fish access to the entire river and the relocated Iron Gate fish could be the first salmon to return to a new Klamath River after their life in the ocean and find miles of additional spawning habitat and contribute to future generations of wild fish.

When conditions improve and before the fish are ultimately released to the Klamath River, the relocated salmon will be returned to the Iron Gate Fish Hatchery for a number of weeks to allow the fish to further imprint on the Klamath River. All of the relocated salmon have been outfitted with unique coded wire tags to allow CDFW and other agencies to determine their origin and destination. All of their adipose fins have been removed to visibly identify them as hatchery reared fish.

CDFW thanks its partners for their time and expertise in working through this difficult situation. These partners include the Karuk Tribe, the Yurok Tribe, the Hoopa Valley Tribe, the U.S. Fish and Wildlife Service, the Bureau of Reclamation and NOAA Fisheries.

Video and photos of the salmon relocation along with comments from Dr. Clifford are available for download at the following link:
https://filelib.wildlife.ca.gov/Public/OCEO/Iron%20Gate%20Hatchery%20Chinook%20Relocation/