On Tuesday at about 4:28 p.m., the Brookings 911 Dispatch center took a 911 call about a possible drowning near Social Security Bar on the Chetco River. 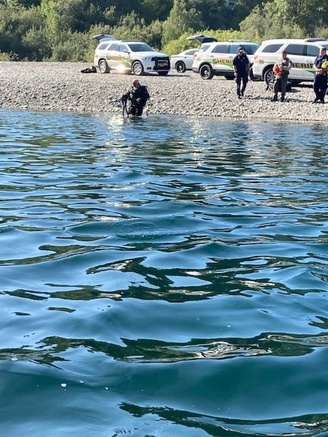 Photo of the scene provided by the CCSO.

Brookings 911 center dispatched the Brookings and Harbor Fire Departments and Cal Ore Life Flight Ambulance crew to the area. At the same time, the information was given to the Curry County Sheriff’s Office Dispatch who immediately sent several Sheriff’s Deputies and Oregon State Troopers to the location.

Brookings Dispatch was advised and relayed to responders that a male subject who had been swimming had disappeared under water and had been under for about five minutes prior to the 911 call. Once Law Enforcement and First Responders were on scene, it was determined there was a male subject submerged in about 12 feet of water in the middle of the river.

Curry County Sheriff’s Patrol Sergeant Jordan White arrived with his dive gear, entered the water, and brought the male subject back to the shore.  The male subject was identified as 47-year-old Carl Martin of Brookings.

Redwood Memorial Services were called to pick up Martin and a call was made to the Curry County District Attorney who authorized the release. The Oregon State Police made notification to the next of KIN.

We are all saddened at the tragic death of Carl and we want to express our sincere condolences to his family.