« Del Norte Receives Freezers Needed To Store Pfizer COVID-19 Vaccine; Rehwaldt Says Seniors, Especially Those Over 75, Next In Line To Get Shots 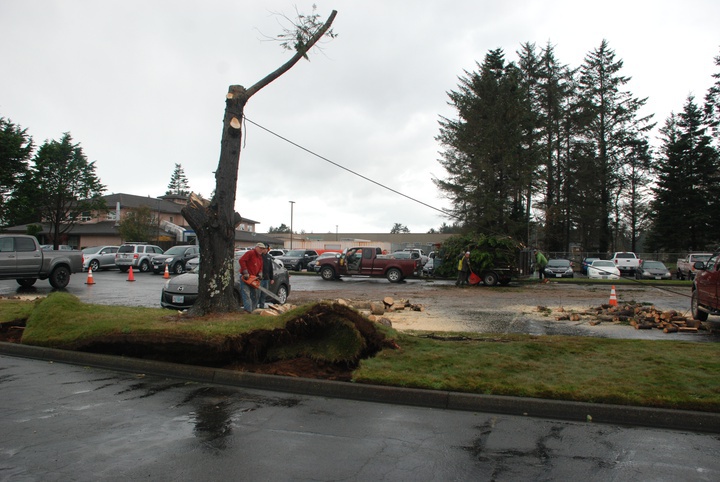 Chainsaws and a truck cleaned up tree debris topped during a storm in 2019. File photo: Jessica Cejnar

Power outages were imminent. Kids were stuck at school, separated from their parents by landslides on highways 101 and 199. People were already posting pictures on social media.

The above scenario — nearly identical to the atmospheric river that doused the county earlier this week — played out in a virtual tabletop exercise among members of the Emergency Operations Center on Thursday.

Tasked with identifying gaps in an Emergency Operations Plan before it’s presented to county supervisors in March, the EOC worked with volunteer agencies including the American Red Cross and the Community Emergency Response Team.

“It was a difficult scenario today and it seemed like for every problem, we came across somebody that had a way to come up with a solution for it,” Kymmie Scott, the county’s emergency services manager, told the Wild Rivers Outpost. “I thought we might stumble more than we did.”

The updated Emergency Operations Plan includes several “annexes” that have a deeper focus on various aspects of a disaster such as volunteer and donation management, what to do with debris, economic resilience — a new one borne from the COVID-19 pandemic — evacuations and transportation.

Scott said the goal is to fix whatever didn’t “work that well” in Thursday’s scenario before it goes to the Board of Supervisors for approval.

One area that needed improvement was the need for written agreements among the various local agencies and businesses in Del Norte County — something Scott said she is working on. This includes memorandums of understandings with Del Norte Unified School District to be able to operate a shelter at its campuses, with Redwood Coast Transit to use its buses and with the Del Norte County Fairgrounds to house livestock that may need to be evacuated.

Scott said the Del Norte County Fair Board’s legal counsel was reviewing a new contract with the county that clarifies its role when it comes to sheltering people and animals during an emergency. This includes costs associated with an emergency shelter, she said.

Maintaining a list of facilities, businesses and other entities that have backup generators, such as the fairgrounds’ main building, is also needed, Scott said. About 265 individuals in Del Norte County rely on electricity to power oxygen tanks, wheelchairs and other medical devices. Figuring out who has a generator and how long it could run needs to be addressed, she said.

“We’re like a handshake community,” Scott told the Outpost. “We work with a lot of different partners a lot of the time and there’s never been a problem in working with people.”

In talking through Thursday’s exercise, Crescent Fire Chief Bill Gillespie said if Last Chance Grade becomes active — which was seen Tuesday, he noted — Klamath residents could be cut off.

Scott pointed out that flooding in the community’s low lying areas, particularly the Resighini Rancheria, could turn it into an island. Some residents may shelter with family or friends if they were displaced, Scott said, but she recommended getting in touch with Resighini Rancheria to see if anyone needed help.

Local American Red Cross representative, Mary Dorman, an agent with State Farm Insurance, said the organization has cots, blankets as well as comfort kits for children. The organization can set up a non-congregate shelter at the Redwood Hotel and Casino in Klamath and at Howonquet Hall in Smith River, she said. But if people needed to be fed, the Red Cross would need to figure out how many needed food and how to go about getting it to them.

Scott responded to Dorman’s question, saying that a feeding and community resources annex is on the list of things that need to be finished to finalize the plan.

“We’ve had preliminary conversations with the Food Council and the Senior Center on doing it, but we don’t have a solid plan in place right now on how to feed a bunch of people other than what we’ve just done in the past,” Scott told Dorman.

Gillespie also brought up the need to ensure that emergency responders are having their needs met. He noted that if the Emergency Operations Center is running on a 24-hour basis, it’s important to have people that can run in shifts to prevent accidents due to fatigue.

Kim Smith, Crescent City’s safety officer, voiced this concern as well, noting that during a big rain event, work crews are working to keep storm drains open. If the power goes out, they may need to bring generators to the lift stations to keep the community’s wastewater system online.

Then, Smith said, there’s also the turbidity of the water system. Now staff is needed to flush fire hydrants and to adjust chemical feeds, he said.

If the lift stations were damaged, City Manager Eric Wier said they may have to mobilize trucks to deal with overflow and ask people not to use their bathroom facilities until they could be repaired.

“We have to mobilize trucks and in a certain extent plan for an overflow and try to mitigate those situations,” Wier said. “We’ll have to get with public works, get with operations and understand where the overflow is going to occur. Keeping the public out of that is going to be key.”

Once the fictional rain and wind tapered off in Thursday’s exercise, National Weather Service meteorologist Ryan Aylward warned participants that hazards still existed. This includes flooded buildings and rivers that were continuing to rise.

“When the rain stop that doesn’t mean flooding stops,” he said.

A number of homes suffered damage from water backup, said Ashlee Delventhal, director of preparedness, resiliency and emergency management for Tidal Basin Group. A large tree fell on Mountain School in Gasquet. And Safeway, Crescent City Cinemas, Motel 6, CVS and Westward Inn were closed due to damage, she said.

Wier noted that the EOC has a Structural Analysis Program team that can determine if a building is safe or unsafe. It’s a certification that’s good for two years, but many people that are in that team need to be re-certified. Wier said he would work with Del Norte County Community Development Director Heidi Kunstal and Mike Young, a local engineer who is a certified instructor.

Once the Board of Supervisors adopts the Emergency Operations Plan in March, Scott said she and the Del Norte Office of Emergency Services will begin planning for another exercise in October based on a full scale tsunami evacuation.

This exercise will test new tsunami evacuation plans that will go before the Board of Supervisors later this month, Scott said, and will include the public.

“The new maps aren’t significantly different, but they are somewhat different,” she said. “We want people to sort of practice with us so they get that muscle memory on how to respond to a tsunami. And by having a lot of public participation in that event, it’ll help our first responder teams and Emergency Operations Center team do that as realistic as possible so we can be as well prepared as possible for a real event should it ever occur.”