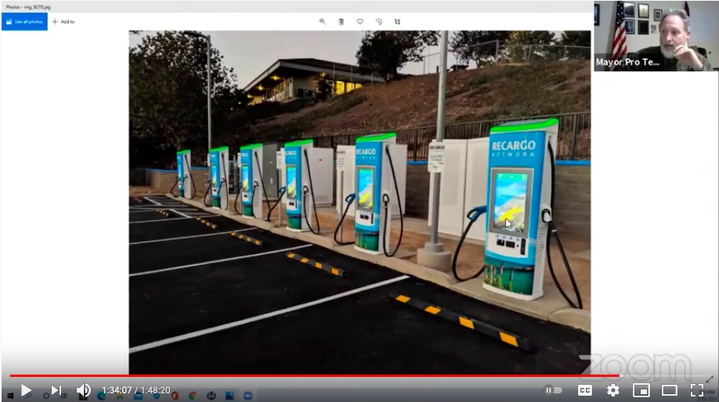 Renewable energy companies, Cleantek and Recargo, plan to put their charging stations in the parking lot across from D Street in Crescent City. Councilors on Tuesday unanimously approved a preliminary site plan — necessary for the two companies to receive a California Energy Commission grant — but the proposal still requires Planning Commission approval, according to Public Works Director Jon Olson.

The Council’s approval Tuesday also includes the caveat that the exact location for the charging stations, at Front and D streets, “is not set in stone,” according to City Attorney Martha Rice.

The project will also require approval from the Public Works department before the Council approves a final licensing agreement between the city, Cleantek and Recargo, Olson said.
“We want to make sure this is an amenity that’s desirable — that it combines with the Beachfront Park masterplan and Front Street masterplan,” he told Councilors.

Cleantek and Recargo are proposing the charging stations in Crescent City as part of an application for a larger grant from the CEC that includes another station in Smith River, Olson said.

“They park, they charge their cars, they go and they frequent businesses, downtown shopping. They’re here for whatever time period it takes to charge their car,” he said. “The other piece of this that will come back to the Council will be some sort of agreement if they have this facility here, they would pay the city for that location. We don’t know the exact number yet, but it could be several hundred dollars per parking space — that’ll be worked out with the company at a later date.”

If the Council didn’t take action by April 1, Wier said, Cleantek and Recargo could lose the CEC grant.

In addition to the two charging stations, a switch gear will also be installed similar to the ones accompanying the Tesla stations near the library, which would require architectural review from the city, Wier said.

Architectural review focuses on the aesthetics of the charging stations and accompanying infrastructure, according to Olson.

“The idea of taking it through architectural review is, we’re potentially putting some big ugly boxes in the middle of beautiful Front Street and what can you do to soften those impacts or are there options to locate that in a less prominent location,” he said, adding that they would include hand-held units similar to a traditional gas pump. “Are there certain screenings you can do? Those are items the Planning Commission will be looking at and evaluating.”

The final agreement the Council would have to approve would be similar to an encroachment permit allowing the two companies to install their equipment in the city’s right-of-way, Wier said. The companies would pay the city roughly $200 per charging station, he said.

Olson said Cleantek and Recargo would be responsible for maintaining the stations. He also added that though laying the conduit would require some trenching, impacting 5-10 linear feet of asphalt, it wouldn’t be impacting the new part of Front Street.

Though he was happy to hear this, Crescent City Mayor Pro Tem Blake Inscore wasn’t entirely pleased with the location. After looking at the parking lot’s proximity to nearby businesses, Inscore said he spoke with representatives at SeaQuake Brewing “‘cause obviously they’re the primary business down on that end.”

Inscore said he didn’t think the corner of D Street was an appropriate location for the charging stations.

“I think the appropriate location is the corner of E Street,” he said. “It still has proximity for those who might be traveling through the area with an electric vehicle and may want to go to SeaQuake ‘cause it’s kitty corner, but it doesn’t block overflow parking directly across the street between D and E.”

Inscore noted that it’s difficult, even for locals, to find a parking space in the area.

Inscore mentioned the Tesla stations are only for Tesla vehicles while the Cleantek and Recargo stations would be for any electric vehicle.

“These are these rapid chargers,” he said. “You can come in and if you go in for dinner, you can get down the road to where ever you’re going next on this fast charge.”

According to Olson, the reason the stations are proposed for the corner of D Street is because it’s closest to the existing transformer on the south side of Front Street.