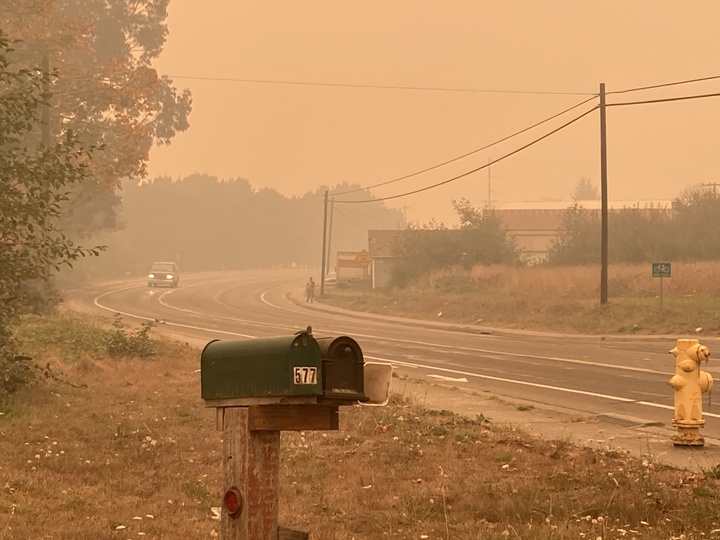 The scene on Elk Valley Road at about 2:55 p.m. Tuesday. Photo: Jessica Cejnar

Offshore winds have blown smoke from several wildfires toward the coast, while a new fire near Happy Camp is contributing to current conditions in Del Norte County, according to a National Weather Service meteorologist.

The fire is burning near the Slater Butte Lookout and has caused the closure of State Route 96 to eastbound traffic about 2 miles west of Happy Camp and to westbound traffic west of Seiad Valley, according to Caltrans District 2.

Offshore winds, generated by an early season low-pressure trough, are blowing smoke from the Slater Fire directly into Del Norte County, according to National Weather Service meteorologist Josh Wood. Those winds are expected to be gusty, especially on high ridges, and will likely contribute to another wave of smoke inundation for Del Norte on Wednesday, Wood told the Wild Rivers Outpost.

“The new fire in Siskiyou (County) is pushing smoke due west, right on you,” Wood said.

Communities in the Klamath River drainage, including Orleans and Weitchpec, are seeing overall unhealthy conditions.

Smoke can cause eye and throat irritation, coughing and difficulty breathing, according to the news release. Those who are at greatest risk of experiencing these symptoms include those with respiratory diseases such as asthma, heart disease, young children and older adults.

People are advised to stay indoors and avoid prolonged activity during smoky conditions, according to the news release.

“People should keep their go bags handy and make sure they’re signed up for community alerts,” she said. “But if they see something that looks threatening, don’t wait for an alert. If they see fire, they should move.”

To sign up for emergency alerts, visit Prepare Del Norte.